What, Again? Sea Level Will Continue Rising for Centuries

Summary: This series of three posts tabulates important findings from the six Assessment Reports (ARs) that the United Nations Intergovernmental Panel on Climate Change (IPCC) has released since 1990.  The first post, “What, Again? Greenhouse Gases Accumulate in the Atmosphere, presents past greenhouse gas (GHG) emission rates and future emission scenarios in the ARs, and presents principles in the ARs to keep accumulated GHG levels to as low a level as possible.

The second post, “What, Again? Global Warming Continues Unabated” summarizes the effects of higher GHGs on past and future projected global temperatures, and reiterates the need conveyed in the ARs to constrain GHG emissions by decarbonizing the energy economy.

This third post reviews specifically the effects of warming on our water environment: melting ice domains and rising seas, and extremes of precipitation or droughts. The six ARs warn humanity to bring future GHG emissions to near zero; but sea level rise (SLR) is distinguished because melting of ice has passed a threshold of irreversibility: SLR will continue for centuries or longer.

Some may feel this series repeats refrains, looping like broken records; such people may suffer from “climate fatigue”.  Humanity, however, has not responded to the worsening climate documented in the AR series. The critical, dire climate projections summarized in these posts provide powerful incentives finally to take meaningful action at this time.

The United Nations Intergovernmental Panel on Climate Change (IPCC) released the first of the three parts of its Sixth Assessment Report (AR6) in August 2021.  ARs have been issued at intervals of 6-7 years since 1990. They document the history of the annual rate of global emissions of the principal GHGs, arising from human activity, and of the total amount of GHGs accumulated in the atmosphere since the industrial revolution began.  Using climate models and a range of scenarios of GHG emission rates from relaxed to stringent they present projections for each scenario of future climate characteristics and effects to the end of this century.  They also discuss general goals (but not specific actions) for limiting future emission rates.

The results and projections presented in ARs 1-6 are broadly consistent with each other across the AR series, but have greater specificity and stronger assessments of likelihood as the series progresses.  All the ARs have stated the need to limit further accumulation of GHGs in the atmosphere in order to minimize the effects of global warming on Earth’s climate.  The faster that emission rates are reduced toward zero, the lower will be the total accumulation of GHGs in the atmosphere.  The cartoon below of two cars traveling down the GHG highway captures this message.

The topics selected for this post, tabulated below in the Details section, are Past Sea Level Rise (SLR) and precipitation (column 2), Projected Sea Level Rise and precipitation (column 3), and Recommended Actions (column 4).  Column 2 in the table documents the greater severity (and the greater detail of the data) of melting of glaciers and ice sheets feeding SLR, as well as extreme precipitation events in the later ARs, across the 30 years that the ARs have been issued. Column 3 details projections for future SLR, which are projected to continue for centuries or millennia regardless of mitigation measures that may be applied in the future.  SLR has two contributions (first mentioned in column 3 of the table for the AR2 entry), the expansion of water of the oceans as its temperature rises, and addition of new water to the oceans as glaciers and ice sheets continue to melt.

The second factor, melting of ice, has reached the stage of being irreversible because the Earth has warmed sufficiently.  A model for melting glaciers or ice sheets is presented in the graphic below: 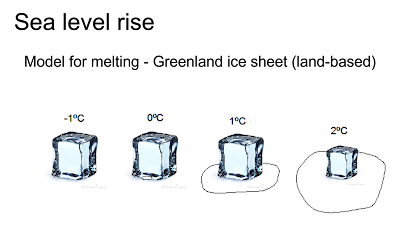 The melting point of ice is 0°C.  At or below this temperature an ice cube in your refrigerator is stable, and does not melt.  Even a little above this melting point, say at 1°C, the ice cube begins to melt slowly and forms a small puddle as shown.  At 2°C the model shows even more melting, yielding a smaller ice cube and a larger puddle.  Now suppose the refrigerator cools back down to less than 0°C.  The water in the puddles is not magically restored to the remaining mass of the ice cube, but freezes in place.

Extending the above model and its description to nature, the melted water flows away and ultimately drains into the ocean.  The glacier or ice sheet will be restored only if the year-round average temperature is less than 0°C and there is new precipitation as ice or snow.  But enough GHGs have already entered Earth’s atmosphere to warm the air over glaciers and ice sheets, tilting the balance toward net melting, assessed year-round.  This is why climate projections in column 3 of the table below foresee continued SLR for hundreds or thousands of years even if a way is ultimately found to remove accumulated GHGs from the atmosphere. For melting ice sheets and glaciers the “tipping point” has already been reached, and is irreversible on time scales of interest to humans.

The Recommended Actions summarized in column 4 of the table emphasize the need for significant lowering of the rate of emissions of GHGs, coupled with adaptation measures to address aspects of warming that cannot be remedied by mitigation.  This need was presented already in AR1 (1990), saying that immediate 60% reductions in emission rates …would stabilize atmospheric GHGs at the then current level.  In one way or another analogous remedies were presented in the succeeding ARs.  By AR6 (2021) the table’s summary urges substantial emissions reductions over the next few decades to reduce longer term climate risks.  Even so the AR warns with high confidence that warming by 2100 will lead to a high risk of severe, widespread and irreversible impacts, including flooding, droughts and continued SLR.

Whereas the need to reduce emissions was expressed as early as AR1 and extends up to the present in AR6, the strength of climate science underpinning those conclusions has increased dramatically over time.  The capabilities of gathering data and using more powerful computers to analyze them, and to develop more refined, detailed climate models have all increased dramatically.  (Incidentally the Nobel Prize in Physics, awarded October 5, 2021, recognized the development of early climate models.  These have served as the foundation for today’s highly refined models.)

Recent ARs reflect this enhancement in data gathering and climate modeling.  For example  the current first part of AR6 was compiled by 234 climate scientists chosen from the nations of the IPCC.  They reviewed over 14,000 research articles published since AR5.  Drafts of the chapters in AR6 were reviewed by other scientists as well as by national governments and revised accordingly.  We can feel assured that the final text represents scientific and political consensus views.

Column 4, “Recommended Actions” in the table shown in the Details section summarizes the increasing urgency of acting to reduce annual emission rates to near zero as the AR series progresses.

Indeed, actual extreme weather and climate events have become the subjects of frequent current headlines, documenting actual heat waves and droughts, famine, uncontrolled wildfires, intense precipitation events and flooding, and melting of glaciers and ice sheets leading to sea level rise, effects that were only predicted in the early ARs.  Also, by AR6 the science of attribution of extreme climate events has progressed dramatically, and permits ascribing the severity, if not the actual occurrence or not, of events to the effects of human-induced global warming.

Early action such as recommended in earlier ARs could have been taken at moderate levels of effort and expense (“Gentle Braking” in the first graphic above) to avert future, if not yet apparent, climate hazards.  But policymakers around the globe did not seize these opportunities to anywhere near the needed extent.  By 2021 such extreme events are now current, requiring immediate action.  Necessarily these current actions must be far more aggressive, pervasive and costly (“Hard Braking” in the graphic) in order to deal with a warming Earth approaching criticality.  They also require fundamental and comprehensive changes in social and cultural approaches to adapt to the consequences of warming.

Unequivocally we must encourage our political, corporate and civic leaders to embark on bold, comprehensive actions without further delay.

This writer collated the entries in the following table from either the Summary for Policymakers, a “Headline” document or a press release, all issued by the IPCC in conjunction with each AR.  The entries are necessarily selective rather than comprehensive, and have been edited for brevity.

Posted by Henry Auer at 4:43 PM No comments: