Summary.  In the and across wide regions of the globe, 2011 and 2012 have recorded heat waves and droughts at or near record levels.  These have severely impacted yields, and prices, of world staple grain crops.


OXFAM has issued a new report that projects impacts of global warming on staple grain crops and prices up to 2030.  As a baseline, it shows that yields and prices will rise significantly as a lon-term trend over this period.  But more importantly the effects of regional short-term extreme weather “shocks” must be added to the long-term trends.  These can produce serious crop and nutritional deficiencies, especially in regions of poverty around the world.  OXFAM urges renewed efforts to mitigate global warming, and investments by developed countries to help poorer nations adapt to the effects of long-term warming and short-term shocks on agricultural yields and nutritional status.

Introduction. Recent years have seen increases in the occurrence and intensity of extreme weather and climate events to an extent having no precedent in earlier decades or the previous century. Examples that come easily to mind include, at various times and locations around the planet, heavy rain and consequent flooding, prolonged heat waves accompanied by drought, and a high frequency and extent of forest wildfires.


The Intergovernmental Panel on Climate Change (IPCC), an organization of hundreds of climate scientists from all around the world, operating under the auspices of the United Nations, issued its Fourth Assessment Report (4AR) in 2007.  4AR indicates that, as a result of man-made increases in the concentration of atmospheric carbon dioxide (CO2) and other greenhouse gases (GHGs), the long-term global average temperature has increased since the industrial revolution began and will continue to do so.


Extreme weather events are consistent with trends anticipated by the IPCC in 4AR and its 2011 report on this subject (SREX; see Note 1).  4AR and SREX foresee that this warming will lead to warmer daytime as well as nighttime temperatures, increases in dryness and drought conditions in certain regions of the world, and increases in intense rainfall and flooding in others.


The Briefing provides examples of recent extreme weather events consistent with the expectation of higher temperatures and rainfall or drought foreseen by the IPCC.  These include:


as of July 2012, the has experienced its hottest 12-month period on record;


in the , the heaviest rainfall on record fell between April and June 2012, and it experienced the highest November temperatures in 100 years in 2011; and


The Briefing points out that single events cannot be categorically attributed to worsening warming of the planet, but rather that long-term warming trends have a much higher probability of occurring; it cites as examples the 2003 European heat wave and the 2011 heat wave and drought in , in the U. S.


The post “ExtremeWeather Events and Global Warming” summarizes two current research papers confirming, by rigorous statistical analysis, that recent heat waves are unprecedented in history. Hansen and coworkers conclude there is a “high degree of confidence that events such as the extreme summer heat in [] in 2010 and in 2011 were a consequence of global warming”.  Coumou and Rahmstorf conclude “it is very likely that several of the unprecedented extremes of the past decade would not have occurred without [man-made] global warming….the evidence is strong that [man-made], unprecedented heat and rainfall extremes are here — and are causing intense human suffering.”


OXFAM’s Model Foresees Higher Crop Prices Because Of Warming.  The model used in the Briefing predicts long-term trends for commodity prices of the staple foods maize (corn), wheat, and rice, for the period ending in 2030.  To establish accuracy, the modeling process was used to reproduce the effects of historical weather events on crop yields from 1979-2009.  It terms this long-term trend its baseline modeling.


The Briefing foresees significant worldwide increases in food staple prices by 2030, approximately doubling by 2030 over the price levels of 2010.  For example, baseline average world prices would rise


for maize, by 177%, with almost half being due to the effects of warming;


for wheat, by 120%, of which about one-third is due to the effects of warming; and


for processed rice, by 107%, of which about one-third is due to the effects of warming.


The predicted price trends are the consequence of the long-term warming trend in the world’s climate.  For that portion of the world’s population living in poverty, these price increases are expected to impose the greatest hardship because the fraction of their personal incomes devoted to procuring food is already high.  Further price increases would impose even greater stress on these people.


But the Briefing presents even more stark predictions of the effects of single, short-term extreme weather events affecting crop yields, which it calls “shocks”.  Details of the effects of shocks depend, in its view, on whether the affected region is exposed to pricing from world commodity markets or is sufficiently isolated that it depends largely on local and regional farming to establish availability and pricing of staple foods.


Nevertheless, shocks can have a major impact on the nutritional health of affected populations in two ways.  First, obviously, the price paid for a food staple will spike abruptly from an extreme weather shock, adding to any price elevation arising from the long-term trend.  But additionally, the effects of the shock commonly reduce the resources available to affected populations that can be used to purchase the commodity or staple at the spiked price.  The Briefing presents the following graphic as an example of the effects on world prices of wheat and maize from a climate shock in . 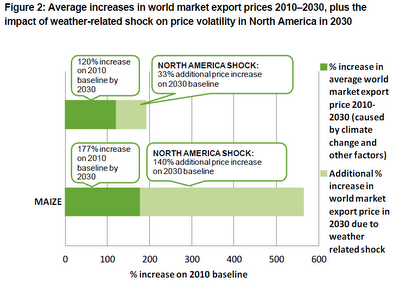 Dark Green, Price increase from 2010 to 2030 due to baseline climate projection; Pale Green, additional price increase beyond the baseline projection due to a modeled short-term climate shock.  From context, the author presumes that the upper bar should be labeled “WHEAT”.
© OXFAM GB, permission to reproduce this image granted.
Source: Oxfam, “Extreme Weather, Extreme Prices”; http://www.oxfamamerica.org/files/Extreme-Weather-Extreme-Prices.pdf.
From another graphic in the Briefing, other examples of the effects on prices expected in 2030 from a shock from an extreme weather event include:
, for a drought comparable to that in 1992, an increase in maize price by about 50%;
Southern Africa, for a drought and flooding comparable to that in 1995, an increase in maize price by about 120%; and
and , for poor harvests generally, an increase in processed rice price by about 25%.
Effects in sub-Saharan are likely to be very large because this is an example of a region not tied commercially to global commodity markets.  The Briefing notes that by 2030 95% of the maize and other coarse grains consumed is likely to be produced regionally.  Therefore a short-term climate shock could reduce amounts available for consumption by as much as 54%, while consumption of processed foods would fall by only 4%.
This writer reported in “Economic Costs of Extreme Weather Events Due to Global Warming” that the drought in Russia in the summer of 2010, which lowered yields and led to a ban on exporting wheat, produced an increase in the world commodity price of wheat by 71% over the year ending April 2011.
OXFAM Considers Its Projections To Be Conservative.  Additional factors worsening the effects on commodity prices were not incorporated into the model.  These include competition for cropland and crops produced by diversion into biofuel production, and impacts of low food stocks at any time; actual intensities of climate shocks experienced by 2030 may be greater than those used in the model drawn from the baseline years 1979-2009; and cumulative effects of simultaneous or consecutive shock events.
The Briefing concludes that a warming world requires strong action to help vulnerable regions of the world survive long-term and shock effects of the climate on availability of nutrition.  It summarizes adaptation mechanisms that need to be taken to make agriculture in developing countries more robust, and more capable of accommodating the added stresses of population growth.  It notes that investment in local agriculture, sustainable methods and resilient crops has been lacking in recent decades, and should be increased.
It calls on developed countries to live up to earlier commitments to adequately fund adaptation mechanisms, such as the Green Climate Fund.  This call to action is all the more important because, as the Briefing notes, it is expected that greenhouse gas emissions will continue to rise, leading to higher accumulated concentrations in the atmosphere as time passes.  This higher concentration is foreseen to lead to an average warming of 2.5-5ºC (4.5-9ºF) during this century.  If this trajectory of increased emissions and higher temperatures remains unabated, the Briefing foresees serious consequences in the availability of food resources, affecting especially the most vulnerable and poorest populations of the world.
Conclusion
Severe droughts in the agricultural midsection of the , and in , during the summer of 2012 have led to decreased grain harvests (posted online in the Huffington Post (accessed )).  It states that, according to the U. S. Department of Agriculture (USDA), as of mid-September 2012, the corn crop will be the worst in six years and the soybean crop will be the lowest in nine years.  USDA also reports that the wheat crop in and neighboring regions is 9% lower than an estimate from August 2012, and that the world wheat crop is 5% lower than one year ago.  The decreased yield of wheat in Russia arose presumably from excessive heat over the January-August 2012 interval, contributing, with the record heat in the U. S., to making worldwide land surface temperatures over this interval be the sixth warmest on record (U. S. National Oceanographic and Atmospheric Administration).  These extremes are due at least in part to global warming, according to an Op-Ed article by Mark Hertsgaard in the New York Times, Sept. 13, 2012. In a retrospective study, Lobell and coworkers found (see “Decreased Worldwide Crop Yields Are Tied to Global Warming”) that the worldwide yields for maize and wheat declined by 3.8% and 5.5%, respectively, between 1980 and 2008 (yields for soybeans and rice showed no clear trend over this period).
Here, the Briefing by OXFAM GB projects future effects of long-term warming of the planet, and of short-term extreme weather shocks, on crop yields and commodity prices for staple foods around the world.  The warming and shock events are projected to adversely affect yields and lead to lower availability and higher prices.  These will impact the poorest populations of the world the most, causing great suffering, and producing a need for emergency interventions for short-term relief.
It is important for the developed countries of the world to invest both in abating emissions of greenhouse gases so that the temperature of the world ultimately stabilizes.  Additionally they should maintain their commitments, expressed in international meetings, toward those less well off, by helping poorer countries accommodate to the increased stresses on food availability.
Note 1. IPCC, 2011: Summary for Policymakers. In: Intergovernmental Panel on Climate Change Special Report on Managing the Risks of Extreme Events and Disasters to Advance Climate Change Adaptation [Field, C. B., Barros, V., Stocker, T.F., Qin, D., Dokken, D., Ebi, K.L., Mastrandrea, M. D., Mach, K. J., Plattner, G.-K., Allen, S. K., Tignor, M. and P. M. Midgley (eds.)]. Cambridge University Press, and ; http://ipcc-wg2.gov/SREX/images/uploads/SREX-SPM_Approved-HiRes_opt.pdf
© 2012 Henry Auer