2014 Was the Warmest Year Globally Ever Recorded

2014 had the highest global average temperature ever recorded.  The U. S. National Oceanic and Atmospheric Administration (NOAA)  and National Aeronautics and Space Administration (NASA ) jointly announced on Jan. 16, 2015 that the year 2014 was the hottest year since record keeping began in 1880.  This result represents the globally averaged temperature, for both land and ocean surfaces, over the entire year.


A 1½ minute video from NASA gives more information on this finding.  It includes a speedy review, year-by-year and location-by-location across a map of the globe, of how annual average temperatures, in ºC (multiply by 1.8 for ºF), have increased from 1957 to 2014.  (They are shown as the differences from a 30-year reference period from about 1945 to about 1975).

The ten hottest years on record occurred between 1998 and the present (see Details section at the end of this post).


[Update added ]: The United Kingdom Met (i.e., meteorological) Office jointly with the University of East Anglia reported, using their own data set, that 2014 was tied with 2010 as the being the warmest year on record, within the 95% confidence limit of their data.  This occurred even though 2014 did not experience a warming event known as El Nino.

The “pause” in rising temperatures of recent years is misleading. The new warm record for 2014 is significant because those who doubt the reality of global warming have pointed to an apparent “pause” in warming from about 1998 through 2013 (i.e., up to the time of the new NOAA/NASA report).  The apparent “pause” may be seen in the image below, compared to the clearly rising temperatures before 1998. 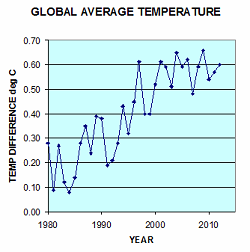 
The new result for 2014 places its data point slightly higher than the two next-warmest years, 2005 and 2010.  Although it is too early to tell, the new information suggests that the earth may be resuming its climb to higher global average atmospheric temperatures.


The “pause” is understood to be temporary, in any case, in view of the image below. 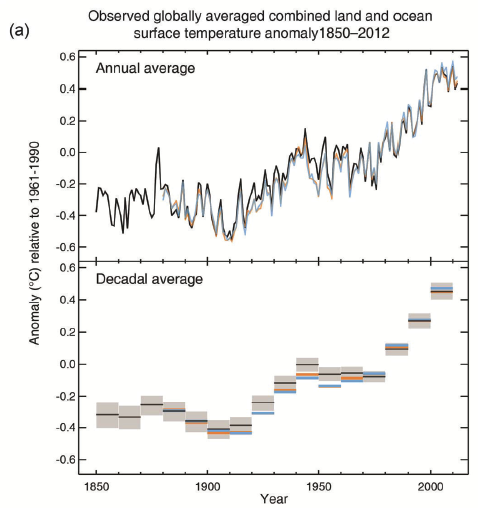 The graphic shows that there was an even longer “pause” between the late 1940’s and the mid 1970’s; nevertheless, that “pause” ended and the global average temperature rose dramatically in the three following decades.  Since trends in global warming become apparent only on long time scales, a decade or longer, the bottom panel in the graphic above, presenting atmospheric temperatures as ten-year averages, suggests that the purported “pause” in the first decade of the 21st century may not be a significant “pause” at all.


Ocean Heat Content.  The temperatures discussed above relate only to surface air temperatures around the globe.  But 90% of the excess heat retained by the earth system is absorbed in the oceans, measured in an upper zone down to a depth of 700 m (2,296 ft), as well as in a deeper zone from the surface to 2,000 m (6,562 ft).  A graph showing the time dependence of the ocean heat content to both depths is seen in the image below. 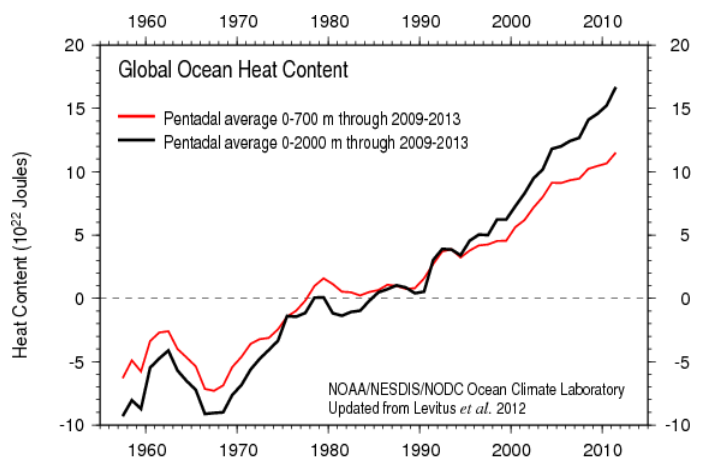 Significantly, the image above shows clearly that during the present “pause” in the global average air temperature (1998-present) heat continued to accumulate in the waters of the oceans down to 2,000 m without any “pause”.  Thus, most of the excess heat absorbed by the earth system due to global warming is stored in the oceans.  Climate scientists have identified the role of the oceans in storing excess heat in recent publications, and pointed out that sooner or later that excess heat will be transferred back to the atmosphere (see Details, below).


The year 2014 had the hottest annual global average air temperature since record keeping began in 1880.  This result, and related information presented by NOAA and NASA, indicate  that there may be no significant “pause” in warming of the air temperature of the Earth, contrary to statements made by global warming skeptics and deniers.  The climate scientist Michael E. Mann, at the Pennsylvania State University, wrote  “It is exceptionally unlikely that we would be witnessing a record year of warmth, during a record-warm decade, during a several decades-long period of warmth that appears to be unrivaled for more than a thousand years, were it not for the rising levels of planet-warming gases produced by the burning of fossil fuels.”  Stefan Rahmstorf, head of earth system analysis at the Potsdam (Germany) Institute for Climate Impact Research stated   “[T]he fact that the warmest years on record are 2014, 2010 and 2005 clearly indicates that global warming has not ‘stopped in 1998,’ as some like to falsely claim.”


Indeed, 90% of the excess heat retained by the earth system is absorbed by the oceans, a process continuing without a “pause” up to the present.  Long-lived ocean currents redistribute this heat around the earth and among zones of varying depth.  It takes many years for heat to re-emerge to the surface and exchange back into the atmosphere.  Yet it is considered essentially certain that this will indeed occur.


Global warming due to continued emissions of greenhouse gases will continue indefinitely unless greenhouse gas emissions are reduced.  If the peoples of the earth succeed in lowering annual emission rates to near zero, further warming will come to an end, and the earth will experience a new, higher global average temperature than we have now.  We must strive to reduce annual emission rates to (near) zero in order to minimize the additional warming of the earth.

The ten hottest years on record occurred between 1998 and the present.  The second hottest years, only slightly less warm on average than 2014, were 2005 and 2010 (see the first graphic above).   The finding that 2014 exceeded all other records is even more significant because it occurred in a year in which the El Nino Southern Oscillation, a warming pattern in the , was absent.


NOAA presents the global map, below, showing deviations in temperature from the reference period 1981-2010 as color-coded shades grading the deviations from the average. 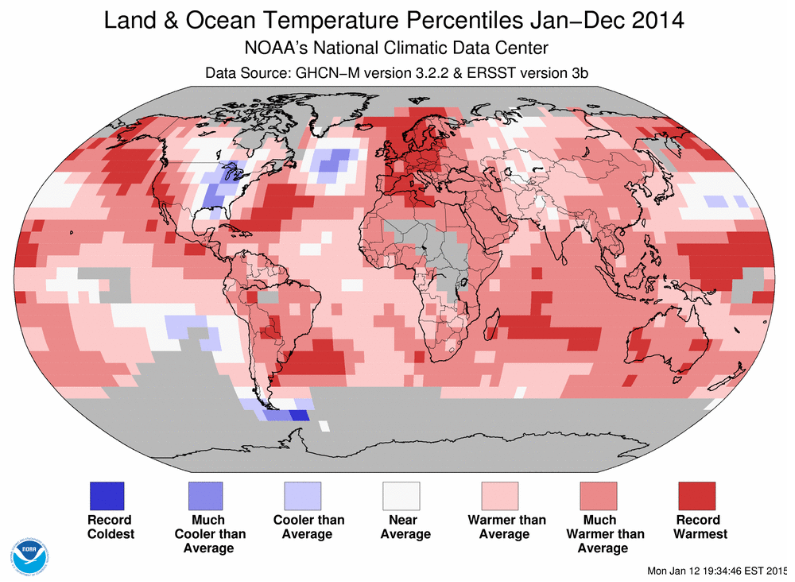 The image above is noteworthy, since it shows that there were many regions, both on land and oceanic, recording record warmest average temperatures whereas there was only one region, south of , having a record coldest average temperature.  Indeed, most regions of the earth, both land and sea, had temperatures in 2014 higher than the 1981-2010 average.
Climate scientists have pointed out in recent publications that heat is accumulating in the oceans and that sooner or later the excess heat will re-emerge, so that the global average air temperature will resume climbing.


Loeb and coworkers (Nature Geoscience, vol. 5, pp. 110–113 (2012) doi:10.1038/ngeo1375) compared the energy imbalance of the Earth system with ocean heat content.   Combining satellite temperature measurements and ocean heat measurements to 1,800 m (5,900 ft) they found “between January 2001 and December 2010, Earth has been steadily accumulating energy at a [significant rate]. We conclude that energy storage is continuing to increase in the sub-surface ocean.”


Guemas and coworkers (Nature Climate Change vol. 3, pp. 649–653 (2013) doi:10.1038/nclimate1863)  examined the current “pause” in global warming.  Using historical ocean temperature data and a coupled ocean-atmosphere climate model, they “attribute the onset of [the “pause”] to an increase in ocean heat uptake.”  They verify that no reduction in the sun’s radiation was found which could explain the “pause”.

Chen and Tung (Science Vol. 345, pp. 897-903 (2014)  DOI: 10.1126/science.1254937) analyzed earlier data as well as more extensive newer observations gathered by buoys disposed worldwide at various ocean depths.  They found that “the [“pause”] is mainly caused by heat transported to deeper layers in the and the Southern oceans….Cooling periods associated with the latter deeper heat-sequestration mechanism historically lasted 20 to 35 years.”  They further conclude “because the planetary heat [reservoirs] in the and the Southern Oceans remain intact, the [“pause”] should continue on a decadal time scale. When the internal variability that is responsible for the current [“pause”] switches sign, as it inevitably will, another episode of accelerated global warming should ensue.”