The U. S. National Climate Assessment: Effects of Warming and Measures to Counteract Them

Summary. The Third U. S. National Climate Assessment, a federally mandated project, reports on the current status of global warming in the and its harmful effects on the population and the environment.  As a result of manmade emissions of greenhouse gases, damages resulting from harsh warming events and extreme weather events have been worse than in earlier periods.  They are projected to be become even more severe by the end of the present century in the absence of meaningful action to combat them.


Mitigation and adaptation measures are available and need to be implemented to limit further warming and its harmful effects by 2100.


Important procedures involved in combating further warming include risk assessment and evaluation, and iterative (cyclical) sequences of planning, decision-making and implementation of projects, coupled with critical analysis of steps in these processes along the way.  Applying the results of such analysis back to optimize the steps should be done repetitively in order to achieve desired goals.


Introduction.  The Third U. S. National Climate Assessment(NCA) was issued in May 2014 as mandated under the Global Change Research Act of 1990.  It discusses the man-made origins of contemporary global warming and the detrimental effects it is having on the , presents projected future trends of warming and its effects, and discusses how the can embark on measures to combat these phenomena. Its tasks, however, do not include formulation of specific policies to address global warming.


An earlier post briefly presented important climatic changes observed around the world, as documented in the NCA.  It then rigorously developed the scientific findings that support the conclusions that a) humanity’s burning of fossil fuels (and deforestation activities) has caused, and continue to be responsible for, the increase by 40% of the atmospheric concentration of the greenhouse gas (GHG) carbon dioxide (CO2) since the industrial revolution; and b) the increased CO2 causes the global warming we are now experiencing.  This post summarizes some of the findings of the NCA on current and projected effects of global warming in the , and how to address its damaging effects.


This post and the earlier one are based on a Fact Sheet distributed by email by Bess Evans in the White House Office of Science and Technology Policy, and on the NCA Highlights (Melillo, Jerry M., Terese (T.C.) Richmond, and Gary W. Yohe, Eds., 2014: Highlights of Climate Change Impacts in the United States: The Third National Climate Assessment. U.S. Global Change Research Program).


Significance of the NCA.  The NCA was prepared by hundreds of scientists and experts, overseen by federal officials from thirteen departments and agencies (see the earlier post).  Its procedures assure that the results reflect the highest scientific standards and are presented in an objective, unbiased manner.


Effects of Global Warming Already Under Way.  The NCA presents the following graphic as one way of summarizing harmful effects already occurring worldwide as a result of global warming. 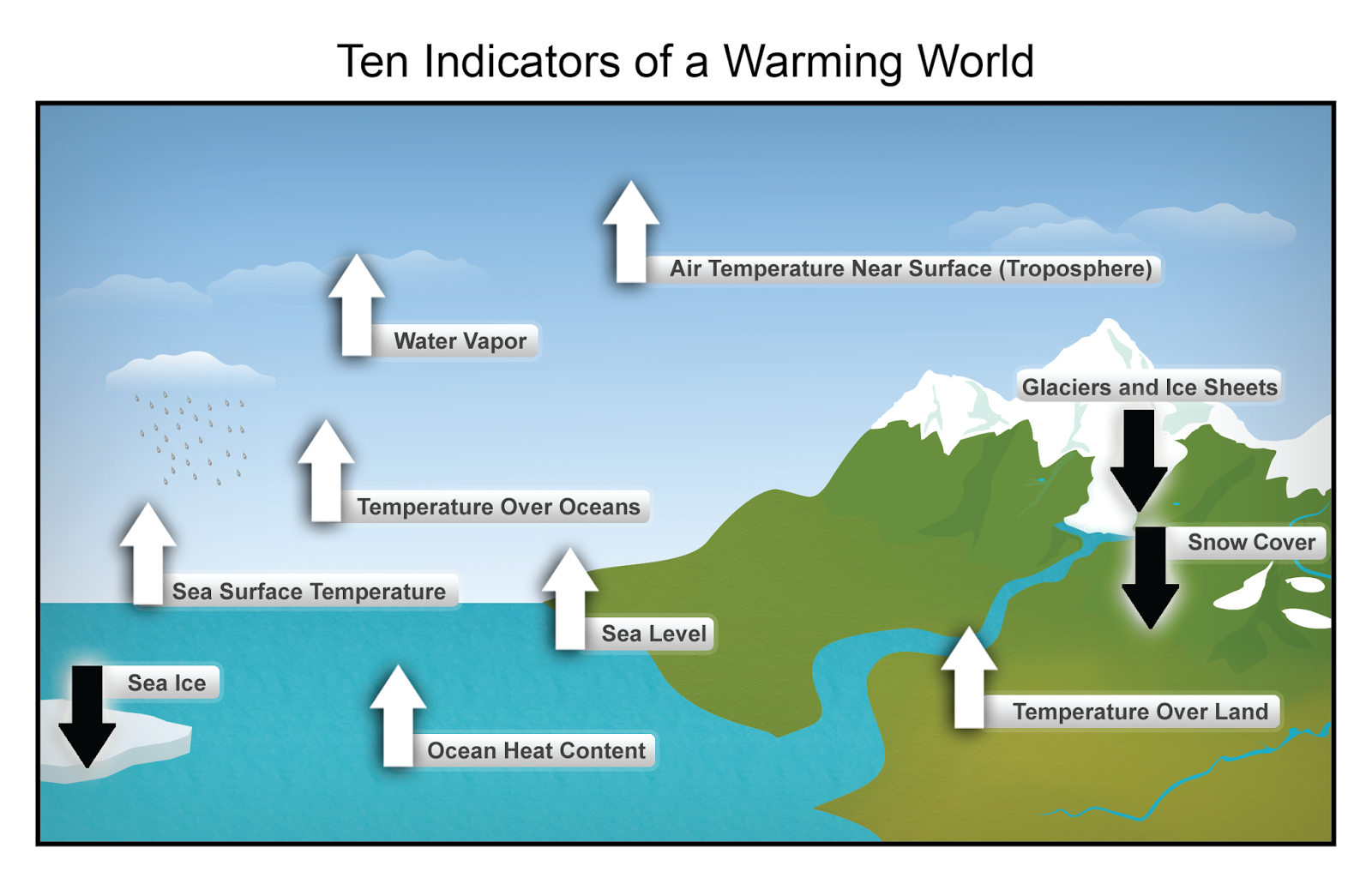 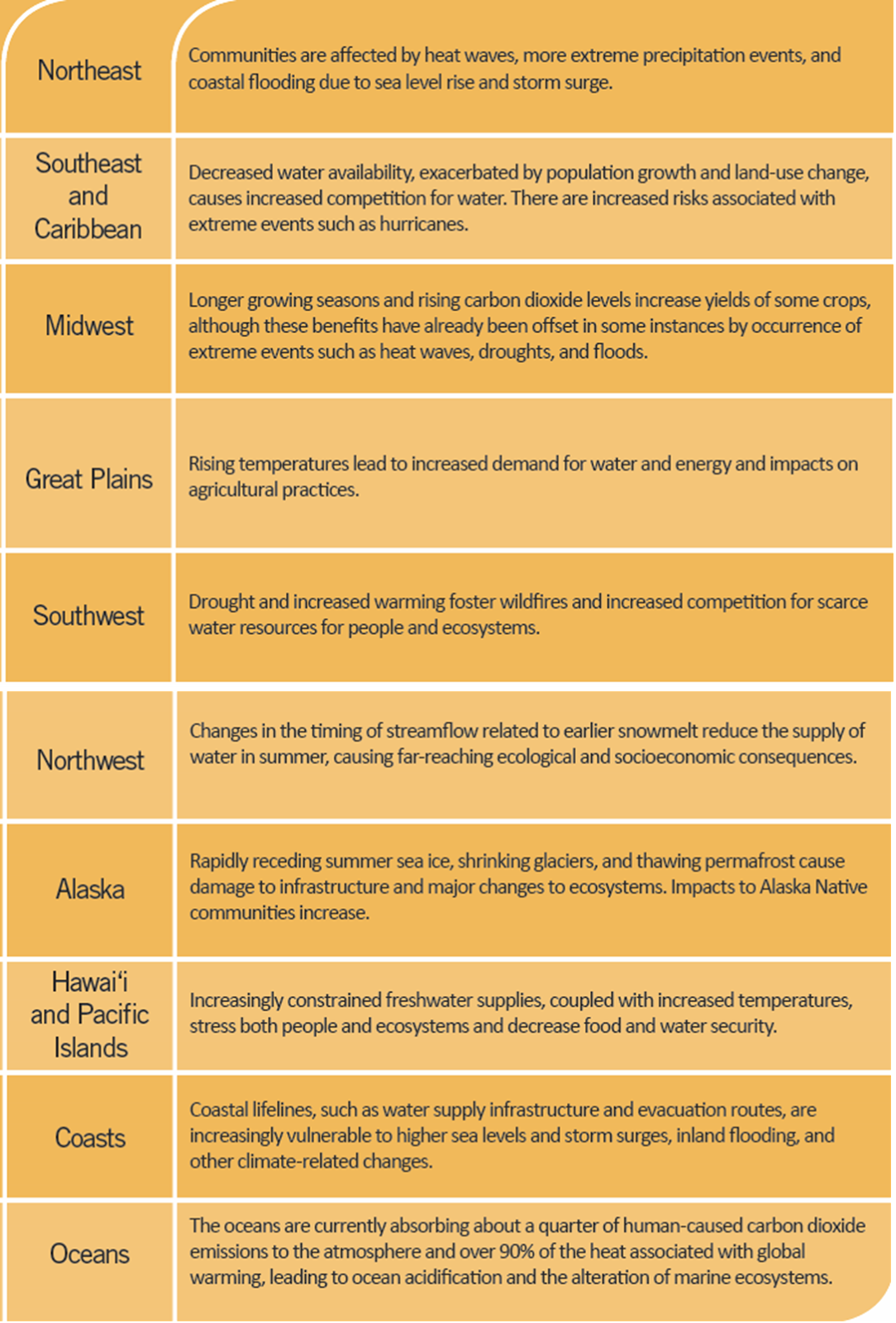 Posted by Henry Auer at 3:11 PM No comments: