CO2 and Temperature Changes Are Correlated for 800,000 Years

Summary.  Global warming and cooling cycles over geological time scales are correlated with increasing and decreasing concentrations of atmospheric carbon dioxide, respectively.  This post documents correlated changes occurring  a) during the recent post-industrial period of global warming, b) over the last one thousand years, and c) over the past 800,000 years.


Except for the industrial period, these changes reflect only global physical processes not involving actions by mankind, showing that the greenhouse effect is an established physical phenomenon.  Each geological warming or cooling trend, coupled with its change in carbon dioxide concentration, occurs very slowly, lasting thousands of years.  The current man-made warming trend, in contrast, is occurring at least 60 times faster, and its pace is accelerating.

Introduction. The previous post discussed variations over time in the atmospheric concentration of carbon dioxide (CO2), the major greenhouse gas.  Recent changes in CO2 concentration measured directly since 1958 were contrasted with a slightly broader record, extending back to 1700 CE, and finally with the geologic record of atmospheric CO2 cataloging concentrations as far back as 800,000 years before the present.


a)     geological changes in CO2 levels have practically never exceeded 280 ppm, the level that existed just before humanity embarked on the industrial revolution;


b)     on a time scale relevant to human experience and lifetimes geological changes in CO2 levels change extremely slowly, over periods of many thousands of years;


c)     physical properties of atmospheric CO2 today show unequivocally that the excess CO2 that has arisen in the past century comes from burning fossil fuels;


d)     virtually the entire increase in contemporary CO2 levels has resulted in concentrations so high that they have never been found in the geological record for 800,000 years;


e)     contemporary CO2 levels continue to increase unabated and at a rate 60 times or greater than in the geological record; and


f)      the rate of growth of contemporary CO2 levels is accelerating. 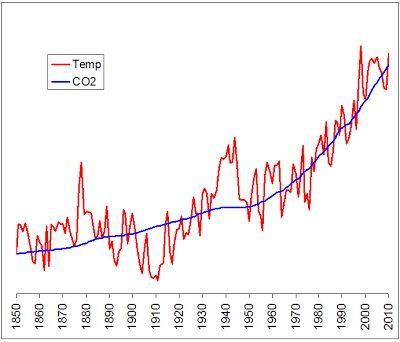 The graphic shows that the long-term global average temperature is closely correlated with the CO2 concentration.  (The temperature trend shows many spiky bounces because, in addition to the atmospheric concentration of CO2 and other greenhouse gases, the global temperature responds to other factors in the atmosphere, effects on land and especially effects occurring in the oceans.)


Climate science models show unequivocally that the temperature increase is caused by the additional CO2 accumulating in the atmosphere.


Thousand-Year Correlation.  The CO2-temperature correlation is even more striking when viewed for the time from the year 1000 CE to the present time, shown in the graphic below. 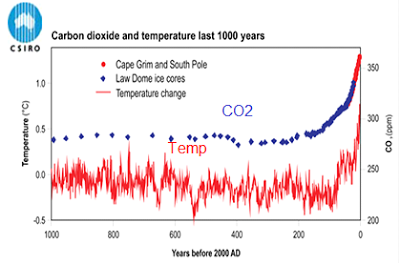 Correlation between CO2 concentration and global average temperature (including geological proxy data) for the period 1000-2000 CE.  For CO2 the blue points are from ice cores and the red points at the right are from direct atmospheric measurements.


It is seen that the trends for CO2 concentration and global average temperature follow each other extremely closely over the last 1000 years.  Both are largely unchanged over the period from 1000 to about 1800 CE, then both change in correlated fashion as industrialization began at about that time.  Industrialization depended on burning fossil fuels as a source of energy, a process which did not occur prior to its beginning.  The consequence of industrialization has been the correlated rise in CO2 and global average temperature seen in the two graphics above. 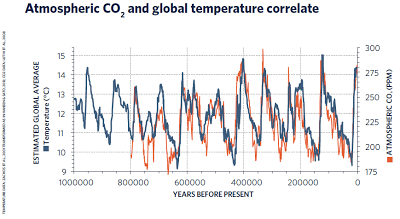 
The graphical presentation of the CO2 concentration above is the same as was shown in the previous post.  It is important to note that each small division on the horizontal axis represents a very long time, 50,000 years.  For example, the minima in both temperature and CO2 at the extreme right on the graph represent the last ice age.


The most important feature of the above graphic is that over the last 800,000 years, an extended time scale, the global average temperature and the atmospheric concentration of CO2 have been highly correlated.  Many of the changes appear abrupt on the compressed time scale shown above. However, in the previous post one example of a sharp change in CO2 concentration was expanded using the original data.  The expanded change for the instance selected, between 128,609 and 135,603 years ago, extends over 7,000 years, and cannot be considered abrupt on the scale that we as humans experience.  Over these 7,000 years the CO2 concentration increased very slowly indeed.


Over these millennia an “initial” increase in temperature, say, results in lowering the solubility of CO2 in the warmer waters of the oceans.  This releases more CO2 into the atmosphere, amplifying the warming process already under way due to the increased greenhouse effect.  Alternatively, an “initial” decrease in temperature, say, results in raising the solubility of CO2 in the cooler oceans, removing more CO2 from the atmosphere, thus amplifying the cooling process already under way due to the decreased greenhouse effect.  Likewise, an “initial” increase or decrease in CO2 concentration raises or lowers the global average temperature, which amplifies the further release of CO2 from, or increased absorption back into, the waters of the oceans.  These changes in atmospheric CO2 levels amplify the processes already under way.


1.On the time scale that we directly experience as humans, excess injection of CO2 into the atmosphere by burning fossil fuels is causing an increase in the long-term global average temperature.


2.During the last one thousand years the atmospheric CO2 concentration and the global average temperature have been tightly correlated.


3.Over geological time scales extending back 800,000 years from the present, the atmospheric CO2 concentration and the global average temperature are highly correlated.


4.For the period represented by industrialization these changes arise primarily because of the greenhouse effect due to mankind’s burning of fossil fuels for energy and creation of other greenhouse-active gases.  For geological time scales the close coupling between temperature and atmospheric CO2 concentration shows that the greenhouse effect has operated to affect the temperature of the planet for hundreds of thousands of years, although it occurs at a far slower rate than presently with industrialization.


The emission of CO2 since industrialization began has elevated the atmospheric CO2 to levels never seen during the preceding 800,000 years in the geological record.  This is occurring at a rate 60 times or more faster than changes have proceeded in geological cycles.  The pace of adding new CO2 is itself getting faster, as industrialization in developing countries requires burning more and more fossil fuels for energy.


Global warming is just that, a global problem; once emitted, CO2 becomes distributed in the atmosphere worldwide.  The harmful effects of global warming are widely known and becoming more apparent as time passes.  For this reason nations of the world must work to set aside differences in their perceived interests and reach agreement to limit worldwide emissions, as soon as possible.