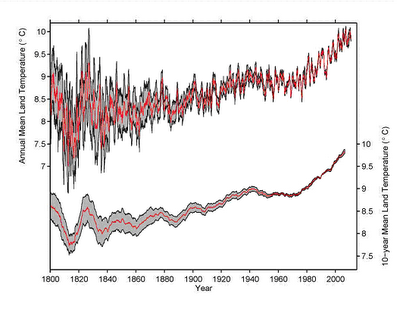 The following graphic shows the temperature differences, or “anomalies”, for all land areas of the planet, identified from the results of the BEST analysis, for two time intervals.  The color coded “anomalies” are based on the average temperatures in the earlier decade as the reference values. Warming is observed over all continents, with the greatest warming at high latitudes (northern regions of the map) and the least warming in southern .


The time dependence of temperature changes arrayed across the land surfaces of the earth on a projection of the globe, from 1800 to the present, are also presented by BEST in this video.
In a second paper, “Influence of Urban Heating on the Global Temperature Land Average Using Rural Sites Identified from MODIS Classifications”, Muller et al. compared temperature records from urban settings to those from a selection of rural weather stations.  Their results confirm earlier analyses by others that urban warming has no biasing effect on assessing the extent of recent increases in global temperature.
The third paper, “Earth Atmospheric Land Surface Temperature and Station Quality in the ”, assesses use of weather stations in the ranked by the National Oceanic and Atmospheric Administration to be “poor”, compared to those ranked “OK”.  The analysis finds no statistically significant difference in temperature trends between the two groups of stations.  This suggests that trends remain apparent even when individual stations have large uncertainties in their data.
The fourth paper, “Decadal Variations in the Global Atmospheric Land Temperatures”, examines correlations between variations, in the range of years to decades, in global average temperatures and pronounced ocean circulation trends.  In the past, many climate scientists have emphasized the role of the El Nino Southern Oscillation () in global climate patterns.  The analysis in this paper from BEST finds the strongest correlations not with , but with the Atlantic Multidecadal Oscillation.  In addition, this paper separately includes an analysis of data from 30,964 world-wide weather stations with data available from 1950.  This number is much greater than had been used in earlier studies (the National Oceanographic and Atmospheric Administration, NASA Goddard Institute for Space Science, and a collaboration of the Hadley Centre of the UK Meteorological Office with the Climate Research Unit of East Anglia).  The new analysis conforms well to the earlier results.
Conclusion.  Richard. A. Muller, a former skeptic concerning the validity of temperature trends that establish global warming, has conducted a rigorous analysis of all available land-based temperature records around the earth.  He and the BEST team developed new statistical methods to overcome several objections that he and others had raised earlier concerning historical temperature records.
Muller and the BEST team concluded that global warming is real.  This eliminates one argument that skeptics of global warming can use in denying the reality of the effect.
BEST did not at this time seek to evaluate whether the global warming they confirm is due to man-made effects.  The IPCC, however, has shown convincingly that man-made contributions to greenhouse gases in the atmosphere are required, in climate models, to reproduce the historical record of global changes in temperature.  The following graphic 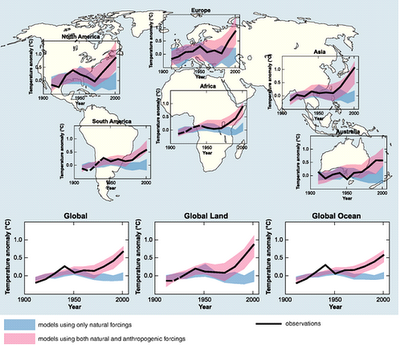 shows specific continental, overall global, global land, and global ocean temperature simulations from climate models, compared to actual observations (black line).  The pale blue simulations omit man-made contributions to global warming, such as emissions of greenhouse gases.  It is seen that in none of the regions or global cases do the pale blue simulations reproduce the temperature observations beyond about 1950, but do satisfactorily trace the temperature data before 1950, before emissions became significant.  The pink simulations include man-mad contributions to global warming.  These simulations satisfactorily trace the observed temperature record over the entire time period from 1910 to 2005.  It may be concluded from these comparative simulations that man-made emissions of greenhouse gases are highly likely to be responsible for the increase in global temperature since about 1950.

Posted by Henry Auer at 9:11 AM No comments:

Americans Are Losing Sight of Global Warming as an Important Issue