How Do We Answer Our Children?


On Friday March 15, 2019 children all over the world walked away from school and joined organized marches to raise their voices in favor of combatting global warming.


It’s estimated that around the world about one million marchers joined this protest, according to its organizers.  They gathered in over 1,600 cities in more than 100 countries.

This movement was started in 2018 by Greta Thunberg, a Swedish high school student, now 16 years old.  Her tweeted message from the March 15 protest is shown here: 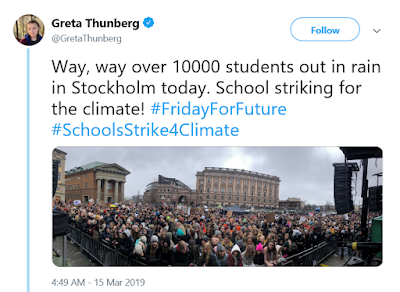 She told the gathered marchers in Sweden “We are facing the greatest existential crisis humanity has ever faced. And yet it has been ignored. You who have ignored it know who you are.”

In Africa, Isaac Oindo, from NGO Power Shift Africa, said:  “Some people think climate change is only a future problem but here in Africa we know that it is happening now. We're living through it. However we know that it is going to affect the next generation even more severely which is why it's no surprise to see school children here in Africa and around the world going on strike to demand action.”


In Berlin, Luis Anzolin, age 15, declared “We’re here because it’s important, it’s about our future. Because let’s face it, those sitting in Parliament will probably not be there in the future and it’s going to affect us.”


A 2018 Pew Research Poll conducted in 26 countries found that climate change is viewed as the main international threat in 13 of them.  Young people are more worried about the threats that climate change poses than are those over 50, in the U.S., France, Australia and the Philippines.


These youths, presently in their mid- to late-teen years, realize that within their lifetimes the world’s climate will wreak severe harm on our planet if humanity continues its present profligate energy habits. This was already foreseen in the United Nations’ 5th Assessment Report (5AR) issued 2013-2014 by the Intergovernmental Panel on Climate Change (IPCC).The report models the future climate expected under four scenarios of greenhouse gas (GHG) emission rates. It finds that for an unconstrained scenario by 2100 the long-term global average surface temperature could reach as high as about 4.6°C (8.3°F) above the average for the two-decade period from 1861-1880, as seen in the image below. 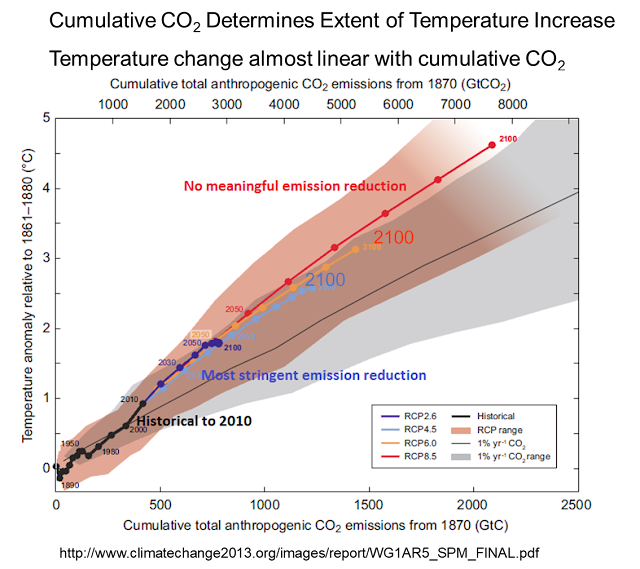 In this graphic the total accumulated amount of extra carbon dioxide (CO2) added to the atmosphere since the industrial revolution began, arising from burning fossil fuels, is given on the upper horizontal axis.  The resulting increase in long-term global average temperature, arising from modeling the four emission scenarios, is shown on the vertical axis, referenced to the 1861-1880 average.  The four scenarios range from most stringent (falling to zero emissions at about 2040) shown in dark blue, giving a temperature increase of about 1.8°C (3.2°F) by 2100; passing on through the progressively less stringent scenarios shown in light blue and orange; and ending on the scenario that continues present trends of largely unconstrained emissions (red) mentioned earlier.

The black line in the lower left represent actual historical data, with each decadal year given by a dot, some of which show the year.  It’s seen that this historical “hindcast” reproduces the historical data very well, giving credence that the modeling is correct.  The four successive emissions scenarios follow almost a straight line toward the upper right, toward higher CO2 levels and higher projected temperatures.

It’s already turning out that our children are right to be alarmed and frightened about their climate future.  In the five years since 5AR was issued, accumulated CO2 in the atmosphere has continued to increase year by year, as has the long-term global average temperature.  The world has been afflicted with ever more severe bouts of extreme weather and extreme climate, just as the climate scientists writing 5AR foresaw.  These include, in differing regions of the planet, drought and reduced agricultural yield, heat waves and long-term hot temperatures also reducing agricultural yield, more extreme precipitation resulting in fresh water floods, more severe storms, fair weather tidal flooding along shorelines, and ocean warming resulting in displaced fisheries.  The science of attribution has made great progress in recent years; events such as listed here in many cases are deemed to have been made more severe because of global warming.  Our perceived sense of worsening weather and climate events is real, and is due to worsening warming.
Climate scientists have been calling for policies to mitigate global warming and to adapt to its consequences since at least the First Assessment Report almost three decades ago.  Policymakers in many countries, but especially in the U. S., have ignored or even sought to suppress these findings.

We must answer our children now.  Scant time remains for those in power the world over to act meaningfully to mitigate worsening warming and to implement adaptation measures to address effects that are already underway.  Being human, our policymakers themselves have children and grandchildren, or may have them soon.  Their children, like ours, call out for meaningful action.  Doing nothing is no longer an option, since it consigns all those in future generations to lives of misery and hardship.

Our children are waiting for us to act.  Their future calls for nothing less than decarbonizing our energy economy as completely as feasible, using existing and newly invented technologies.
© 2019 Henry Auer

Posted by Henry Auer at 8:34 PM No comments: