Summary.  A conference on energy efficiency in public buildings was held recently in .  Energy efficiency retrofitting projects represent an accessible and achievable contribution to reducing the demand for energy used in heating, cooling and air conditioning.  Contrary to other public capital projects or infrastructure development, energy efficiency retrofits avoid the need for bond funding, since the savings from the energy not used provide a short payback period as well as a mechanism for alternative financing.  The savings can be as high as 25-30% per year, once a project is completed.
Introduction.  A conference entitled “Leading by Example: Creating Jobs & Reducing Costs through Energy Efficiency in Public Buildings Across Connecticut” was convened on , sponsored by the Emily Hall Tremaine Foundation of .
The rationales for holding the conference included
·        Recognition of the fact that no national energy policy has been enacted in the , so that a single, nation-wide framework of policy and practices is absent;
·        Understanding of the importance of reducing the dependence of the U. S. on foreign sources of fossil fuels; such fuels are major sources for heating and electricity generation whose consumption can be abated by implementing energy efficiency; and
·        Realizing that in a time of economic hardship, it is important and advantageous to undertake projects such as improving the energy efficiency of public buildings as a way to create new jobs among a group of workers severely affected by unemployment.
Background.  The American state of contains 169 municipalities.  Across the state, about one-fifth of the building stock houses government functions involving state or municipal jurisdictions.  This represents a significant portion of the total space heating and cooling demand found in the state.  Clearly, other states, indeed governmental bodies in most other countries in the world, have similar numbers of buildings in their jurisdictions that house the offices for carrying out their governing duties.  Thus it is clear that efficiencies created in public buildings will have a significant impact on the energy economy of the jurisdiction.
Energy Efficiency: Retrofitting of Existing Buildings.  Existing public buildings span a wide range of ages, and incorporate a broad range of construction practices reflecting many “generations” of building codes.  An estimate was cited in the day’s presentations that, according to the consulting firm McKinsey and Co., about $550 billion worth of energy renovation work on public buildings can be found in the U. S.  Generally, it is understood that significant savings in energy usage can be realized as soon as a retrofitting project is finished, resulting in short payback periods for recovering the costs of the project.
The Role of Energy Service Companies in Retrofit Projects.  Energy service companies (ESCOs) encompass those that engage in installing insulation; renovating windows; updating heating, ventilation and air conditioning (HVAC); updating lighting with low-energy devices, energy management systems, and more.  According to the National Association of Energy Service Companies (NAESCO), savings obtainable from energy efficiency projects (see the following chart)

Schematic diagram of savings envisioned for energy efficiency projects.
Source: NAESCO.  Reproduced with permission.
are considerable and immediate, leading to recovery of the costs invested in undertaking the projects in relatively short time periods.  After the payback period, the savings accrue indefinitely.  The ESCO industry’s history can be summarized as follows:
l      $40 billion in projects since 1990;
l      Growth by 12-fold over 1990-2007, for an annualized growth rate of 16%;
l      $50 billion savings – guaranteed and verified (see below);
l      330,000 person-years of direct employment;
l      $25 billion of  infrastructure improvements; and
l      420 million tons of CO2 savings at no additional cost.
According to NAESCO, the background and opportunities in the state of include:
l      $200 million in state energy expenditures;
l      More than $200 million in local government energy expenditures;
l      30-35% savings feasible (US EPA);
l      Corroborated by ISE studies of CT buildings; and
l      More than $120 million in savings are available
(where the dollar amounts are presumed to be annual amounts).
Using a compounded-cost savings calculator available on the internet through the U. S. Environmental Protection Agency’s Energy Star program, NAESCO estimated that, for an annual savings of $100 million, with a duration of 15 years and an assumed interest rate of 4.5%, 90% of the total accumulated savings is almost $1 billion.  These savings are guaranteed and verified (see below).  Over this time it is estimated that CO2 emissions are reduced by 10.5 million tons, again involving no net investment of public funds (see below).  Among other purposes, this amount could be reinvested in further energy efficiency, carbon emissions reductions, or other infrastructure projects without increasing the capital and operating budgets at the time of the original efficiency project.  Such projects produce 9,500 new jobs directly involved in the work, and an additional estimated 11,400 jobs indirectly stimulated.
Financing Energy Efficiency Projects: an Alternate Paradigm.  Typically a government entity intending to undertake a capital or infrastructure project must obtain bonding authority from the jurisdiction involved, creating an obligation by the entity to pay the interest and principal to maturity of the bonds.  Energy efficiency projects provided by ESCOs offer a second, highly advantageous funding mechanism that avoids the need for issuing bonds.
ESCOs commonly offer to work on a project under an Energy Service Performance Contract (ESPC).  There are two models for ESPCs, in both of which the ESCO undertaking the project participates directly in the funding and guarantees that the completed project will afford the savings stream envisioned at the outset.  In one, Guaranteed Savings Financing (see the diagram below) a lender and the ESCO 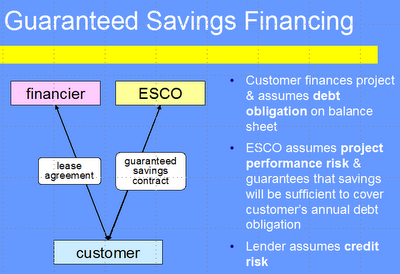 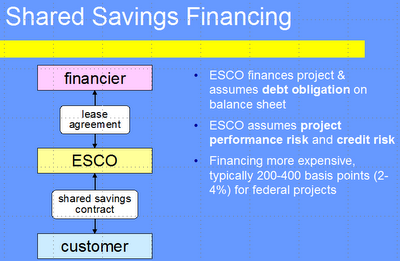 Source: NAESCO.  Reproduced with permission.
and the project is undertaken under a lease arrangement rather than an ownership arrangement.  Shared savings financing is more expensive due to the higher risks incorporated in the financial structure.
“Leading by Example”.  The title of the conference, “Leading by Example”, reflects the fact that in the , there is no integrated policy of energy objectives and practices that address global warming.  Three regional greenhouse gas accords have been set up involving many American states and Canadian provinces: the Western Climate Initiative, the Midwest Greenhouse Gas Reduction Accord, and the New England and mid-Atlantic Regional Greenhouse Gas Initiative.  These programs have varying levels of coverage and differing terms duration.  Actual implementation requires that each participating state or province pass its own legislation in order to put the terms of the agreement in force.  These factors obviously render compliance complicated and regionally inconsistent.  Commercial and industrial activity is impeded by not having a single national policy covering the countries in question.
In the face of this situation, there is widespread recognition that improving energy efficiency offers an inexpensive and achievable way to begin efforts at mitigating the emission rate of greenhouse gases that produce global warming.  For example, the European Union’s Energy Roadmap for 2050 places considerable emphasis on energy efficiency as a component in achieving the Roadmap’s objectives.  The conference reviewed here is a state-level approach to accomplishing energy efficiency, and has the support of the governor of .  In passing let us note that on May 26, 2011, Governor Chris Christie of New Jersey also promoted energy efficiency as one component of achieving reductions in greenhouse gas emissions, even as he announced withdrawing his state from participation in the 10-state Regional Greenhouse Gas Initiative.
Conclusion.  Energy efficiency retrofits in public buildings represent a feasible and achievable contribution to our efforts at reducing emissions of CO2 as a greenhouse gas.  The technology is available and does not require the development of new practices or devices.  The financial advantages are considerable, since significant savings are available, and they can be considered to accumulate with compound interest to provide additional assets for further climate mitigation projects.  The economic advantages are considerable, for new jobs are created that can be filled without requiring new training or skill development.  Efficiency projects in public buildings should be undertaken with existing policies.  They will additionally provide incentives to extend efficiency projects into the commercial and residential realms.
© 2011 Henry Auer
Posted by Henry Auer at 4:14 PM