International Energy Outlook 2011: A Report by the U. S. Energy Information Agency 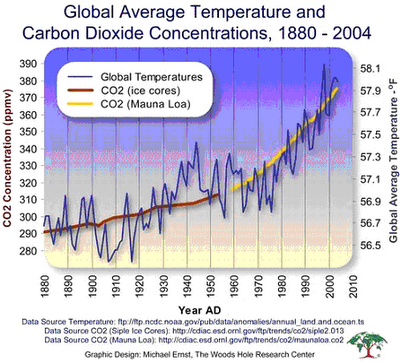 Superposition of global long-term average temperatures (jagged blue line), CO2 measured from air bubbles isolated from frozen ice cores (red line), and CO2 measured directly in the air at the high-altitude station on (yellow line).
Data sources: Temperature: ftp://ftp.ncdc.noaa.gov/pub/data/anomalies/annual_land.and.ocean.ts
Ice core CO2: http://cdiac.esd.ornl.gov/ftp/trends/co2/siple2.013
Mauna Loa CO2: http://cdiac.esd.ornl.gov.ftp/trends/co2/maunaloa.co2
increase arises because of the increased atmospheric concentration of CO2.  The continued release of CO2 in future decades, and the fact that the amounts added to the atmosphere each year will add to the CO2 already present from previous years, indicate that very high atmospheric concentrations of CO2 will accumulate by 2035 in the Reference case.  These concentrations will make global warming much worse, and lead to significant adverse effects on weather patterns, food supplies, and human wellbeing.  Recent posts on this blog have detailed the significant economic and societal damages arising from global warming in recent years.
The graphic above illustrates the accumulation of excess CO2 in the atmosphere with each passing year.  This is because the CO2 remaining in the atmosphere (after processes such as absorption into the ocean have had their effect) has nowhere else to go.  It is estimated that the lifetime of CO2 added to the atmosphere is at least 100 years.  Thus the only way to prevent the CO2 in the atmosphere from increasing is to cease burning fossil fuels as soon as technically possible.
Imagine that the atmosphere is like a bathtub containing CO2.  The faucet adds more CO2 to the bathtub as we burn fossil fuels, but the drain is essentially closed (after absorption of CO2 by the ocean).  CO2 accumulates in the bathtub and fills it higher and higher as long as the CO2 faucet keeps running.  The CO2 level in the bathtub is stabilized (but not lowered) only if the faucet is turned off.  It is not sufficient merely to decrease the rate of adding CO2 to our atmospheric bathtub; that only slows the rise of the CO2 level.
IEO 2011 describes significant expansions in use of fossil fuels; these necessarily rely on new and existing physical facilities that utilize them.  Typically these facilities have long service lifetimes; they include new homes and offices, new cars and trucks, and new fossil fuel-burning electric plants.  Once put in service, these facilities necessarily will continue burning the fossil fuels they were designed to use, and will continue emitting CO2, for decades, until removed from service.  Davis and coworkers showed that even if no new facilities for using fossil fuels were built starting “today”, those already in place would contribute to adding more CO2 to the atmosphere, worsening global warming as a result.
The Kyoto Protocol negotiated under the United Nations Framework Convention on Climate Change set forth emission reduction goals for its signatory states.  Unfortunately, today’s major emitters of CO2, the , and , do not participate in .  Furthermore, extends only to 2012 and requires extension and agreement by the world’s nations.
has acted in the past to expand its energy supply largely by means of fossil fuel-driven energy.  Its 12th Five Year Plan continues this trend, signaling the building of many new coal-fired electric generation plants.  Its policy is rather to increase its energy efficiency by lowering its energy intensity, i.e., the amount of energy needed to produce a unit of economic product or service.  This goal does not directly address absolute reductions of CO2 emissions which, in fact, continue to grow.
The does not have an energy policy in place at the national level.  Several states have joined one of three regional greenhouse gas accords.  These have set out goals for reducing greenhouse gas emissions of varying degrees of stringency.  The state of , while subscribing to one of these accords, is also proceeding with its own stringent emission reduction program.
The European Union has set in place an ambitious program to reduce emissions by at least 80% by 2050.
IEO 2011 made its projections using a Reference case in which it was assumed that no emission reduction programs would be put in place after 2011.  The increasing rates of use of fossil fuels, and the increasing emissions of CO2 resulting from these activities, clearly will worsen the effects of global warming in coming decades.  In order to minimize these effects, the nations of the world, corporations acting independently of government programs, and individual citizens should come together to implement meaningful emissions reduction programs as soon as possible.
Details 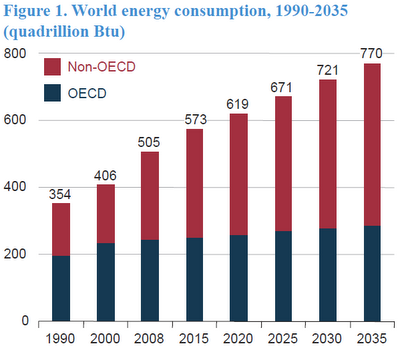 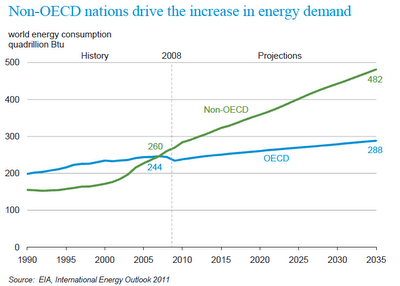 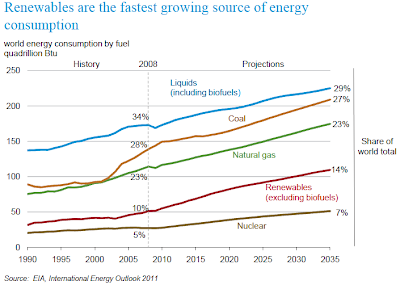 Annual consumption of energy provided by various sources of fuel or energy.
Source: U. S. EIA International Energy Outlook 2011 Presentation
http://www.eia.gov/pressroom/presentations/howard_09192011.pdf
Liquids include petroleum and unconventional fuel liquids originating from oil sands and bitumen, and biofuels.  Production of each of these two categories increases from about 1.5 million barrels per day in 2008 to an estimate of about 4.8 million barrels per day in 2035.  Production of oil sands and bitumen occurs primarily in , .
Figure 4. 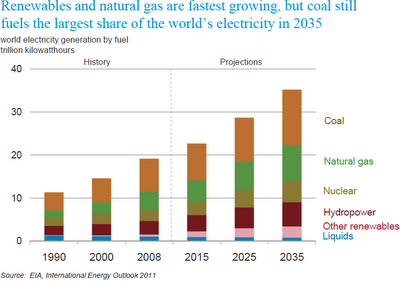 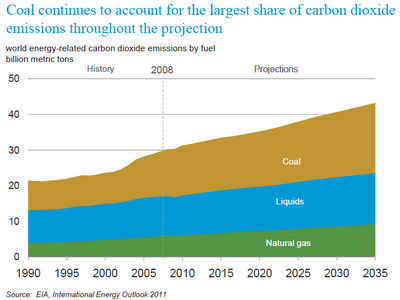