Summary.  The scientific method dictates that research be carried out in an open, unbiased way.  Desired results may not be determined ahead of time.  Peer review by anonymous reviewers ensures that published reports are objectively presented and that their conclusions are supported by the data.
This post presents six examples of important scientific and technological advances that have improved human life over the past 150 years, and two examples in which useful technologies carried with them unintended, harmful side effects.  Scientific research helped identify the causes of the harms, and provided ways to overcome them.
Recognition of global warming did not occur by predetermining this result and seeking data to support the concept.  Rather it was characterized by open scientific inquiry conducted by myriad scientists around the globe for the last several decades.  Global warming and its harms to human life and to the ecology of the earth are unintended consequences of our use of fossil fuels.  Those who disparage the notion of man-made global warming must be consistent in their acceptance or rejection of the results of scientific inquiry.  They cannot pick and choose which science to accept and which to reject.  Consistency would require them not to accept the benefits that modern science and technology confers on them.

In the northeastern dying wilderness lakes and forests were noticed beginning around the 1970’s.  Research sanctioned by an act of the U. S. Congress established that acidity in lakes due to excess sulfates was characterized.  This most likely arises from sulfur impurities in coal burned to generate electricity in the American Midwest, upwind from the damaged areas, which produces the chemical predecessors of sulfurous and sulfuric acids (sulfur oxides).  These then drift eastward in the air and fall to earth as both dry particulates and dissolved in raindrops which are made acidic by the sulfur oxides.  A forest killed by acid rain is shown below. 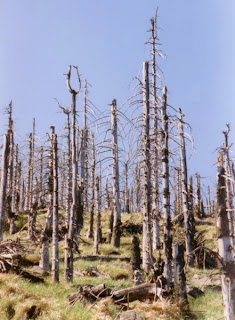 Source: Wikipedia http://en.wikipedia.org/wiki/File:Waldschaeden_Erzgebirge_3.jpg; (accessed ). Permission for copying granted under the GNU Free Documentation License.
In response the Congress amended the Clean Air Act in 1990, setting up a cap and trade market for progressively reducing emissions of sulfur on site at coal-burning plants.  Technology for achieving this required power plants to install sulfur oxide scrubbers in the waste gas stream from the plants.  They could also switch to low-sulfur coal from the American West. Since these solutions involved new and unanticipated capital investment or other expenses, electric power companies opposed this law, unsuccessfully.  By 2007 acid rain levels had fallen by 65%, at a cost estimated at US$1-2 billion.  International treaties governing cross-border flow of acidic waste products have also been implemented.
Ozone depletion (see Wikipedia; accessed ).  Ozone is a molecule made of 3 oxygen atoms.  It forms in the stratosphere (10-50 km; 6-31 mi above the earth) by the action of sunlight on molecular dioxygen (dioxygen (popularly called simply “oxygen”); 2 oxygen atoms).  Ozone is important for life on earth because, contrary to dioxygen, ozone absorbs the ultraviolet wavelengths of sunlight that can promote skin cancer and ocular cataracts.
Chlorofluorocarbons (CFCs) are entirely manmade compounds that did not exist prior to modern industrial chemistry.  They have been used as the coolant in refrigerators and air conditioners, in aerosol spray cans, and in industrial cleaning and dusting processes.  When released into earth’s atmosphere, they can make their way as high as the stratosphere.
Depletion of ozone from the stratosphere has been observed using weather balloons and satellite observations starting in the 1980’s, especially in the spring of the southern hemisphere over .  The largest Antarctic hole observed, from , is shown in the graphic below. 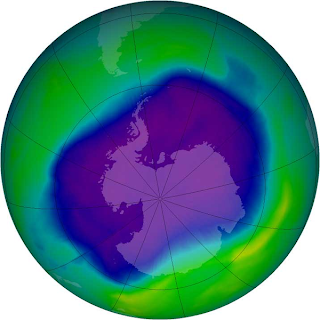 Antarctic ozone hole from covering10.6 million square miles (27.5 million square kilometers).  The blue and purple colors show areas with the least ozone, and the greens, yellows, and reds are where there is more ozone.
Source: National Aeronautics and Space Agency (accessed ) http://www.nasa.gov/vision/earth/lookingatearth/ozone_record.html .
Atmospheric scientists were able to model the destruction of ozone in the stratosphere using specialized instruments and reproduce the process in laboratory experiments on earth.  They showed that ozone depletion is catalyzed by CFCs that wind up in the stratosphere. (In catalysis, a molecule participates in promoting a chemical reaction such as the transformation of ozone to dioxygen, but is itself regenerated and can be recycled to participate in many such transformations, not just one.  For this reason a small amount of a CFC can contribute to significant extents of ozone depletion.)  In this way basic scientific research conducted by academic and government scientists contributed directly to understanding the basis for ozone depletion.  For successfully working out the details of the role of chlorofluorocarbons in ozone depletion, Paul Crutzen, Mario Molina, and Frank Rowland were awarded the Nobel Prize in 1995.  As the evidence of involvement of CFCs was accumulating, the manufacturers of these compounds and of aerosol spray cans were vilifying the theory (Wikipedia), without offering any scientific evidence to support their position.
In the face of this new understanding that CFCs were responsible for a major part of ozone depletion, nations producing these compounds agreed, in the Montreal Protocol of 1987 as strengthened in subsequent years, to phase these compounds out essentially completely by 1996.  Recovery of stratospheric ozone concentrations to original levels will take many decades.
Conclusion.
The examples presented here are but a minimal selection of the ways in which science, encompassing both basic research and applied research, and technology, including developing ways to implement basic scientific knowledge in practical ways, benefit humans as we live in the 21st century.  Scientific research and development of technology cannot be pre-ordained by the preferences and desires of the researchers and entrepreneurs creating the products.  Rather, the facts resulting from these research projects are the only determinants of the paths of progress.  When unanticipated harms to the environment arose from using products, as in the cases of acid rain and ozone depletion, unbiased scientific research was critical in establishing the basis of the phenomena, and in suggesting ways to overcome the damages.
The same processes of scientific inquiry that led to the results summarized in the preceding sections have been applied for the past several decades to characterize the warming of the globe.  Climate science has ascribed the cause of warming to man-made emissions of greenhouse gases such as carbon dioxide that arise from burning fossil fuels.  This outcome was not obtained by predetermining the result and seeking data to support it, but rather as the result of thousands of independent, open inquiries conducted by scientists all around the globe. Clearly, global warming is an unanticipated harmful consequence of our use of fossil fuels as our energy source.
The Intergovernmental Panel on Climate Change (IPCC) issued its Fourth Assessment Report in 2007.  The draft of its Synthesis Report (IPCC, 2007: Climate Change 2007: Synthesis Report. Contribution of Working Groups I, II and to the Fourth Assessment Report of the Intergovernmental Panel on Climate Change [Core Writing Team, Pachauri, R.K. and Reisinger, A. (eds.)]. IPCC, accessed ), was sent for formal review to over 2,400 individual experts as well as to the 193 member governments of the IPCC, attesting to its validity and acceptance by the broad climate science community.
The Synthesis Report states “Eleven of the last twelve years (1995-2006) rank among the twelve warmest years in the instrumental record of global surface temperature (since 1850)…. It is very likely that over the past 50 years cold days, cold nights and frosts have become less frequent over most land areas, and hot days and hot nights have become more frequent.” (emphasis in original). The Report finds that observed rises in sea level and decreases in snow and ice extent are consistent with this warming trend.
There are those who dismiss, disparage or deny the scientific validity of man-made global warming and its consequences.  Nevertheless, these same individuals continue to live their lives in the present 21st century, enjoying all the benefits from science and technology that make our lives convenient, pleasurable and healthy.  In order to be consistent, however, one cannot enjoy the advantages of our present lifestyle, on the one hand, yet on the other hand selectively choose to disregard the overwhelming scientific evidence supporting the phenomenon of global warming.  If those who choose to denigrate global warming are to be consistent with their views on the results of scientific inquiry, they should likewise renege on their lifestyle and give up the comforts and benefits that contemporary life brings them.  Their integrity should lead them to accept nothing less.
© 2011 Henry Auer
Posted by Henry Auer at 9:48 PM