New Analysis Does Not Support a Warming “Hiatus”

The “Hiatus”.  Annual results for the global average temperature show a break from an earlier high rate of increase, beginning about 1998.  Compared with the preceding three decades, recently recorded global average temperatures have shown only a slight increase.  The reduction in the rate of warming of the globe may be termed a pause, and is generally referred to as a "hiatus".  This difference in warming trends was noted in the Fifth Assessment Report (AR5; Summary for Policymakers and Working Group I: The Physical Science Basis Ch. 2, Observations) of the Intergovernmental Panel on Climate Change (IPCC).  This break has been seized upon by those doubting or denying the reality of global warming as evidence that warming has effectively ceased since about 1998.

A new analysis of global temperature data extending from 1880 to the present was published by Thomas Karl and coworkers, from the National Oceanographic and Atmospheric Administration, the for Environmental Information, and LMI (), on .  Climate scientists recognized problems in the ways temperature data have been collected.  Karl and coworkers sought to reevaluate historical data to account for these problems (see Details section at the end of this post).  The scientists conclude “based on our new analysis, the IPCC’s … statement of two years ago – that the global surface temperature ‘has shown a much smaller increasing linear trend over the past 15 years than over the past 30 to 60 years’ – is no longer valid.”  Rather, the rate of warming of the world's atmosphere during 1998 to 2014, averaged over its entire surface, has continued unabated compared to the warming experienced in earlier decades (see Details).


Warming Skeptics.  Almost immediately upon the publication of this report organizations known to be skeptical about global warming, or to deny that it is occurring and/or that humanity is causing it, issued statements questioning the validity of the report.  However it is essentially impossible for these groups to draw such conclusions without actually taking the time to review the data and methods used in the reanalysis.  After all, the authors devoted many months or more to analyze the information available.  The data sets themselves are available to the public, and the report sets out in detail how the analysis was done.  Detractors can only question the validity of the conclusions reached by Karl and coworkers after critically reviewing this information and objectively pointing to any perceived faults in the analysis.  Anything short of such assessment is mere speculation.


Ocean Heat Content.  The reanalysis conducted by Karl and coworkers importantly shows that air temperatures averaged over the surface of the entire globe have continued to increase without any pause from about 1950 to the present.  In addition, the oceans absorb about 90% of the excess heat accumulated by the complete earth system.  Measurements collected over the past decades show that the heat content contained in the oceans has continued increasing without cease during this period.


Melting of Glacial Ice.  The excess heat added to the earth system, both air-based and ocean-based, has resulted in increased rates of loss of land-based ice in both the and in recent years.  This is but one example of the effects of global warming on the Earth.  Ice masses will suffer net melting  if the temperature, averaged over the full year, is higher than the melting point and the water lost to melting is not replaced by new precipitation frozen into place.
New reports published in April and May 2015 exemplify this.  Whereas melting of the Antarctic ice shelves was very low between 1994 and 2003, the rate of loss increased more than 12-fold over 2003-2012, especially in .  Loss of ice mass from glaciers in the Southern Antarctic Peninsula that end in ocean-floating ice shelves has rapidly increased from near none in the 2000s to high rates since 2009.  Adding this ice or its melted equivalent as liquid water to the oceans contributes significantly to rising sea levels around the world.  It is important that both these reports describe increased melting only in the recent years that coincide with the continued increase in global temperatures characterized by Karl and coworkers.


Since warming will continue for decades to come, land-based ice at the poles and in mountain glaciers will continue melting, indeed will do so at increasing rates.  So sea level will continue rising into the indefinite future.  This threatens coastal regions around the world, including many of the world’s cities.  Defensive measures needed to avert the damage wrought by flooding and ocean storm surges will require large investments of money, derived from public sources.

Global agreement is needed.  This post reports that global warming has continued unabated for at least the last fifty years, raising average temperatures of the atmosphere and the ocean.  Since this is truly a global problem it is necessary that all the nations of the world come together to implement meaningful reductions in annual rates of emission of greenhouse gases.  The United Nations-sponsored negotiations involving all nations of the world are under way now, with the goal of reaching agreement on the way forward at a meeting to be held at the end of 2015.  The harms from global warming already underway will only grow worse by 2100 and beyond if an agreement is not reached.  All nations need to agree on limiting emissions, with the goal of transitioning to a decarbonized energy economy by about 2050.  Major efforts by all nations will be needed to reach this goal.

Karl and coworkers examined three sources by which temperature averages could have provided erroneous results in AR5.  An important feature of this reassessment is the use of new data sets for temperatures that were not available when AR5 was prepared.  First, by far the largest number of observation stations in the world is land-based.  But over the last one and one-half centuries their number has grown, and the physical settings of older stations have changed.  Karl and coworkers reassessed land-based measurements accordingly, including incorporating new data sets not previously used.  This process roughly doubled the number of reporting stations.  An important feature of this improvement is far more authoritative reporting from the , which has in fact undergone a high extent of warming that was not fully accounted for in AR5.


Additionally, the ways of gathering sea surface temperature have changed.  A second factor recognized that historically these data were obtained primarily by ocean-going vessels.  Their numbers likewise have grown, but more importantly, the way in which they routinely measured ocean temperature has changed.  A third factor has been that, over the last 15-20 years, buoys have been deployed across the ocean, one of whose capabilities is real time measurement of air temperature.  Karl and coworkers harmonized the old and new ship-based measurements, and applied a correction to all those values to make them consistent with the buoy-based observations.

The earlier data, such as those presented in AR5 as given by Karl and coworkers in their Supplementary Materials appendix, show a reduction in the rate of increase in global average temperature between 1950-1999 and the interval 1998-2012, from 0.101 ± 0.026 ºC/decade, to 0.039 ± 0.082 ºC/decade.  It is important to note, as climate scientists have recognized, that the single temperature value recorded for 1998 was exceptionally high (see second graphic below) because it was affected by an unusually intense El Nino event.  This has the effect of artificially elevating the starting point for the 1998-2012 data range, thus lowering the steepness of the trend line for this period.

The reevaluation of Karl and coworkers shows that these two temperature rates are now very similar, namely 0.113 ± 0.027 ºC/decade and 0.086 ± 0.075 ºC/decade, respectively.  Thus their reevaluation shows that for the recent interval thought to experience the “hiatus”, the rate of increase of global temperature is more than double than that found earlier in AR5.


When temperature data extending to the most recent period, up to 2014, are considered, the rate of increase in temperature, instead of decreasing from 1950-1999 to 2000-2014 as AR5 shows up to 2012, actually increases slightly between these two time periods.  This is illustrated in the following graphic: 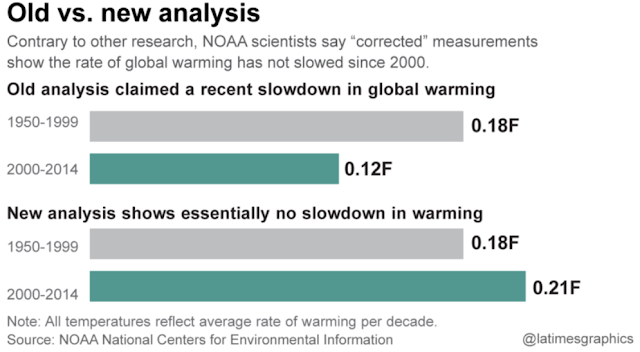 Comparison of the warming trends in ºF/decade for the old analysis (methods as used in AR5) but including data up to 2014, and the new analysis (data and methods used by Karl and coworkers).
Source: Times based on the report by Karl and coworkers;
http://www.latimes.com/science/sciencenow/la-sci-sn-no-global-warming-hiatus-noaa-20150603-story.html#page=1&lightbox=83703423
The near identity of temperature change rates before and after 1998 is seen in the following graphic showing annual temperatures from 1880 to 2014, with a single statistics-derived line drawn based on analysis of data from 1950 to 2014. 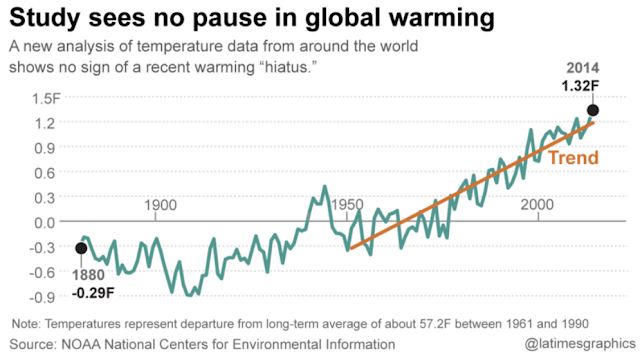 Global average temperature difference in ºF from 1880 to 2014, with the orange Trend line evaluated by Karl and coworkers.  The base line representing 0ºF is the average temperature over 1961 to 1990.
Source: Times based on the report by Karl and coworkers;
http://www.latimes.com/science/sciencenow/la-sci-sn-no-global-warming-hiatus-noaa-20150603-story.html#page=1&lightbox=83703423
These two graphics make clear that there has been no “hiatus” in warming after 1998.
© 2015 Henry Auer