Summary.  This is the first of two posts concerning the relationship between global warming and extremes of rainfall.  The second post, immediately following this one, presents summaries of two research articles and a commentary on them, that for the first time attribute extreme rainfall and an instance of severe flooding directly to human-induced global warming due to greenhouse gas emissions.

Here a simplified discussion of the transformations between ice, water, and water vapor is presented, as a tutorial.  First, these changes are considered in closed containers which are surrounded by air at various temperatures.  The interchange of heat energy needed to bring about the changes in state of the water is emphasized.  Next, in order more closely to resemble water vapor in the atmosphere, the water-to-vapor transformation is discussed without a container separating the water from the air, but rather mixed together.  Again, the energy interchange is stressed.  Finally, we discuss very simply how these transformations might be involved in creating rainfall, and winds or larger patterns of weather.
Introduction. In the physical world, a substance can exist either as a solid (at low temperature), a liquid (at a higher temperature) or a gas or vapor (at a still higher temperature).  An example familiar to us all is water.
Solid-Liquid-Vapor Phase Changes. Here, to start with (please see Note 1) let’s talk only about pure water, so we’re not including mixtures or solutions of water or its vapor with other substances.  Why is solid water, ice, found at low temperatures, liquid water at intermediate temperatures and the gaseous form, water vapor, at the highest temperatures?  There are two aspects to an answer.
Heat Energy. First, think about the ice itself, or the liquid water in a closed container or the water vapor in a closed container, surrounded by air for example. There is less heat contained in the air when its temperature is low, and more heat contained in it when its temperature is high.  Heat is one form of energy.  The air can transfer some of its heat energy to the ice or to the water or vapor through the containers, or in reverse the ice or water or vapor can transfer some of its heat energy to the air surrounding it.  (Heat can only flow from a warmer to a colder temperature.)
Intrinsic Energy. Second, the physical states of solid, liquid and gas themselves contain differing amounts of intrinsic, or latent, energy.  The ice contains the least, the water more, and the water vapor the most (see the graphic below).

Liquid Water-Vapor Interconversion. The same processes occur when liquid water is vaporized to a gas.  The molecules in the liquid water still have some bonds between the molecules, but not as many as there were in the ice.  The molecules in the water vapor have essentially no bonds between them, i.e., they are isolated.  In order to convert from liquid water to the pure water vapor inside the container, more heat energy has to be provided from the surrounding air to break the remaining bonds between the molecules in the liquid, and permit them to escape from the liquid as independent molecules of water vapor (right, upper arrow).  (For simplicity, the graphic ignores the fact that the vapor and its container are much larger than the liquid.)  Thus the water vapor inside the container has still more intrinsic, or latent, heat than the liquid water. This process is also reversible.   If the air were to cool down enough, the water molecules in the vapor would release their intrinsic heat to the surrounding air, condensing back into the liquid (right, lower arrow).
Transfer of heat energy. It’s crucial to understand from this explanation that the more important process is the transfer of heat energy between the surroundings and the substance.  As people, we can see the change from ice to liquid water, and from liquid water to vapor, and back.  But we don’t see the energy driving these visible changes.  It’s actually the transfer of the heat energy that’s important, even if we can’t see it.
When we put an ice cube into a drink, the liquid of the drink transfers its heat to the ice, supplying the intrinsic heat needed to melt the ice.  But as a result, the liquid drink has less heat energy remaining, i.e., it has cooled down.  We observe the melting ice cube, and the cooling of the drink.  But we don’t directly sense the heat transfer.
A Model: Compressed Gas and Gravity.  It might be helpful to think of the following idealized setup as a model.  Suppose a marble is at the bottom of a sloping ramp between two horizontal platforms (see the graphic below, left).  A cylinder and piston contain a gas under high pressure, and the piston rod extends out of the cylinder, with a cup that can push the marble up the ramp from the low platform to the higher platform.  Here, the low platform is a model for our solid, ice, and the higher platform is a model for our liquid, water.  If the gas in the cylinder is allowed to expand, the piston pushes the marble from the lower platform (ice) up the ramp to the higher platform (liquid water; see the graphic, right).  The expanding gas transfers its energy of compression to the marble in the form of intrinsic gravitational energy.  The marble on the upper platform has more gravitational (latent) energy than it had on the lower platform (upper arrow).
This process is reversible (lower arrow).  Let’s suppose that gravity, or some additional force, could make the marble roll down the ramp, giving up its intrinsic gravitational energy.  The lost gravitational energy goes to increasing the compression energy of the gas by pushing the piston back into the cylinder again.  In this example, the energy of compression of the gas is exchanged back and forth with the gravitational energy of the marble. 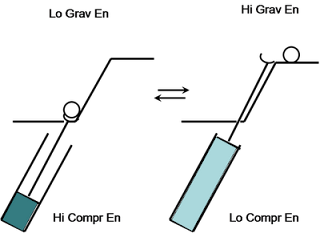