Summary:   Global warming due to man-made emissions of greenhouse gases, arising from burning fossil fuels and other sources, threatens to cause large scale disruptions in our planetary agricultural and economic activities, and of the ecological balance across the face of the earth.  In the past two years the U. S. Department of Energy has implemented new programs and expanded others directed toward identifying new technologies that would reduce greenhouse gas emissions.  Most recently, however, the funding environment for these programs has grown uncertain due to a change in the political landscape in the U. S. Congress.  At this writing the situation is in flux. This post summarizes the present uncertain status of funding for energy programs.
Introduction.  On U.S. Energy Secretary Steven Chu addressed the National Press Club (see the post reporting this speech here).  He advocated support for new federal programs to create domestic industries in the fields of alternative and sustainable energy, and energy efficiency.  This theme was reinforced by President Barack Obama in his State of the Union Speech in January 2011.
As part of the American Recovery and Reinvestment Act of 2009 (the anti-recession fiscal  “stimulus” bill) the Department of Energy received considerable one-time funding, with a duration of two years, to support new research and development in the areas of renewable and sustainable energy, and energy conservation research, among others.  As an example of the programs established, a recent post reported on the Advanced Research Project Agency-Energy (ARPA-E) support for new startup companies, many of which have progressed to receiving additional venture capital funding to expand their activities.  This is considered to be a significant achievement that helps vindicate the ARPA-E program, since the venture capital firms made their decisions as little as one year after the initial ARPA-E awards.  As noted, the federal budget support for these programs ends after two years, i.e., more or less at the present time.
Fiscal Year 2011.  The fiscal year 2011 runs from to .  Every year the President and his Administration submit a proposed budget for a given fiscal year more than six months before it begins, so that the Congress can consider it and prepare the various appropriations.  The Congress, however, (repeating a pattern common in recent years) failed to enact any appropriations before .  When this happens, Congress typically passes one or more of a series of “continuing resolutions” (CRs) that continue federal spending levels from the preceding fiscal year into the actual fiscal year whose budget has not yet been acted on.  This has happened for the present fiscal year, 2011; no federal budget has passed Congress.  At this writing, the current CR expires .
The Congressional elections of resulted in a new Congress, the 112th Congress.  It took office in January 2011. The majority in the House of Representatives changed from the Democratic Party to the Republican Party, and the Senate Democratic Party majority was narrowed.  Since fiscal year 2011 is almost half over, the new Republican majority in the House has introduced a proposal for an extended CR to last through the rest of the fiscal year, one which involves drastic reductions in many programs.
The Republican CR addresses so-called “discretionary funding” in the budget, and focuses on that portion, about 15% of the total, to which it proposes to apply pronounced reductions.  (The CR leaves Social Security and Medicare, whose expenditures are governed by the legal rights of the recipients, as well as spending for the Department of Defense, untouched.)   In this 15% slice of the overall Federal budget, the CR now proposes to reduce spending by $60 billion in the remaining 6 months or so of the fiscal year, compared to the spending rates extended from the previous fiscal year.
For programs in the Department of Energy related generally to addressing global warming and energy efficiency, the proposed reductions in the various programs are very severe, as included in the table presented below: 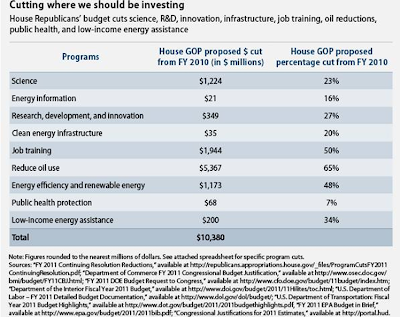 gov/hudportal/HUD?src=/program_offices/cfo/reports/2011/main_toc; “FY 2011 Budget
and Related Information”, available at http://www.usgs.gov/budget/2011/2011Index.asp.
Source: http://www.americanprogress.org/issues/2011/02/budget_cuts_innovation.html
Chairman Hal Rogers of the House Appropriations Committee, in a press release dated , summarized the reductions proposed for the FY 2011 CR.  In it, he states in part, concerning energy-related reductions,
“Funding for non-core research … have been reduced in the bill, and most agencies are prohibited from starting new programs without Committee approval. The Committee also sought to reduce excess and unnecessary spending by cutting Energy Efficiency and Renewable Energy (EERE) and Science accounts – both of which received huge funding levels in the stimulus bill.”
This proposed CR is almost certain to pass the House of Representatives with little or no change.  It is not likely to pass the Democratic-controlled Senate, however, in its present form.  And even if it does, President Obama will most likely veto it.
As noted above, the present situation must be resolved by .  It is not clear at this time how this apparent impasse will be resolved.  One solution would be to extend the FY 2010 CR unchanged to the end of this fiscal year.
Fiscal Year 2012.  President Obama has presented a proposed budget for FY 2012, which begins .  Overall, he proposes budget reductions of $1.1 trillion over 10 years, as a start to addressing growing annual deficits and the expanding national debt.  However, in the face of this effort, the President proposes increasing funding for renewable energy and related programs in the Department of Energy, according to Platts.com's web site.  The overall budget for the department is proposed to increase by 12% over 2010 levels to $29.5 billion.  Importantly, renewable energy research and development programs are proposed to increase by 70% -- almost $1 billion -- for renewable energy R&D, such as solar, biomass, geothermal, and building and industrial energy efficiency, compared to FY 2010 levels.
According to Platt.com, the Energy budget proposes funding of $550 million for ARPA-E, identified above.  ARPA-E has so far only received $400 million in the 2009 stimulus bill, since the program was not supported by the Republican Party at that time.  The proposal also seeks $5.4 billion for the Department’s Office of Science, a $500 million increase about 2010 levels. This is contrary to Chairman Rogers’ proposal (see above).
For those who support the need to address global warming, reduce ’s dependence on imported fossil fuels, and stimulate new economic activity based on renewable energy and energy conservation, the President’s budget proposal is truly heartening.  It is clear that the President and his administration whole-heartedly support expanding these programs in face of the overall atmosphere of reducing federal expenditures.  This budget proposal is only the first step in arriving at actual spending levels, however.  The actual appropriations bill must be written and an identical version agreed to in each chamber of the Congress.  Then the President has to sign the result, if he agrees to its terms.  As seen from recent experience and the fact that the Congress is divided between Republicans and Democrats, considerable hurdles remain to be overcome before the proposed programs are supported by actual expenditures.
Conclusion.  The appropriations that could support federal research and development projects in renewable energy and energy conservation, and related clean energy projects, are in a high state of flux at present.  The funding levels both for current spending and for the year beginning remain to be determined.  This is highly disadvantageous for creating new enterprises in this field, because the high level of uncertainty hinders private equity investors from committing to supporting these innovations.  Yet the participation of private funding is critical for development of alternative energy regimes.
© 2011 Henry Auer
Posted by Henry Auer at 5:25 PM