Summary:  In March 2011 European Commission issued its Energy Roadmap 2050, directed to reducing its overall emissions of greenhouse gases by 80-95% below the emissions level of 1990 by 2050.  The Roadmap implements a cap-and-trade market mechanism with successively lower greenhouse gas emission caps to provide market incentives to move away from use of fossil fuels that burn to form carbon dioxide, the important greenhouse gas (see the preceding post).
This post summarizes the greenhouse gas abatement policies and technologies presented in the Roadmap.  The plan relies, among others, on implementing drastic energy efficiency programs, major migration away from use of fossil fuels and toward renewable energy sources, and to the extent that fossil fuels remain in use, carbon capture and storage technology to remove CO2 before it enters the atmosphere.
The Roadmap is the first international agreement put in place that follows the expiration of the Kyoto Protocol at the end of 2012.  It provides comprehensive and detailed considerations of the many factors, technological, economic and policy-based, involved in implementing such a bold endeavor in an international framework.  As such, it provides a useful example for the nations of the world as they negotiate a successor treaty to the expiring Kyoto Protocol.
Introduction.  In March 2011 the European Commission (EC) embarked on a long term program, its Energy Roadmap 2050 (the Roadmap), to reduce its overall emissions of greenhouse gases by 80-95% below the emissions level of 1990 by 2050 (see this earlier post.  This goal was adopted as a follow-up to the earlier European Union program to reduce emissions by 20% by 2020. Additional goals for 2020 include lowering energy consumption in the EU BY 20% compared to reference projections for 2020, and obtaining 20% of the EU’s total energy, and 10% of energy used in transport, from renewable sources. The Roadmap additionally established the interim goals for emissions reductions of about 40% by 2030, and about 60% reduction by 2040.
The Intergovernmental Panel on Climate Change, established under the United Nations, issued its most recent comprehensive climate report, the 4th Assessment Report, in 2007 .  It determined that an essential objective is to limit the accumulation of greenhouse gases in the atmosphere such that the resulting global average temperature rise be less than 2ºC (3.6ºF) above the level that prevailed before the industrial revolution began. It states that “deep cuts in global greenhouse gas emissions are required according to [climate] science” to achieve this objective.  This is because higher global temperatures are predicted to inflict damages from altered weather and climate events; these are already occurring, as evidenced variously by increased aridity, drought, and wildfires; extreme rain and floods; and sea level rise, among other harmful effects, in recent years.  This objective was adopted at the (2009) and (2010) climate change meetings.  Currently the average global temperature has increased by about 0.75°C (1.4ºF).  Various climate models predict that further global temperatures may increase anywhere from 1.1°C to 6.4°C beyond today’s level.
The previous post detailed the EU’s Emission Trading Scheme (ETS), a cap-and-trade emission reduction program beginning in 2005 to embark on the path to reduce emissions within the member states of the European Union.  The present post summarizes the technologies and policies to be invoked in order to achieve the reductions in greenhouse gas emissions envisioned by the ETS.
Energy Roadmap 2050.  The Roadmap sets out in detail how the EU might achieve its objectives of providing a secure, competitive decarbonized energy economy (see References).  Decarbonization relies critically on implementing a variety of technologies that reduce or avoid emitting carbon dioxide into the atmosphere. This post presents a summary of the significant features of the Roadmap.
Various scenarios for achieving the objectives were explored using an EU-wide energy/economic model; the Roadmap at this time does not settle on adopting any particular one or set of them.
For comparison with the decarbonizing scenarios, the Roadmap defines two baseline scenarios.  The Reference scenario incorporates current projections for economic growth and energy use (as of 2010) including reductions in emissions from the first target date of 2020.  The Current Policies Initiative scenario () updates the Reference scenario primarily by accounting for changing attitudes and policies leading to reduced use of nuclear power in response to the nuclear accident at .
The proposed decarbonizing scenarios to be implemented in providing energy for the EU are:
The High Energy Efficiency scenario implements high efficiency measures in buildings and appliances.  Stringent codes for new construction and appliances will take effect, and, with somewhat greater difficulty, retrofitting of existing structures will be undertaken.  Furthermore, utilities will be obligated to obtain energy savings.  This scenario envisions decreased demand in energy of more than 40% by 2050.
The Diversified Supply Technologies scenario is based on competitive development of a variety of technologies in a market framework.  Carbon pricing (to be accomplished by the ETS; see the previous post) relies on public acceptance of nuclear power and carbon capture and storage ().
The Delayed scenario is similar to the Diversified scenario except that deployment of technology is delayed.  This leads to a higher proportion of nuclear energy being used.
The Renewable Energy Sources () scenario relies on strong support for developing , to a proportion of 75% of total energy, and 97% of electric power, by 2050.
The Low Nuclear scenario resembles the Diversified scenario but assumes no new nuclear power plants are built.  This leads to higher deployment of technologies.
The Roadmap illustrates the proportions of energy that can be provided in 2030 and in 2050 from various sources using the scenarios above in the following graphic. 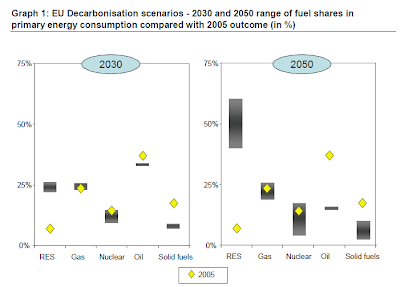 Gray bars: Ranges of proportional contributions envisioned for the various energy sources in the years shown.  Yellow diamonds: Actual proportions for the various sources in 2005.
Source: European Commission, Ref. 1
Graph 1 shows that renewable energy sources, which in 2005 provided only a small fraction of the EU’s total energy, will grow providing anywhere between about 40% and 60% by 2050 (the text in the Ref. 1 mentions as much as 75%, see above).  The contribution of oil decreases significantly, as does that of solid fuels (e.g., coal).  Nuclear energy is not predicted to grow significantly; indeed it may decrease significantly by 2050.
Major changes in the EU’s energy economy.  The Roadmap is predicated on several significant departures from the current energy economy.
Electric power usage is predicted to grow linearly to about 28% of total energy demand in 2050 even under the Reference or scenarios.  Under the various decarbonization scenarios, however, electricity demand grows significantly to a predicted range of about 36-38%, with the main increase occurring after about 2031.  Electricity generation would have to undergo a significant transformation of its physical plant so that it can be 57-65% decarbonized by 2030, and 96-99% decarbonized by 2050.  Clearly, as seen in the graphic above, play a major role in achieving this goal.
The graphic below illustrates the effects of new technologies on achieving decarbonization by 2050.  Overall energy usage is projected to decrease by 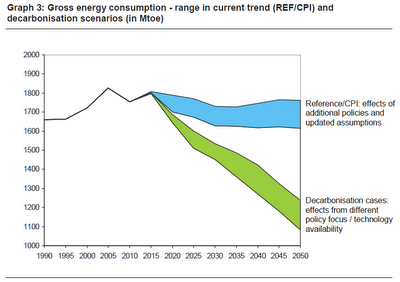