The European Union’s Energy Policy. I. The Emissions Trading System 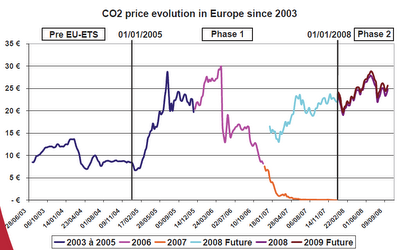 Source: Estimations of post-2012 carbon price in , Nicole Dellero (2008)  http://ec.europa.eu/energy/nuclear/forum/opportunities/doc/competitiveness/2008-10-24/areva--co2prices.pdf.
In this chart, each period’s price performance is color coded as shown.  The pale aqua line represents futures trading for (the lower number of) allowances to be granted beginning at the start of Phase 2.  The EU-wide number of allowances for Phase 2 was 11.8% lower than for Phase 1.  Once Phase 2 began in 2008, the actual allowance price and the futures trading for 2009 allowances followed essentially identical paths (see the chart).
The fall of the allowance price to EUR0/tonne in 2007 has been attributed both to the glut of allowances and to the impending economic slowdown preceding the world financial crisis of the coming years.  Of course, with allowances having no penalty value, sources were free to continue “business-as-usual” rates of emission, rather than to curtail them.  On the other hand, when allowances had a significant price, businesses were able to pass along corresponding price increases to customers, which resulted in windfall profits.
In Phase 3, in addition to the features itemized above, importantly the EU will centrally receive reports on, and verify, emissions from each facility.
Individual firms can reduce emissions and/or generate market profits under the ETS.  They can optionally phase out coal-fired electricity plants by shifting to renewables or gas, improve efficiency by investing in new equipment and creating cogeneration facilities, obtain offsets from emission-reducing programs outside the EU, if available shift generating or manufacturing loads to more efficient facilities, purchase allowances from more efficient companies, and actively trade on allowance exchanges.
Recent ETS results.
According to EurActive (accessed ) industrial emissions of CO2 fell in 2009 by 11% from the previous year.  This reflected the diminished economic activity brought on by the global recession.  Overall for the EU, emissions in 2009 fell by 7% year-on-year, due to the recession and the growth of renewable energy sources, according the European Environmental Agency (EEA; accessed Jan. 22, 2012). For 2009, emissions were below the pre-established cap, meaning that EU industrial establishments had surplus allowances that remained unused.  (Under the EU ETS, unused allowances can be saved for future use within a phase, and can even be carried forward to the next phase.  Thus the recession could potentially affect the market price for allowances for many years to come.)  EU emissions for 2010 increased 2.4% year-on-year, but the EEA believes the EU is still on track to achieve its Kyoto Protocol emission reduction objective for 2012.  The increased emissions for 2010 compared to 2009 reflect recovery from the recession in as well as the effects of an unusually cold winter which led to increased heating from fossil fuels.
As of , EEA states that overall EU emissions for 2010 were 15.5% below the reference level of 1990 emissions.  For the original EU-15 (the EU membership at the time of the Kyoto Protocol), the emissions reduction was 10.7% as of 2010, well ahead of the goal of 8% by 2012 established under the Kyoto Protocol.  The EEA points out that, in order to achieve the EU reduction goal of 20% by 2020, additional measures will have to be implemented.  These would presumably include putting the additional policies identified for phase 3 into practice.
Using alternative data and sources, CO2 emissions and per capita emissions of the full EU-27, the original EU-15 and the are compared in the table below.
CO2 emissions in 2010 (million tonnes CO2) and CO2/capita emissions 1990-2010 (unit: tonne CO2/person)
EU-27 = Full 27 current Member States.
EU-15 = 15 EU Member States at the time the Kyoto Protocol was ratified.
Source: Olivier, J.G.J., Janssens-Maenhout, G., et al., (2011), Long-term trend in global CO2 emissions. 2011 report, : PBL/ (accessed ). http://edgar.jrc.ec.europa.eu/news_docs/C02%20Mondiaal_%20webdef_19sept.pdf
Annual greenhouse gas emission trends, and projections to 2020, under the EU ETS are shown in the following graphic. 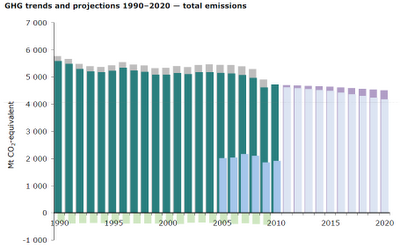 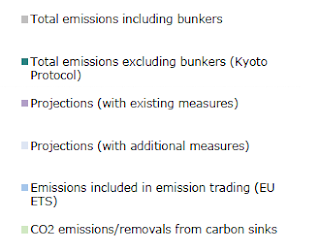 GHG trends and projections 1990–2020 — total emissions.  Bunkers = fuel oil used in marine shipping.  The dotted line represents the goal for reduction of emissions by 2020 under the EU ETS.  Projections with existing measures represent the policies in place under Phase 2 of the ETS.  Projections with additional measures represent the policies to be implemented under Phase 3. Emissions included in emission trading (EU ETS) represents those portions of greenhouse gas emissions regulated under the ETS during Phase 1 and Phase 2, beginning in 2005.  Source: European Environmental Agency (accessed 01/23/12);

http://www.eea.europa.eu/themes/climate/ghg-country-profiles/trends-and-projections-2011-cp/eu-27_tp2011_country_profile.pdf.
The pale blue bars representing the emissions experience under the EU ETS through 2010 reflect the performance under Phase 1 (2005-2007) and the first three years under Phase 2 (2008-2010).  It is seen that regulated emissions increased during Phase 1, presumably reflecting the initial problems encountered in issuing and pricing emission allowances.  Performance during Phase 2 appears to be improving, as may be expected from the expanded coverage and the improved auction market for allowances.
Emissions projected through 2020 continuing the policies of Phase 2 lead to modest reductions in emissions, but are predicted not to suffice to attain the ETS goal of a 20% reduction by 2020 (dashed line).  Implementing expanded emissions reduction policies such as those of Phase 3 are expected to approach the reduction needed to reach the ETS 2020 goal.
The graphic below compares CO2 emission of the , EU27 and EU15 over 20 years from 1990 to 2010 with those of .  Whereas emissions of the EU nations

0                                                                 10,000
Millions of tonnes of CO2
Source: Olivier, J.G.J., Janssens-Maenhout, G., et al., (2011), Long-term trend in global CO2 emissions. 2011 report, : PBL/. http://edgar.jrc.ec.europa.eu/news_docs/C02%20Mondiaal_%20webdef_19sept.pdf
decreased during this interval, those of the increased modestly, and show a significant reduction in the second decade of this period.  In contrast, CO2 emissions for show a dramatic absolute increase, by about 350%, over the same two decades.  Clearly, (and other developing countries of the world) need to embark on drastic policies to reduce their emissions in order for global greenhouse gas levels to stabilize at a level that avoids the most extreme of the predicted consequences of continued global warming.
Conclusions
The European Union implemented its Emissions Trading System in 2005; clearly, planning for this program began even before entry into force of the Kyoto Protocol in that year.  Establishing the ETS has been a significant achievement, as it required that each of the 27 current EU members enact enabling legislation built around the supranational framework of the ETS.  Because the EU ETS was the earliest emissions reduction program implemented in the world, achieved legislative backing from every member nation, and established significant goals for reducing greenhouse gas emission, it represents a significant step for the world of limiting emissions and constraining the rise of the planet’s long term average temperature.
The ETS is built around an emissions cap and allowance trading mechanism.  Its first three years of operation, termed Phase 1, was overtly acknowledged to be a trial period.  Indeed this turned out to be necessary, for the mechanism for allocating allowances turned out to be too generous, and the auction market for allowances at the outset was not seamless; the auction price fell to EUR0.  Now nearing the end of Phase 2, the ETS will be smoother in many ways, and will affect a larger number of emissions sources, as the EU enters Phase 3.
In the , cap-and-trade emissions markets underlie the Northeastern states’ Regional Greenhouse Gas Initiative (RGGI; see this post) and California’s Global Warming Solutions Act (see this post).  RGGI has been operating for a few years, although its goals are quite limited.  The U. S. House of Representatives passed an energy bill including a cap-and-trade emissions reduction mechanism in 2009 modeled after the EU ETS, but no action was taken in the Senate and the bill was never enacted into law.
Emissions rates of and the are the world’s first and second highest.  Neither nation is bound by the Kyoto Protocol; China because at the time of its negotiation developing countries were excluded from coverage, and the U. S. because the Senate voted unanimously against considering it for ratification.  Since that time, the 193 nations of the UNFCCC have been unable, in spite of annual gatherings, to craft a successor to the Kyoto Protocol, which expires at the end of 2012.  Currently the earliest date for placing a successor agreement in force may be 2020 (see this post on the Durban Platform).   In the meantime, as seen above, and other countries continue to expand their annual rate of greenhouse gas emissions at a rapid pace as they seek to attain a level of industrialization comparable to that of developed countries.  The , in the absence of a unified national legislated energy policy, continues to create a partial patchwork of various state-based and regional energy programs of differing scope and ambition.
Cap-and-trade acts on the supply side of the energy economy by constraining fossil-fuel based energy output.  Carbon taxes on fossil fuels, if implemented, would act on the demand side, constraining fuel and energy use.  Neither regime is without its problems and detractors, but this writer favors a carbon tax (one example is described in this post) for its directness and simplicity of operation, assuming exceptions to coverage are minimal.  A major objection has to do with a perceived constraint on economic activity because purchasing power may be drained off by the tax.  This can be countered by an annual rebate to fossil fuel consumers; even so the principal objective, creating a psychological restraint of demand would be achieved.  Revenue from the tax should also support deployment of renewable energy, thereby supporting new employment in the energy economy.
The nations of the world need to come together to limit greenhouse gases as soon as possible, in order to minimize the harms arising from global warming.  The EU ETS provides a demonstration of one way to contribute to achieving this goal.
References
1. Estimations of post-2012 carbon price in , Nicole Dellero (2008)  (Slide presentation); http://ec.europa.eu/energy/nuclear/forum/opportunities/doc/competitiveness/2008-10-24/areva--.co2prices.pdf
2. Making Cap-And-Trade Work: Lessons From The European Union Experience, Daniel C. Matisoff, Environment Magazine, Jan.-Feb. 2010; http://www.environmentmagazine.org/Archives/Back%20Issues/January-February%202010/making-capfull.html.
3. Long-term trend in global CO2 emissions. 2011 report, Olivier, J.G.J., Janssens-Maenhout, G., et al., (2011), : PBL Netherlands Environmental Assessment Agency and European Commission’s Joint Research Centre; http://edgar.jrc.ec.europa.eu/news_docs/C02%20Mondiaal_%20webdef_19sept.pdf
4. Approximated EU GHG inventory: early estimates for 2010; European Environmental Agency, , 2011;  http://www.eea.europa.eu/publications/approximated-eu-ghg-inventory-2010.
© 2011 Henry Auer
Posted by Henry Auer at 6:59 PM