Pope Francis Urges Action on Climate in His U. S. Visit

Pope Francis visited the in September 2015.  He addressed the issue of global warming as a worldwide concern on several occasions.  He stressed that we have to begin now, acting in concert, to stabilize the planet and improve our common home, the earth in its entirety.  The need is great not only to protect the environment for our children, but also as a matter of justice for today’s peoples who are impoverished and cannot take action on their own to protect against the damages from warming.


Both the Old and New Testaments provide the basis for taking action; the moral foundation motivating Pope Francis is drawn from the Golden Rule.  Leaders of other religions also are calling for action at this time.


The Pope’s message, if taken to heart, can help inspire the world’s leaders to reach agreement on climate action at the United Nations conference at the end of this year.

Pope Francis visited the in September 2015.  He repeated the need for the world to combat global warming in many of his appearances.  Earlier, in June 2015, he issued his encyclical “Laudato Si’, On Care for Our Common Home” , in which he laid out theological and ethical underpinnings for combating global warming.  A major theme is the biblical urging that humanity should flourish by enjoying the bounties of the natural world, while admonishing that we not exploit those resources for profit and wealth, to the exclusion of others.


On , the Pope visited President Obama at the White House.   Addressing the President in his speech, he stated, “accepting the urgency, it seems clear to me … that climate change is a problem [that] can no longer be left to a future generation….We are living at a critical moment of  history.  We still have time to make the change needed to bring about…sustainable and integral development.”  He went on to say that we need to address the problem not only to improve the common home we leave to our children, but also to enhance the lives of the many peoples living today. He further stated “humanity has the ability to work together in building our common home”.


The Pope addressed the U. S. Congress, and other administration officials, on (see image below). 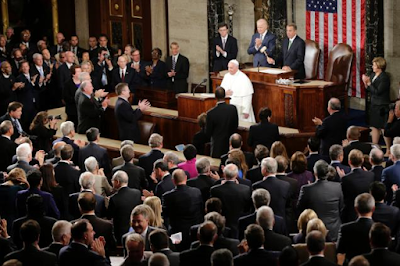 
In his speech he expanded on the themes from the previous day.

Referring repeatedly to passages drawn from his encyclical, the Pope stated


“I call for a courageous and responsible effort to ‘redirect our steps’, and to avert the most serious effects of the environmental deterioration caused by human activity. I am convinced that we can make a difference and I have no doubt that the – and this Congress – have an important role to play. Now is the time for courageous actions and strategies, aimed at implementing a ‘culture of care’ and ‘an integrated approach to combating poverty, restoring dignity to the excluded, and at the same time protecting nature….We [can] limit and direct technology…to devise intelligent ways of… developing and limiting our power’….”


The Pope recognized the important role that business can play in this undertaking, since it “is a noble vocation, directed to producing wealth and improving the world. It can be a fruitful source of prosperity…, especially if it sees the creation of jobs as an essential part of its service to the common good.”


Pope Francis additionally addressed the United Nations General Assembly convening for its deliberations on Sustainability Development Goals, on Sept. 25, 2015.  He addressed many themes of concern to him, including climate change and environmental justice, stating “[a]ny harm done to the environment, therefore, is harm done to humanity….A selfish and boundless thirst for power and material prosperity leads both to the misuse of available natural resources and to the exclusion of the weak and the disadvantaged”.

Can Pope Francis speak to a scientific issue?  Some might consider it unusual, or perhaps even unwarranted, for a sitting pope to urge action on an issue so firmly rooted in science as global warming is.


The unequivocal answer is that he can.  Scientifically, his early experience, now backed up by the resources of the , fully qualify him to state his position.  Early in his life he studied chemistry at a level corresponding to high school and early university training .  Perhaps this early exposure partly informs his current concern about global warming.


But most important is the central role played by clerical and lay scientists who are members of, or associated with, the Pontifical Academy of Sciences and the Pontifical Academy of Social Sciences in preparing the encyclical “Laudato Si’” and earlier publications on this subject.  The input from both of these institutions forms the foundation of the encyclical. It blends strong abhorrence over unending exploitation of the earth’s fossil fuel resources (when speaking of global warming), for the short-term gain of the businesses involved, with the profound distinctions between developed societies and the impoverished peoples of the world.


These concerns justify his position on global warming from an ethical point of view.  The Pope feels that our exploitation of resources degrades our “common home”; instead we should care for it for the benefit of future generations.  At the same time concentrating the benefits of economic activity among developed countries leaves the rest of the world without adequate defenses against the harms from global warming, and without adequate resources to develop proactive adaptations on their own to protect against future harms.


Pope Francis takes on global warming with grace and fortitude.  Watching video replays of the Pope’s three appearances mentioned here, one is struck by the combination of humility yet strong conviction with which he confronts global warming.  He speaks in universal, ecumenical terms of the need for all humanity to engage in fruitful dialog to limit further warming.  His position is firmly grounded in the theology of the Old and New Testaments, and on the ethics that flow from these texts.  He starts from the Old Testament blessing on humanity to prosper from our caring development of earth’s natural bounties.  He has repeatedly cautioned that this easily lapses into the unsanctioned exploitation of those resources for short term gain, profit and power.  He further bases his strong emphasis on social justice on the Golden Rule, found in both the Old and New Testaments, to do unto others as we would have them do unto us.  Failure to attend to the needs of the less fortunate clearly violates this Rule.


Other religions also support action on global warming.  A large group of American Jewish rabbis is distributing “A Rabbinic Letter on the Climate Crisis” proclaiming similar principles, and calls to action, as the Pope.  Likewise, an “Islamic Declaration on Global Climate Change” has been issued .  It is a detailed exposition of both the science underlying the global warming crisis and an exposition of the foundations in the Qur’an for preserving the natural world from exploitation, while promoting the welfare of humanity.

There are many reasons to take action to address global warming and its damages.  These include scientific, economic, political and ethical bases for reducing greenhouse gas emissions and adapting to trends already under way.


Pope Francis has brought the moral force of his position as leader of the Roman Catholic Church and, more widely, as a recognized force for justice in the world, to urge all humanity to combat warming.  He is joined in this call to action by leaders of other religions, including Judaism and Islam.


All the nations of the world must coalesce around this common objective.  We must cast aside past parochial interests that have prevailed to prevent action.  The next climate negotiations, the United Nations Conference of the Parties (i.e., all the members of the U. N.), will be held in two months in .  We need to work at all levels to achieve the needed agreement at this Conference to advance worldwide programs to limit emissions and promote thermal stabilization of our common home.