How Sea Level Rises: A Tutorial


Summary.  Among the documented effects of global warming has been a rise of the average sea level around the globe since 1900.  This post explains, in tutorial fashion, how this happens.


First, the water in the oceans expands in volume as its temperature increases.  Expansion is constrained to occur only in the upward direction, leading to sea level rise.  Second, land-based glaciers and ice sheets melt from their upper surfaces as the air they contact warms above the melting point of water.  Third, ice shelves buoyed by the ocean in melt from their lower surfaces as the ocean circulating under them warms.  All these processes contribute to observed sea level rise.  Both melting processes are expected to continue indefinitely as long as warming produces temperatures in the air and in the underlying ocean that remain above the melting point.

Introduction.  One of the consequences of global warming identified by climate scientists is sea level rise.  Higher levels of the oceans’ waters potentially affect shorelines and low-lying islands all around the world.


The United Nations-sponsored Intergovernmental Panel on Climate Change (IPCC), in its Fifth Assessment Report (5AR), includes the following graphic showing the extent to which the global average sea level has risen in past decades up to the present. 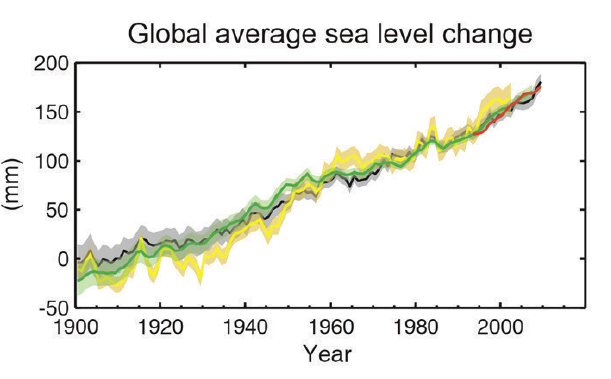 The graphic shows that since 1900 global average sea level has risen by about 200 millimeters (about 7.9 in.).  It is expected to continue rising indefinitely into the future (see below).


Expansion of water upon heating.  Like all forms of matter, water expands when it is heated and contracts when it is cooled.  At a temperature of 20ºC (68ºF) water expands by a factor of about 0.00020 per ºC (0.00011 per ºF).  We may think that the expansion occurs in all directions, as if the water of the ocean were in an elastic balloon.  This would have the effect of minimizing expansion in the vertical direction.  But in fact, the waters of the oceans are constrained on the bottom by the ocean floor and on the sides by shorelines, so that all the expansion occurs only upwards.


Oceanographers have been measuring temperature changes in the ocean by depth, and find that the ocean temperature has increased in the last several decades down to depths of several hundred meters (see below).  For the sake of this discussion, if the temperature increased on average from 20ºC to 21ºC down to a depth of 700 meters (2,275 feet; defined as the “upper ocean”) expansion would cause the surface of the water to rise by 140 mm, or 5.6 in.  This simple calculation shows that an increase in surface temperature of the ocean is a contributing factor for sea level rise.


Melting of land-based ice.  Some sea ice arises by freezing of the ocean water.  This process transfers some water from liquid to solid, say as the polar winter arrives, which then melts back to the liquid during the polar summer.  Such cyclical changes in state have no net effect on sea level.


Transfer of land-based ice to the oceans, however, a one-time process, represents a net addition of water to the sea, raising its level.  The new water was not part of the ocean system before melting.   There are several sources of new ocean water.  Mountain glaciers at high elevations are melting around the world as a result of global warming.  The water courses through streams and rivers, and ultimately reaches the sea.


Ice sheets over land masses, such as the ice sheet, melt from their upper surfaces when the air is above the freezing point.  This water penetrates gaps in the ice sheets and finds its way to the ocean.  Additionally, land mass glaciers at the interface with the sea calve icebergs as the glacier flows downhill toward the sea.  The solid ice in the icebergs and the water that it gives rise to as it melts contribute to raising the sea level.


This process can be diagrammed using the following simplified graphic:


The ice cube model can be taken to represent the melting of high-altitude mountain glaciers, land-mass ice sheets such as the ice sheet, and, indirectly, the calving of icebergs from glaciers moving into the sea; the latter movement is accelerated by global warming.  In addition some glaciers that were earlier in contact with the ocean have melted so fast that their leading edges have receded from the ocean and are now found at some considerable distances from the shoreline.

Melting of Antarctic Ice Shelves.  Ice shelves, such as are found in Antarctica, are large areas of ice that are the oceanic ends of land-based ice sheets that flow over the ocean and float on its surface.  Ice shelves are distinguished from ice sheets by the fact that they cover ocean water, rather than land.  An ice shelf is diagrammed in the graphic below:

Simplified model of an ice shelf extending over the ocean.

An ice shelf does not primarily melt from the upper surface.  The Antarctic region is sufficiently cold that surface melting does not occur to a significant extent.  Rather the ice shelf melts from below, by contacting the liquid ocean, whenever the water temperature is above the equilibrium melting temperature of the ocean, about -2°C (28.4°F; this lower melting point is due to the dissolved salts present in ocean water).


Melting of the ice shelf eats away at its substance from its lower surface, as shown in the following graphic: 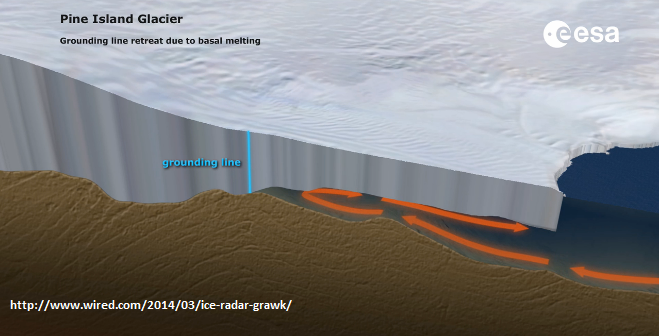 Mechanism of melting of an Antarctic ice shelf from its lower surface.  Warm ocean water flows toward the shore over the ocean floor (orange arrows).  It transfers its heat to the undersurface of the ice shelf, melting it.  The water containing the melted ice remains near the upper surface because, having a lower salt content, it is less dense than the ocean water flowing in.  This newly-melted water flows back toward the bulk ocean (orange arrows).

The result of this melting process is to add water substance to the ocean that was not present before, raising the level of the ocean.  In addition, the ice shelf thins and recedes as melting proceeds, including breaking off of ice floes that will continue to melt.  The rate of melting gets greater as the ocean temperature becomes increasingly warmer than the melting point of ocean water.


Ocean warming is in fact happening.  5AR estimates  that 90% of the excess heat arising from global warming is stored in the oceans.  The historical trend of the total amount of heat contained in the oceans has been rising from 1950 (the time when these measurements began) to 2010, as shown in the graphic below: 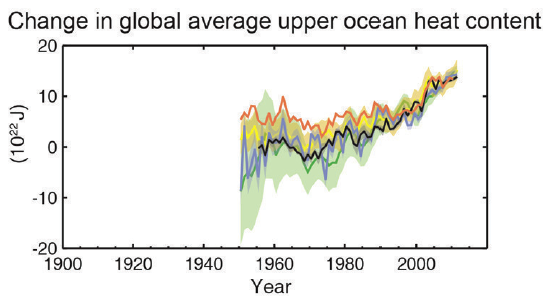 Change in the global mean upper ocean (0–700 m) heat content in joules (a unit of energy) from 1950 to 2010.  The data in different colors come from different data sets, and the shadings in the same colors represent estimates of statistical variability for the given data set.  The values along the vertical axis show the changes from a zero point assigned relative to the mean of all datasets for 1971, and have been computationally adjusted to overlap for the period 2006-2010.
Source: IPCC 5AR Working Group I; http://www.climatechange2013.org/images/report/WG1AR5_SPM_FINAL.pdf.
As the heat content increases the ice shelf will melt more rapidly and more extensively.  Climate scientists expect the global ocean heat content to continue increasing, so that ice shelf melting will continue indefinitely.  As noted above, ice shelf melting can only stop if the ocean temperature remains at or below the ocean melting point for ice.
Conclusion
There are two processes contributing to rising sea levels due to global warming, expansion of the volume of water contained in the oceans and net melting of ice mass to become liquid water.
Thermal expansion is a natural property of water and other liquids.  As water warms it occupies more volume.  This expansion probably occurs for several hundred meters of depth, raising the level of the surface of the ocean.
Melting of glaciers and land-based ice sheets occurs primarily from their upper surfaces, as heat is transferred from the air to the ice solid, liquefying it.  Antarctic ice shelves, on the other hand, melt from below due to contact with ocean water whose temperature is above the ocean’s freezing point.  In both cases, the rate of melting increases as the temperature of the air, or the liquid ocean, respectively, becomes warmer.  Melting increases the total volume of the earth’s oceans, leading to a rise in the global average sea level.
Thermal expansion will cease if and when the global average temperature stops increasing, reaching a new, higher plateau value.  Enhanced melting of ice mass will continue indefinitely, however, as long as the global average temperature remains above the freezing point of ice or of ocean water.  Unfortunately, since carbon dioxide, the principal greenhouse gas, remains in the atmosphere for several centuries, even achieving near-zero annual rates of emission will only stabilize the global average temperature at some new, higher value; with current technology carbon dioxide cannot be removed from the atmosphere.  This means the average temperature of the atmosphere and of the oceans will not fall, and will likely continue to rise.  For this reason land-based ice sheets and Antarctic ice shelves will continue melting indefinitely for generations to come.  The effects on ocean shorelines around the world will be considerable and essentially permanent.
© 2014 Henry Auer