By the end of the present century, 2100, man-made global warming could be a major existential threat to humanity’s way of life on earth, and to the broad ecological balance underpinning our lives and those of future generations.


Everyone will feel the consequences of worsening global warming.  I’m a scientist who is deeply concerned for the welfare not only of our planet’s present inhabitants, but especially for our progeny:  those whom we already know, and those yet to be born.  You and your family, including your children and your several grandchildren, as well as the members of your incoming administration and their families, will be among those who will be impacted as warming continues.


Why should we care about global warming?   Here’s a montage of images showing a sampling of damage and harm already brought on by warming, both domestically and abroad: 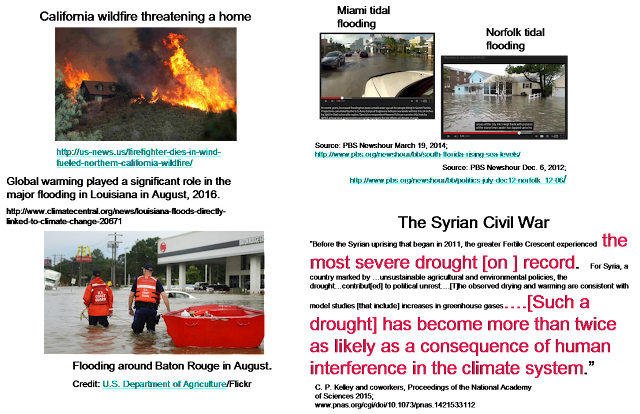 Extreme events negatively impact our society and our economy.  The examples shown here have been determined to be at least partially due to the effects of global warming.  Clockwise from upper left:  A wildfire in heat- and drought-stricken California threatens a home in 2015 (Source: http://us-news.us/firefighter-dies-in-wind-fueled-northern-california-wildfire); fair weather tidal flooding encroaches on coastal communities in Miami, FL in 2014 (Source: http://www.pbs.org/newshour/bb/south-florida-rising-sea-levels/) and in Norfolk, VA in 2012 (Source: http://www.pbs.org/newshour/bb/politics-july-dec12-norfolk_12-06/); a scientific paper in the Proceedings of the [U.S.] National Academies of Science (2015) showing that the Syrian civil war arose partly from  socioeconomic instability due to a multi-year drought, brought on by global warming, in the years preceding the hostilities (emphases added; Source: www.pnas.org/cgi/doi/10.1073/pnas.1421533112); and heavy flooding in Baton Rouge, LA in 2016, due to extremely intense rainfall (Source: http://www.climatecentral.org/news/louisiana-floods-directly-linked-to-climate-change-20671).

The Agreement of December 2015 to limit global greenhouse gas emissions is a landmark accord. The , and other major emitters of greenhouse gases provided important leadership in reaching agreement.  197 member states of the United Nations signed the accord, and by mid-November 2016 115 nations have ratified it.  It entered into force on , with participation.


President-elect Trump, in your interview with the New York Times on you stated “I have an open mind to [climate change]. We’re going to look very carefully.”   The nations signing the Paris Agreement look to the for continued leadership in its implementation, and are apprehensive about the possibility that you will pull the out of the agreement.
=================================


Science provides an objective view by which we see the world.  We humans can’t change the scientific framework underlying the causes of global warming, its worsening, and its harmful effects.  Denying the present egregious climate patterns cannot change them or make them disappear.


Climate scientists understand that excess man-made CO2 leads to increased warming of the Earth system due to the greenhouse effect.  The relevant facts and scientific data are summarized here:


·        Carbon dioxide (CO2) is an important atmospheric greenhouse gas (one that traps heat leaving the surface of the earth and returns some of it to the surface.  Other man-made chemicals are also greenhouse gases, but in this letter I focus on CO2).


·        CO2 is a main product formed by burning fossil fuels; the excess CO2 formed when humans use fossil fuels for energy has been accumulating in the atmosphere since the industrial revolution began.


·        Physical scientists recognized the greenhouse activity of CO2 as early as the nineteenth century, and understood even then that continued burning of fossil fuels could lead to warming of the earth.


·        A particular property of CO2 (carbon isotope ratios) measured over time shows categorically and irrefutably that the increasing amount of CO2 in the atmosphere originates from humans’ use of fossil fuels, and not from any other possible source.


·        Most CO2 we add to the air stays in the atmosphere for centuries or longer.  So the coal burned in the nineteenth century produced CO2 that’s still in the air today.  This is why man-made CO2 is such a problem.


·        Because of the greenhouse activity of CO2 the earth’s temperature has been increasing, following the same long-term trend as the increase in CO2.


·        Climate models show that the recent increase in global average temperature is due to the increasing excess man-made CO2 in the air, not simply to natural physical processes of the earth system.


Historical global warming up to the present has already caused major damage and visited significant harms on humans the world over.  President-elect Trump, the extreme events presented in the graphic montage above are just a small, unrepresentative set of examples of damaging, destructive and or disruptive events already brought on by global warming.  The damages and disruptions brought by these events require significant fiscal outlays at the local, state and federal levels to repair damage and to construct adaptive infrastructure in the hope of averting future damage.  These expenses have been unforeseen and so not included in budgets.  Ultimately they are borne by our taxpayers.  In addition, insurance companies will need to include new, and higher, risk premiums due from insured clients to account for the increased likelihood of future claims.  These expenses, consequences of burning fossil fuels, are not built into the sales price of the fuels, which reflect only the costs of extraction, processing and distribution of the fuels.


President-elect Trump, the demand for fossil fuels and resulting further global warming will only increase in future decades unless we intervene.  The rapidly increasing global population clearly adds to energy demand.  As developing countries grow economically they demand more energy to sustain their progress.


·        These models show that future excess global warming depends in almost a straight-line fashion on the excess addition of CO2 to the earth’s atmosphere.  Limiting CO2 emissions will minimize the future temperature increase.


·        In the absence of measures adopted worldwide to constrain further CO2 emissions by 2100 the global average temperature could reach about 8.5ºF (4.7ºC) above the average temperature during the interval 1861-1880.  Presently that average has already increased by about 1.6ºF (0.9ºC).


·        The kinds of harms and damages already identified would become much worse in the absence of emission constraints.


President-elect Trump, the Agreement affords your administration the opportunity to expand investment in renewable energy, creating large numbers of new jobs.  In the coming decades it has been estimated that US$20 trillion will be needed to provide expanded global energy demand. Your administration should enthusiastically embrace the Agreement, using it as an incentive to promote profitable new investments in renewable energy that will expand employment among ’s workers.