Summary:  The Regional Greenhouse Gas Initiative, including the six states and four , is the oldest greenhouse gas reduction regime in the U. S, using a cap-and-trade mechanism. Greenhouse gases are responsible for global warming occurring in recent decades.  It is also the most modest, affecting only emissions originating from electric power plants.  Since it began operating in 2009, it has collected large sums of money and has led to the creation of many new jobs and businesses.  While this modest beginning is praiseworthy, it is important to strive toward major, significant reductions in greenhouse gases, so that the increased level of greenhouse gases in the atmosphere can be stabilized.
Introduction:  In recent years three regional initiatives have been set in place in the U. S. The Western Climate Initiative, formalized in February 2007; the Midwestern Greenhouse Gas Reduction Accord, set in place in November 2007; and the Regional Greenhouse Gas Initiative (RGGI), established in July 2007.  RGGI is discussed in this post.  The three regional accords encompass 23 states in the as well as several Canadian provinces.  Additional states and provinces are “observers” of the various accords.
The American states participating in these three agreements, and their greenhouse gas emissions, are shown in the following map: 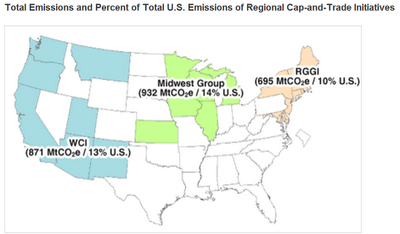