Summary:  recently became the world’s largest emitter of greenhouse gases, overtaking the U. S.  As a result of its intensive program to become a modern industrial state, it has installed, and continues to develop, new energy-producing facilities that emit large amounts of greenhouse gases.
Its new 12th Five Year Plan seeks to bring onto a path of increasing the efficiency of its energy production, and the energy efficiency of its economic output.  Its objectives include lowering the emissions intensity per unit of economic output by 17% by 2015, and by 40-45% with respect to the 2005 level by 2020, even while its primary energy consumption will likely increase by up to 5% per year through 2015.  Coal-based energy will continue to play a major role.  will begin implementing market-based incentives to reduce emissions, and will promote a variety of energy efficiency programs.  Also, it will continue its major effort at reforestation.
’s 12th Five Year Plan is ambitious and represents a new departure for the country.  Earlier this year the European Union issued its goal of lowering greenhouse gas emissions by at least 80% by 2050.  Of major emitters, only the does not yet have a national policy in place for reducing the emission of greenhouse gases.
INTRODUCTION.
Man-made greenhouse gases, such as carbon dioxide (CO2), are recognized by climate scientists to cause warming of the planet.   The United Nations sponsored conferences of the world’s nations seeking to reach agreement on measures to limit greenhouse gas emissions, thereby minimizing warming of the planet.  The Kyoto Protocol of 1997 included the world’s developed countries in its coverage, but excluded developing countries, including , from its jurisdiction.
China has long maintained that, as a populous developing country, an appropriate measure of its energy usage and its emissions of greenhouse gases should be its energy intensity or its emissions intensity, whereby these measures are based on its gross domestic product (), rather than the actual amount of energy used or emissions produced.
This post reviews the energy and emissions goals projected by in its 12th Five Year Plan (FYP) issued in March 2011, covering 2011-2015. In the first of three sections we review ’s past energy usage and greenhouse gas emissions.  This section also summarizes projections of ’s energy use and greenhouse gas emissions modeled last year, prior to the release of the 12th FYP.  These topics were presented in an earlier Warmgloblog post.
With this background, the second section provides a summary of the new FYP.  The third section presents conclusions and analysis of the FYP.
REVIEW OF ’S ENERGY OF 2010
Overview of Current Energy Production in
has embarked on a vast program to expand its economy and bring material benefits to large segments of its population.  From 2000 to 2009 its economy expanded by about 10% per year ( Energy Information Administration (USEIA))
The Wall Street Journal on cited the International Energy Agency (Note 1)  as reporting that China has become the world’s largest consumer of energy, outstripping the U. S.
’s energy use has grown dramatically over the past two decades, as its rapidly expanding economy has depended on new energy-intensive industries and extensive construction of new infrastructure projects (see the graphic below).

Total primary energy consumption for the (rose) and (yellow), in millions of metric tons of oil equivalent from 2000 to 2009 (as estimated).
Source: International Energy Agency.  Format © The Wall Street Journal (http://online.wsj.com/article/SB10001424052748703720504575376712353150310.html?mod=googlenews_wsj#project%3DCHENERGY0719%26articleTabs%3Dinteractive).
In 2009 consumed 2.3 billion tons of oil equivalent, while the overall usage in the was 2.2 billion tons. As recently as 10 years ago, ’s consumption had been only half that of the U. S.  Consumption by the over the same period has remained essentially constant, and even declined slightly in 2008 and 2009 (see the graphic).
The sectors of ’s economy that use energy and produce greenhouse gas emissions are shown in the following graphic. 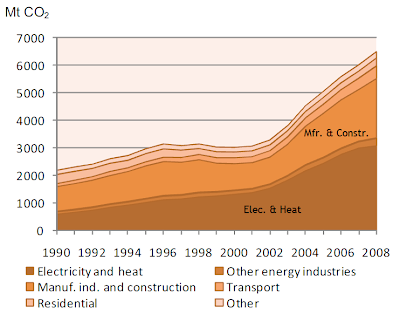 CO2 emissions in by sector of the economy over the period 1990-2008.  Mt, millions of metric tons.  The shading codes for the sectors below the graphic go from darkest to lightest, first left to right, then top to bottom, and in the graphic go darkest to lightest from the bottom to the top.
Source: International Energy Agency, CO2 Emissions From Fuel Combustion, 2010 Edition http://www.iea.org/co2highlights/co2highlights.pdf © OECD/IEA.
CO2 emissions essentially tripled over the 18 year period shown, reflecting ’s robust expansion in all areas of economic activity over this time.  Electricity generation and heating is responsible for a large fraction of ’s CO2 emissions; as seen in the graphic, this portion of the emissions increased greatly over 2002-2008.  Electricity accounted for 48% of ’s emissions in 2008; 79% of the electricity was generated from coal.  Most of the remainder originated from hydroelectric power.
Energy Intensity.  As a developing country with a population of 1.3 billion people, the per capita energy use of energy in is far lower than in the (see the following graphic).

Total primary energy consumption per capita for the (rose) and (yellow) from 2000 to 2009 (as estimated), in metric tons of oil equivalent.
Source: International Energy Agency.  Format © The Wall Street Journal (http://online.wsj.com/article/SB10001424052748703720504575376712353150310.html?mod=googlenews_wsj#project%3DCHENERGY0719%26articleTabs%3Dinteractive).
The trend in increases sharply over the decade shown whereas that for the is steady or even declining in 2008 and 2009.
The emissions intensity based on economic activity for the five nations of the world with the highest emissions all decreased between 1990 and 2008 (see the following graphic, following the vertical axis only).  made 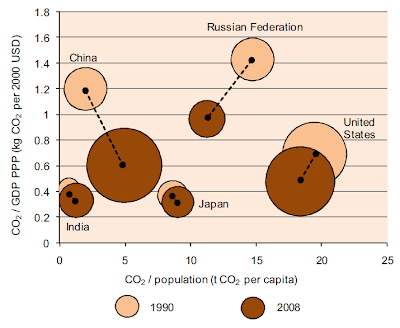 Trends in CO2 emission intensities for the top 5 emitting countries over the period 1990 (tan) to 2008 (brown).  The size of each circle represents total CO2 emissions from the country in that year.  Thus this graphic represents three pieces of information: the population intensity of CO2 emission (tonnes per capita) along the horizontal axis; the economic intensity of CO2 emission (kilograms CO2 per 2000 US$ of gross domestic product () along the vertical axis; and the total amount of CO2 emitted in 1990 and 2008, proportional to the size of the circles.
Source: International Energy Agency, CO2 Emissions From Fuel Combustion, 2010 Edition http://www.iea.org/co2highlights/co2highlights.pdf © OECD/IEA
’s emissions intensity based on population, however, almost doubled over this period (following the horizontal axis), and the total amount of CO2 emissions almost tripled (see the area of the circles, and the graphic third above).
China’s Predicted Future Energy Use.  The World Energy Outlook, issued by the EIA in November 2010, projected China’s energy usage and sources of energy for the period 2008 to 2035.  Among its predictions, the graphic below shows anticipated electricity generated from coal for and other regions of the world, based on its New Policies Scenario.  This scenario seeks to predict behavior based on the modest voluntary recommendation included in the Copenhagen Accord of 2009.  Coal-generated electricity in (brown-orange) is predicted approximately to double in this time period. 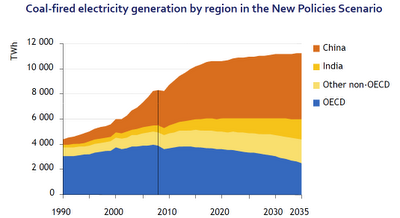 Reproduced from World Energy Outlook 2010 © OECD/IEA.  Data to the left of the solid vertical line at the year 2008 are actual.   Coal-fired generation beyond 2008, to the right of the vertical line, is a projection based on the New Policies Scenario.   A watt-hour (Wh) is a unit of energy used in characterizing electricity generation and usage. TWh, terawatt-hours, or thousands of billion watt-hours.  The author presumes TWh refers to annual production of electric energy.
The predicted changes in the various sources from which primary energy is obtained in the period 2008-2035 is shown for China (brown-orange) in the graphic below. 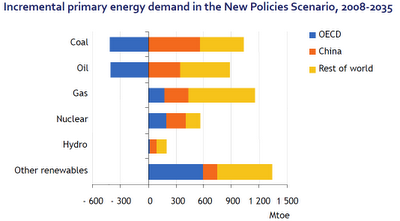