Producing More Natural Gas in the U. S.: The Pickens Plan

Summary.  The uses about 25% of the world’s energy, yet has only about 4% of the world’s population.  As part of its energy supply, the uses large amounts of petroleum, over half of which is imported.  Much of the petroleum is used to fuel transportation.
Natural gas is a fossil fuel that is widely abundant in the , and is more accessible as a result of recent technological improvements.  Natural gas could be used supplant our dependence on petroleum as a fuel.  Nevertheless, extracting this natural gas is tied to controversial problems related to leakage of natural gas, or methane, a far more potent greenhouse gas than carbon dioxide, from the wells into the atmosphere, and to potential contamination of ground water and surface water with toxins from the drilling compositions used.
The entrepreneur T. Boone Pickens is promoting extensive use of natural gas to fuel transportation, in order to supplant gasoline, which is derived from petroleum including the oil imports.  He has helped author legislation that would provide tax incentives for the use of natural gas in vehicles, and for the manufacture of vehicles that can burn natural gas.
Developing natural gas as an interim solution to providing energy to the transportation market would be a useful contribution, providing the problems associated with its production can be resolved.
Introduction.  Fossil Fuel Use in the U. S. The , with 4% of the world’s population, uses about 25% of its energy.  According to the U. S. Energy Information Agency,  a source of independent energy statistics, as of 2009 the U. S. used 18.8 million barrels of petroleum a day, of which 9 million barrels a day was for gasoline used in transportation.  72% of oil consumption was for transportation.  Supplying this consumption included 9.7 million barrels a day of net petroleum imports (11.7 barrels of crude oil and other petroleum products are imported, but some petroleum was also exported), corresponding to 51% of total consumption.  The produced 7.3 million barrels of total petroleum products a day, which included crude oil as well as the liquefied equivalent of natural gas.
Coal is the worst of the three fossil fuels, producing the most carbon dioxide (CO2), the important greenhouse gas, for a given amount of heat energy released.   Greenhouse gases arising from human activity are a major contributor to global warming.
Natural gas is the most efficient of the fossil fuels, emitting the least CO2 for the amount of heat energy obtained.  It can be used in electricity plants as well as to fuel cars and trucks when the engine is properly modified.  Nevertheless, natural gas fuel still emits CO2.  Optimally we should move to renewable energy as soon as possible.

Natural gas is an abundant domestic fuel resource, especially with the development in recent years of hydraulic fracturing technology (“fracking”) to extract it from gas-containing shale formations that occur widely in the U. S.  (see the map below). 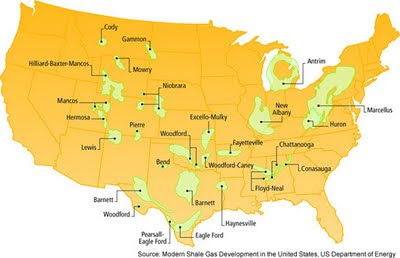 Gas shale formations in the , shown in pale green.  Copied from http://fracfocus.org/hydraulic-fracturing-how-it-works/hydraulic-fracturing-process
World-wide, supplies may be sufficient to last as long as 250 years.
At least one major oil company, Shell, is actively producing natural gas as a supplement to extracting crude oil.  In 2012 the company will produce more natural gas than petroleum.  Shell notes that modern gas-fired electricity generating plants emit half the CO2 of modern coal-fired plants, and 60%-70% less than older, less efficient coal plants.
Hydraulic Fracturing.  Fracking involves two aspects.  The first is horizontally-directed drilling, whereby a vertical shaft is drilled to a depth predicted to contain gas within the rock, then the drilling is reoriented horizontally to reach the oil shale formations.  Several horizontal extensions can be extended from one shaft.  The second aspect is the use high pressure fracturing liquids to rupture the gas-bearing rock and release the natural gas to be brought to the surface.  The fracturing liquids are controversial because they contain proprietary mixtures of chemicals which potentially can contaminate ground water or surface water.
Problems with Natural Gas. The problems with natural gas are two-fold.  Natural gas (i.e., methane) is itself a greenhouse gas which, when released without burning into the atmosphere, is 25x as potent a greenhouse gas as CO2.  The New York Times on April 11th, 2011 reported that today’s natural gas wells, especially those using hydraulic fracturing (“fracking”) to release the gas from unconventional shale, leak significant amounts of methane into the atmosphere.  These wells therefore worsen the global warming conundrum, rather than help it.
Second, fracking uses toxic chemicals in water to get the gas out.  Unfortunately the chemicals, as well as toxic substances (metals, radionuclides) leached from the shale, may contaminate ground water and may be released into surface waste water.  The Energy Policy Act of 2005, shepherded by Vice President Dick Cheney, explicitly excluded fracking from coverage under the Safe Drinking Water Act (SDWA).   The New York Times reports  that a study by Rep. Henry Waxman and others finds that hundreds of millions of gallons of fracking compositions containing carcinogens regulated under SDWA were in common use in natural gas recovery.
This important issue was addressed in a hearing held by the U. S. Senate Committee on the Environment and Public Works on .  Principal witnesses included Robert Perciasepe, Deputy Administrator of the Environmental Protection Agency (EPA).  One important policy disagreement centered on whether it was sufficient, for protection of the public and its water resources, to allow each state to regulate hydraulic fracturing wells individually, or alternatively was it necessary for the EPA to issue regulations applicable nation-wide.  A second related to instances in which waste water from fracking activities passes through treatment facilities with the fracking contaminants remaining in the effluents, rather than having been removed by treatment.
The Pickens Plan for Use of Natural Gas in Transportation.  T. Boone Pickens, a businessman active in the oil and gas industry, recognizes the disadvantageous position the is in with regard to its energy economy.  Although the biggest single country supplying the U. S. with oil is , a friendly neighbor, a large fraction comes from countries of the Organization of Petroleum Exporting Countries (OPEC), whose geopolitical interests do not necessarily coincide with those of the U. S.  Using the 2009 rate of imports, but the April 2011 price of about $100/barrel, the is transferring about $219 billion a year to OPEC countries alone.  This is not in this country’s political or economic interest.
Pickens has responded to this situation with a plan to develop natural gas and alternative energy in order to reduce our dependence on imported petroleum.  This post focuses on the natural gas portion of the plan.  Pickens recognizes that natural gas should not be considered a permanent or complete solution the energy challenges facing the , but rather should be used in the interim to allow fully alternative, renewable energy sources to be developed.  In the long run he believes that, for transportation, new technologies need to be developed and implemented that effectively replace fossil fuels entirely.
In the meantime he believes that natural gas can serve as a bridge fuel that is more advantageous than using gasoline and diesel made from imported crude oil.  He proposes that cars, light trucks and heavy freight trucks all run on natural gas.  He especially believes that fleet operators and heavy trucks would benefit; his web site states that currently there are no batteries adequate for driving heavy trucks.
Mr. Pickens has promoted the NatGas Act of 2011 (New Alternative Transportation to Give Americans Solutions Act of 2011) (H.R. 1380), sponsored by a bipartisan group of 76 representatives.  The bill offers tax credits a) for use of natural gas as an alternative fuel or in an alternative fuel mixture, b) for a new vehicle powered by natural gas, including heavy trucks weighing more than 26,000 lbs, c) for vehicles converted to operate on natural gas, d) for a refueling facility that dispenses natural gas, and e) to manufacturers producing vehicles operable with natural gas.
Conclusion.  Expanded use of natural gas as a fuel for use domestically in the would contribute significantly, in the near term, to lowering emissions of CO2.  By using natural gas we reduce payments of large amounts of money to foreign suppliers of petroleum, many of whose interests do not necessarily coincide with those of the U. S.  The Pickens plan for promoting use of natural gas as a transportation fuel makes sense in the near term.  Nevertheless, the significant problems associated with producing natural gas by hydraulic fracturing, which will be the dominant technology going forward, must be satisfactorily investigated and resolved.  At best, natural gas may make sense to serve as a fuel for use during the transition to fully renewable energy.  We should develop renewable energy as soon as we can.