The scenarios show that global action to reduce emissions to date have been insufficient to achieve a desired goal, that of limiting the world’s average temperature increase to 2ºC (3.6ºF) above the level before the industrial revolution began.  This means that the world will have to invest in mitigation more intensively.  Only certain stringent scenarios suffice to meet this objective; other more lenient ones yield higher greenhouse gas levels that result in a temperature rise higher than the goal.

If we picture the world’s energy economy as a supertanker with high inertial momentum, early intervention by one or two tugs to slow the tanker and steer it to its terminal would have been sufficient.  But now it grows late, and many tugs working at full power will be needed to bring the tanker to its terminal without a collision.


The world has to coalesce around the common objective of reaching agreement on effective mitigation goals and strategies in order to stay within the 2ºC limit.


The IPCC Assessment Reports carry great weight among climate scientists and policymakers around the world.  Each part is assembled by a large group of researchers who are specialists in their respective fields, drawn from many UN member states.  The draft reports are subjected to two rounds of scientific review and approval by selected governments before being released (see Details at the end of this post.)  This process assures the most rigorous scientific validity and forms a sound basis for policy development.


Mitigation of Greenhouse Gas Concentration in the Atmosphere


SPM defines mitigation as “a human intervention to reduce the sources or enhance the sinks of greenhouse gases”.  (A source emits GHGs into the atmosphere and a sink removes them from the atmosphere).


Trends in Recent Annual GHG Emission Rates. The cause of short-term  warming of the earth system is the increase in atmospheric concentration of greenhouse gases (GHGs) brought on by human activity associated with the industrial revolution.  This includes largely the burning of fossil fuels that emit the GHG carbon dioxide (CO2), as well as increases in other sources of CO2 and other GHGs as well.  This is shown in the graphic “Historical Trend of Manmade GHG Emissions” (see Details), presenting rates of emission of important GHGs from 1970-2010.  These have increased critically in recent years: average emissions increased by 1.3% per year in the three decades from 1970 to 2000, but became more drastic, 2.2% per year, between 2000 and 2010.  This increase in the annual emission rate is foreseen to continue unabated in the absence of meaningful mitigation measures.


Projected Increases in Annual GHG Emission Rates to 2100.  SPM summarizes climate models that were used to project future emission rates assuming a wide range of final GHG concentrations accumulated by the year 2100.  The worst of these, the “baseline”, assumes no significant mitigation measures will be taken.  The baseline leads to more than 1,000 parts per million CO2 (ppm; volumes of CO2 in 1,000,000 volumes of air) by then.  A graphic showing the projected trends under several emission scenarios is shown as “Projected Emissions Trajectories to 2100” in Details.  The increases shown are due to population growth, and, especially from sharp increases in energy-using economic activity.


Projected Temperature Increases.  The baseline is foreseen to produce a long-term global average temperature increase above pre-industrial times of 3.7 to 4.8ºC (6.7 to 8.6ºF); currently the temperature has increased by about 0.6 to 0.7ºC (1.1 to 1.3ºF).  (The full range of projections from the 5% to the 95% confidence level is much wider, showing the temperature could reach a higher average temperature: 2.5 to 7.8ºC).


The models for the most stringent mitigation measures are intended to keep the long term global average temperature from exceeding 2ºC (3.6ºF) above the pre-industrial level by 2100, corresponding to a GHG concentration of 450 ppm.


Mitigation Measures Are Needed to Keep Temperature Below the 2ºC Goal.  SPM evaluates how successful the various emission scenarios would be in achieving the 2ºC goal by 2100.  This builds on the modeling described above and shown in the graphic “Projected Emissions Trajectories to 2100”.  It concludes with high confidence that worldwide mitigation steps in place or pledged today are insufficient to attain the 2ºC goal, and that delaying further, more stringent mitigation strategies beyond 2030 would make it more difficult to put them in place.  This would also have the effect of reducing the range of mitigation choices available to reach the 2ºC goal.   Failure to keep the emission rate in 2030 below the required level would require “much more rapid scale-up of low-carbon energy over” 2030-2050, and “higher transitional and long term economic impacts”.  Because infrastructure installations underlying the energy economy have long service lifetimes, continuing a “business-as-usual” expansion of GHG-producing facilities “may be difficult or very costly to change, reinforcing the importance of action for ambitious mitigation”.  Compared to emission rates for 2010, successful mitigation pathways are modeled to reduce emissions by 90% between 2040 and 2070, and may even turn negative (i.e., become GHG sinks) by 2100.


Improvements in efficiency of energy infrastructure components as well as changes in human behavior that lead to reduced energy demand are needed to achieve the required reduction in emission rates.  If fossil fuel use were to continue, it would have to be coupled with carbon capture and storage (or sequestration; ), which is not yet considered to be a proven available process (please see these two posts).


National and regional mitigation policies already in place have modest results.  Cap-and-trade (market) mechanisms for reducing emissions, according to SPM, have mixed success because of loose caps or caps set too leniently.  Fuel taxes have the long-term result of reducing emission by 0.6 to 0.8% for a 1% increase in purchase price.


International efforts to constrain emissions at the global level are under way.  Negotiations to follow up on the expired Kyoto Protocol are in progress; the intention is to conclude a binding worldwide treaty by 2015 and for it to become effective in 2020.  The Protocol crucially excluded developing countries from coverage, retaining only developed countries under its terms.


Global warming is truly a global issue, one that confronts each and every one of us on our planet.  Humanity’s emissions of the greenhouse gas carbon dioxide from burning fossil fuels for energy, and of other gases as well, warm the entire earth.  This is a truly global problem, because one nation’s emissions do not affect only its territory; they are dispersed into the atmosphere and contribute to warming the entire planet.


Total accumulated GHG levels in the atmosphere, not annual emission rates, are what determine the extent of increase in the long-term global average temperature.  On the time scale of the next several human generations, CO2, the principal GHG, persists in the atmosphere once emitted (after about 30% is consumed by photosynthesis and by dissolving into the oceans; certain other GHGs are spontaneously lost over shorter times).  For this reason, as long as humanity continues to emit CO2 the world’s average temperature will continue to increase.  Reducing the annual GHG emission rate to near zero only has the effect of minimizing the extent by which the world’s temperature will increase.  A zero emission regime can never return the atmosphere to a lower temperature that prevailed in earlier decades, for the next several human generation times.


A Stitch in Time.  The IPCC has been urging the world to migrate away from use of fossil fuels, and invest in renewable energy, since its first Assessment Report in 1990.  At that time, extreme weather and climate events were not yet prevalent, so reducing greenhouse gas emissions then could well have minimized the need to remedy future damage; the presumed emissions reductions would have kept the world’s temperature increase low enough that extreme weather and climate events would have been less severe.  SPM shows, however, that that opportunity has been largely, but not irretrievably, lost.


The urgings in successive assessment reports to begin meaningful emission reductions reflect perfectly the meaning of the old saying, “a stitch in time saves nine”.  In other words, early repair of a (tailoring or climatic) defect involving minimal effort avoids the need for later extensive repair of the worsening defect that was left untended.


The prominent climate scientist Thomas F. Stocker concluded in 2013   “…every year counts….  [The longer] the starting time of [a global mitigation program] is delayed, the [more] low [limiting temperature] targets are progressively lost.  The door for these climate targets closes irreversibly.”


SPM is a clarion call for action, sooner, not later.  Internationally, and at the national and personal level, the people of the world have to coalesce around this objective, and work with good will to achieving success.


Significance of IPCC Assessment Reports.  5AR, like its predecessors, is produced by hundreds of experts from around the world, and is subjected to review by other experts and by appropriate governmental bodies before it is approved and accepted for release.  Technical details in Part 3 of 5AR are based primarily on peer-reviewed journal articles and reports produced by renowned nongovernmental organizations or government agencies.  The exhaustive review assures that the released report both represents the current state of scientific and technical expertise, on the one hand, and the points of view of governments of the IPCC, on the other.


The steps involved in preparing the reports are summarized here , including details for Part 3:

As a result of this thorough drafting and review process, the ARs are rigorously objective.  The reader cannot seriously believe that the ARs offer prejudiced or directed findings or opinions. Indeed, the approval and acceptance process likely leads to consensus positions on unresolved or contentious issues while minimizing the importance granted outlying results or evaluations. 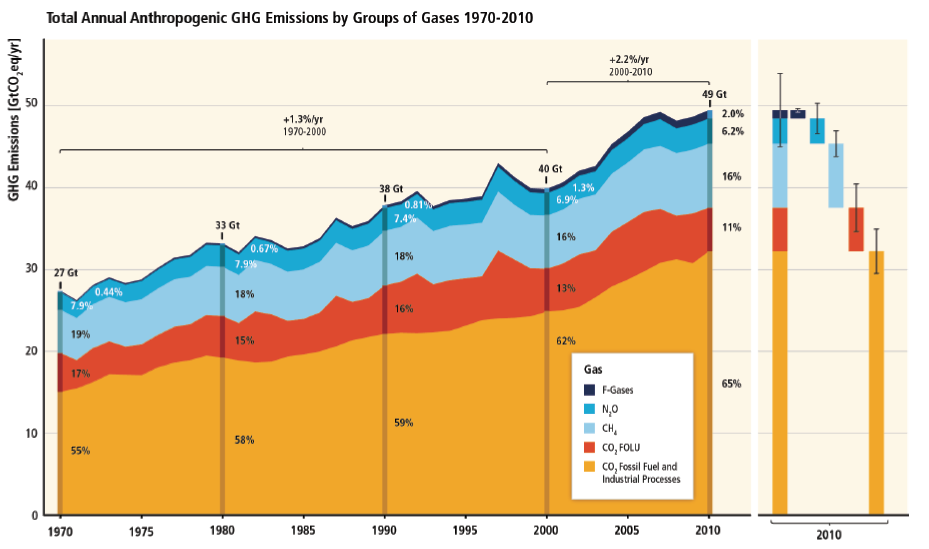 Annual emission rates from 1970 to 2010 of GHGs in gigatonnes (billions of metric tons) per year measured as equivalents to the warming potential of CO2.  ORANGE, CO2 from burning fossil fuels; RUST ORANGE, CO2 from forest loss and land use changes; LIGHT , methane (CH4); DARK , nitrous oxide (N2O), which arises from agriculture and other human activities; and BLACK, fluorine-containing carbon compounds frequently used in refrigeration.


LEFT PANEL shows annual emission rates, with numerical amounts and percentage of each category shown every 10 years.  The horizontal bars in the UPPER PORTION of the LEFT PANEL show that emissions increased by 1.3% per year from 1970 to 2000, but became more drastic, 2.2% per year, between 2000 and 2010.


RIGHT VERTICAL BARS give the values for 2010 with “I-beam” error bars shown, for, left to right, the total annual emission, and the emissions for fluorine-containing carbon compounds, nitrous oxide, methane, CO2 from forest loss and CO2 from fossil fuels.