The Administration’s Clean Power Plan will significantly reduce greenhouse gas emissions from the electric power industry over the next fifteen years.


Global warming affects all humankind.  Changing weather patterns, consisting of greater and more frequent weather extremes have become more and more common in recent years and decades.  Around the world, extreme rains and floods, droughts and unprecedented sea level rise have occurred in ways that we are now accepting as being “new normals” of weather which humanity did not experience in earlier years.  While we cannot point to individual events as being caused by global warming, the frequency of occurrence and patterns around the world are all consistent with the predictions that global warming will worsen extremes of weather and climate going forward.  The warming arises because of humanity’s burning of fossil fuels for energy as well as from other human activities, not from any natural cycling of climate patterns.


Relative effectiveness of fossil fuels.  Carbon dioxide (CO2) is the principal greenhouse gas contributing to global warming.  The fossil fuels used to produce energy yield different amounts of heat per weight of CO2 resulting from combustion.  This is a consequence of the intrinsic chemical properties of each fuel, and cannot be changed by engineering or ingenuity.  These differences are shown in this table:


The table shows that burning coal produces twice as much CO2 as does natural gas when burned for energy.  (Other references give slightly different numbers without affecting this overall conclusion.)  In other words, use of coal as a fuel, say, for generating electricity, releases twice as much CO2 into the atmosphere as does burning natural gas to obtain the same amount of heat, i.e., to generate the same amount of electricity.  If humankind is concerned about minimizing the worsening of global warming, we would benefit greatly by reducing the use of all fossil fuels, and especially coal.
Coal demands of electric generation.  A typical coal-fired electricity generating plant has a power capacity in the megawatt (MW) range.  To have this capacity, it burns large amounts of coal.  The largest coal-fired plant in the U. S. is the Robert W. Scherer Power Plant in Juliette, Georgia .  When operating to capacity, the facility burns almost 1,300 tons of coal every hour, or 11 million tons a year.  The coal used at Scherer comes from the Powder River Basin in Wyoming.  It is transported by train to the plant, a trip of 1,800 miles.  The coal arrives in trains 124 cars long; such a train can reach as long as two miles in length.  A picture of a coal train is shown here. 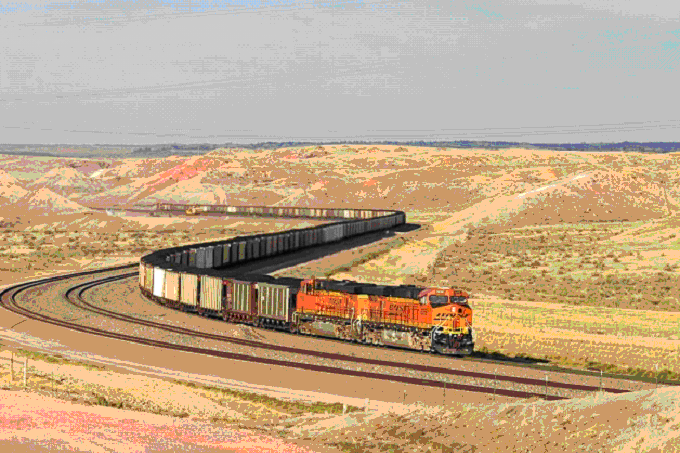 
The Scherer facility consumes 3-5 such trainloads of coal every day.  When burned, this coal yields 27 million tons of carbon dioxide annually.  The facility has four separate generating units, each with a capacity of 880 MW.   So smaller facilities might use perhaps one-quarter, or one-half, for example, of the amount of coal that the Scherer plant uses. Overall, the U. S. has about 1,000 fossil fuel-fired generating plants, and, since many plants have more than one generator, a total of about 3,100 generating units that fall under the CPP.
The U. S. Clean Power Plan.  President Obama heralded the release of the Final Rule for the Administration’s Clean Power Plan (CPP) on August 3, 2015.  The proposed rule was released over one year earlier and is described here.  The CPP addresses greenhouse gas emissions, primarily CO2, produced by electricity generation in the U. S.  Emissions from this sector of the energy economy are a main component of overall greenhouse gas emissions in the U. S.
Over 4.3 million comments from stakeholders and the public on the proposed rule were received by the Environmental Protection Agency (EPA), many of whose considerations were incorporated in the Final Rule.
The CPP’s goal is to reduce emissions from electricity generation by 32% below the levels of 2005 by the year 2030.  Importantly, the plan does not dictate how these goals are to be met.  Rather, it recognizes that the features of each state’s generation infrastructure differ from one another.  As a result, the specific reduction goal for each state has been assigned differently to account for these distinctions.  In addition, each state is given the responsibility of devising its own specific plan for attaining its particular reduction goal.  Among the general paths to reducing emissions, the CPP names retrofitting existing power plants, eliminating noncompliant power plants, and installing renewable energy facilities.   Additionally, states can trade emission allowances among themselves to help attain their objectives.
Opposition to CPP.  Legislative and industrial opponents of the CPP began expressing their concerns as soon as the Final Rule was issued.  Here are some arguments being presented.
The CPP is illegal or even unconstitutional.  The Supreme Court, in v. Environmental Protection Agency and others (2007) interpreted the Clean Air Act, originally passed in 1970, as including the authority to regulate CO2 as an atmospheric pollutant if EPA found it to endanger the welfare of American citizens.  Following up on the Supreme Court’s decision, EPA did subsequently find that the gas threatens the health and welfare of Americans, and of our environment, in 2009.  As a result of this finding, EPA has the legal authority to regulate CO2 emissions.
To the knowledge of this writer the question of the constitutionality of this rulemaking power is not being considered by the courts at this time.
Opponents have called the CPP a “War on Coal”.  In doing so they seek to place the burden of reorganization of the electricity generating industry on President Obama and his administration.  Use of coal in generating electricity has been declining for more than a decade, as has been the number of working coal miners.  A graphic representing the decreasing use of coal is shown here: 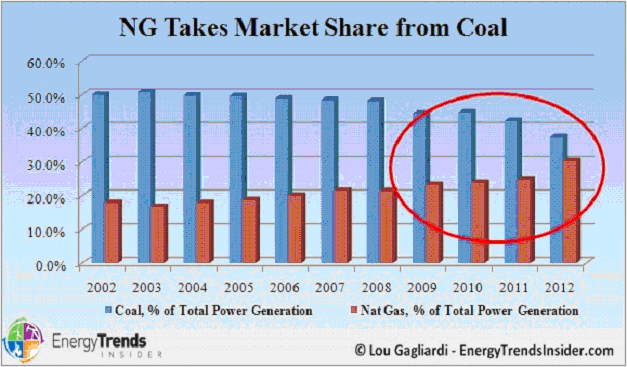 Comparison of the use of coal (blue bars) and natural gas (red bars) from 2002 to 2012.
Source: http://www.energytrendsinsider.com/wp-content/uploads/2013/03/nat-gas-takes-market-share-coal.jpg?00cfb7
The graphic shows that the percent share of use of coal in electricity generation has been declining since well before President Obama took office in January 2009.  Perhaps opponents may wish to call this finding “Bush’s War on Coal” (not appropriate) or “Capitalism’s War on Coal”.  In fact the principal factor underlying the diminishing role of coal, and the increasing percent share of use of natural gas, is the growing availability of gas in the due to the increased use of hydraulic fracturing to produce it.  This has resulted in higher gas production and a lowering of its cost.  The increased availability of natural gas began during the administration of President George W. Bush.
In spite of the increasing layoffs among Appalachian coal miners, the Congressional delegations from these areas appear not have their interests high on their agendas.  Only Rep. David McKinley, Republican of West Virginia, teaming with Rep. Peter Welch, Democrat of Vermont (not a coal mining state), offered a bill for assistance to miners, in Sept. 2014.  Additional searching does not show that this initiative progressed further in Congress.  President Obama’s administration, however, granted $7.5 million in June 2014 to Eastern Kentucky Concentrated Employment Program Inc. to help retrain out-of-work miners.   This action is not consistent with a supposed Administration “War on Coal”.

Clearly market forces expected in a capitalist economy are responsible for the declining share in the use of coal.  The CPP does not institutionalize a “War on Coal”, but in view of the profoundly higher rate of emission of CO2 resulting from its use (see above), the Plan is likely to lead to further reductions in coal use.
The CPP will produce only an insignificant decrease in global emissions.  This writer heard this argument expressed on the National Public Radio program “Here & Now” on .  Such statements are not supported by the facts.  The is a major global emitter of greenhouse gases, and the CPP alone has the potential of reducing emissions by almost 10%.  In addition, representatives from all United Nations members are convening in December 2015 to finalize a global agreement to limit greenhouse gas emissions from all members.  A rigorous stand by the at the domestic level will enhance its ability to obtain meaningful reductions from other nations.  This is a very important factor going forward.


Conclusions
Coal is a major fossil fuel used in electric power generation, but results in twice the greenhouse gas emissions per amount of heat generated than the other major fossil fuel, natural gas.  The Obama administration has issued its CPP which would reduce emissions by 32% below 2005 levels by 2030.  This is a significant emission reduction program.  Coupled with the Administration’s regulation to increase transportation fuel efficiency by almost a factor of two by 2025 it will have a major effect on the energy economy of the U. S.