Summary.  The atmospheric CO2 concentration has just exceeded 400 ppm, and is continuing to grow.  More importantly, contemporary CO2 levels since the industrial revolution have always exceeded the highest levels found in the geological record for 800,000 years.  Furthermore, the rate of growth of atmospheric CO2 levels is itself accelerating.  The excess CO2 originates from burning fossil fuels.  Changes in CO2 levels in the geological record, while considerable, occur on a scale roughly 60 times slower than the contemporary changes.


Introduction. Contemporary climate scientists have been monitoring the atmospheric concentration of carbon dioxide (CO2), a major greenhouse gas, for many decades.  Prior to that, paleoclimate scientists, those who seek to reconstruct ancient climates using the geological record, have examined CO2 contained in ice cores drilled in major glaciers and ice fields, among other modalities for estimating ancient CO2 amounts.  The present measured level of atmospheric CO2 exceeded 400 parts per million (ppm; volumes of CO2 contained in 1 million volumes of air) for the first time last week.  The popular news media picked up on this landmark event as an indicator of a worsening trend in global warming; in fact this situation has been a dire one for some time without the human esthetic preference for a round “hundreds” number.


This post presents the contemporary record of atmospheric CO2 and places it in the context of an extended paleoclimate record.  The present atmospheric CO2 content and trends are indeed unprecedented for the past 800,000 years.


The Contemporary CO2 Record.  Charles Keeling began direct measurements of atmospheric CO2 levels in 1958 atop the Hawaiian volcano , at 13,678 ft (4,169 m), in 1958.  Those measurements continue to the present day.  The site was chosen to avoid major influences of human activity in more civilized or urban settings; it is isolated in a large ocean, and not affected by large populations.  Generally, measurements taken at this location are thought accurately to reflect CO2 emanating from at least the entire Northern Hemisphere.  The record up through 2012 is shown in the following graphic. 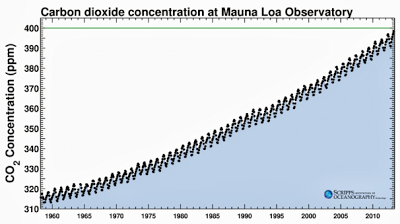 On May 9 the CO2 concentration was recorded as 400.15 ppm.
Source: Scripps Institution of Oceanography presenting data gathered at the U. S. National Oceanographic and Atmospheric Administration facility on the summit of .  Accessed .   http://keelingcurve.ucsd.edu/.
Two features of the graphic are important.  It shows that atmospheric CO2 has been increasing, from about 317 ppm in 1958, to just less than 400 ppm in 2012.  It surpassed 400 ppm on (accessed ).  There is no evidence that the accumulation of atmospheric CO2 is slowing down.  Second, the rate of accumulation of atmospheric CO2 is also increasing.  A quick glance at the graphic shows that an averaged line for CO2 accumulation is getting steeper.   Indeed, the rate of increase of CO2 concentration has grown from about 0.7 ppm per year in the late 1950s to 2.1 ppm per year during the last 10 years.
(The measurements are so accurate and sensitive that they reflect seasonal fluctuations seen as annual waves, higher in the northern hemisphere winter, when green plants are quiescent and humans produce more CO when heating their homes, and lower in summer, when green plants remove CO2 from the air and generally less fuel is used for space conditioning.)

The “Recent” Historical Record.  Now we will examine the CO2 dating from the year 1700 CE (common era).  CO2 concentrations for the atmosphere from times before the measurements began are obtained from glacial ice cores.  As snow and ice fall onto glaciers of the and small bubbles of air are entrapped by the solidifying ice.  Eventually the ice is solid enough that its entrapped air bubbles cannot equilibrate with the ambient atmosphere any more; the bubbles then entrap air representative of the time at which the precipitation solidified.  These air bubbles are harvested by climate scientists in time sequence by drilling ice cores, about 5 in (12.5 cm) across and capturing the bubbles as they are released in a carefully controlled laboratory environment.  The cores are layered year by year, so it is easy to enumerate the age of the bubbles.
The following graphic shows the atmospheric CO2 concentration from 1700-2012 CE.  Ice core data were used for 1700-1958, and the atmospheric record, as shown above, for 1958 to the present. 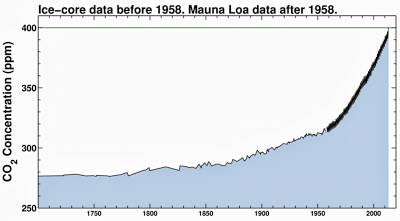 CO2 concentrations for the period prior to and through the Industrial Revolution, from 1700-2012 CE.  Data from ice cores for 1700-1958, and from the record after 1958.  This image is the same as presented in the last graphic below, in Panel B). Source: Scripps Institution of Oceanography; http://bluemoon.ucsd.edu/co2_400/co2_800k_zoom.png
The atmospheric CO2 concentration is essentially unchanged from 1700 to 1800, showing that additions to the atmosphere from, for example, decay of vegetation and human use of firewood, was balanced by photosynthetic uptake and other processes that deplete CO2.  But as the industrial revolution took hold after 1800, and expanded radically in the 20th and 21st centuries, the concentration grows higher and higher, and at more and more rapid rates, as time passes.  The emission of CO2 into the atmosphere and its removal are no longer in equilibrium because of the additional burden of CO2 emitted arising from burning fossil fuels to power the industrial revolution.  This is more than a simple surmise or hypothesis.  A particular physical property of the CO2 in the atmosphere changes with time along a path that follows essentially the exact same curve with time.  This property is one that shows conclusively and without question that the added CO2 originates from fossil fuels.  It is concluded that human activity, burning fossil fuels for energy that powers industrialization around the world, is the cause of the sharply rising CO2 concentration in the last 160 years.
The Paleoclimate CO2 Record.  Ice cores from , extending as deep as about 9,840 ft (3000 m) provide CO2 concentrations going back 800,000 years.  Results are shown in the graphic below. 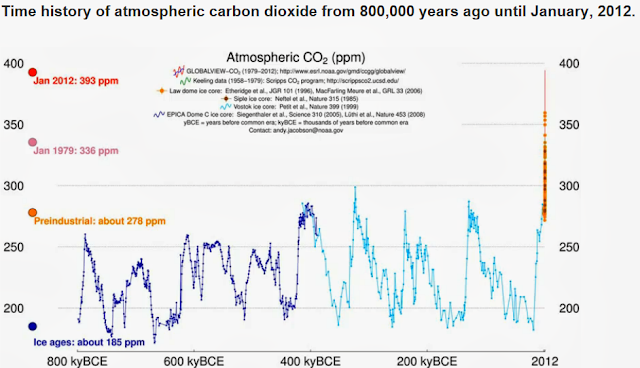 Combined results from ice cores at several locations extending from 800,000 years before the present at the left, in blue and aqua, up to the present at the right.  The orange and red points at the right are data for the Industrial Revolution, such as presented in the previous graphic.  kyBCE, thousands of years before the Common Era.
Source: National Oceanographic and Atmospheric Administration (accessed ).
http://www.youtube.com/watch?v=vA7tfz3k_9A&feature=player_embedded#at=203.
This dramatic image shows that atmospheric CO2 levels oscillated over geological time scales of several hundreds of thousands of years, with many increases and decreases.  The changes, when compressed to this time scale appear to be abrupt and sudden (discussed further below).  Nevertheless, the highest concentration over this time scale is usually under about 280 ppm, and attained about 300 ppm on one excursion.  High concentrations of CO2 would correspond with warmer climates, reflecting the greenhouse effect of the gas.  There are, furthermore, several periods below 200 ppm.
It is highly significant that practically the entire record for the time of the industrial revolution has higher CO2 concentrations than found throughout the 800,000 year interval illustrated above.  Thus, although popular interest focused last week on the fact that concentrations exceeded the round number of 400 ppm, it is far more significant that CO2 concentrations have been above levels found in the 800,000-year geological record for the entire time since the industrial revolution began.  Humanity’s burning of fossil fuels has disrupted the natural CO2 cycle that has existed geologically for at least 800,000 years in unprecedented quantities and with unprecedented speed.
Contemporary CO2 emissions vastly exceed geological emission rates.  The previous graphic includes many periods in the geological record that appear to the eye of the casual observer to show rapid emission (or depletion) rates.  Visual images can be very powerful in this regard.  But it is critical to scale the sharp changes to the very long time scales shown on the horizontal axis above.
This writer has consulted the raw data table for the points shown in the graphic above, and selected one period of seemingly abrupt change in CO2 concentration, in the period spanning 128,609 and 135,603 years BP.  The results are shown in Panel A) of the graphic below. 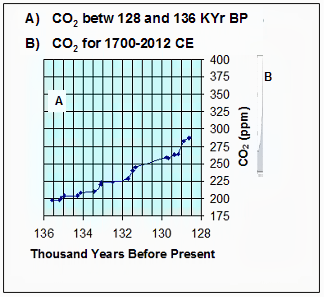 http://www.nature.com/nature/journal/v453/n7193/extref/nature06949-s2.xls.
B) CO2 concentrations for the period prior to and through the Industrial Revolution, from 1700-2012 CE, compressed by this author so that the 300 year interval occupies about the same horizontal distance as it would if it were displayed in panel A) (the time axis runs left-to-right from 1700 to 2012).  This image is the same as presented in the second graphic, above. Source: Scripps Institution of Oceanography; http://bluemoon.ucsd.edu/co2_400/co2_800k_zoom.png.


It is seen that in fact what appears to be an abrupt change in the compressed geological image further above is in fact quite extended.  The CO2 concentration rises from 198 to 287 ppm, or 89 ppm, over a very extended span of 6,994 years, or by 0.013 ppm/yr.

In contrast, the change in CO2 concentration over the industrial revolution is shown in Panel B) in the graphic above.  This is in fact the identical image as shown in the second graphic of this post, covering the 310 years from 1700 to 2012 except that the time scale has been drastically shrunk so that it is about the same time scale as in the geological excerpt of Panel A) (in which each vertical line marks off 500 years).  It is immediately apparent that


a)     the chart in Panel B) starts at a CO2 concentration near the maximum of the geological CO2 record, about 280 ppm and climbs sharply to the 400 ppm level discussed earlier; and


b)     the rate of change of the CO2 concentration in Panel B) is very much steeper than that found in the geological record, averaging to about 0.75 ppm/yr; this is almost 60 times more rapid than the geological change noted above.


a)     geological changes in CO2 levels have practically never exceeded 280 ppm, the level that existed just before humanity embarked on the industrial revolution;


b)     on a time scale relevant to human experience and lifetimes geological changes in CO2 levels change extremely slowly, over periods of many thousands of years;


c)     physical properties of atmospheric CO2 today show unequivocally that the excess CO2 arose in the past century from burning fossil fuels;


d)     virtually the entire increase in contemporary CO2 levels has resulted in concentrations so high that they have never been found in the geological record for 800,000 years;


e)     contemporary CO2 levels continue to increase unabated and at a rate 60 times or greater than in the geological record; and


f)      the rate of growth of contemporary CO2 levels is accelerating.