Summary. Biological science has made tremendous progress since James Watson and Francis Crick presented their model for the structure of deoxyribonucleic acid, DNA.  Their model built on, and provided explanation for, important findings about DNA that were already known.


Since then, important progress has been made, for example, in analyzing the base sequences, i.e., the chemical code, of specific genes and using that information for diagnostic and therapeutic purposes. Gene sequences that identify mutations in breast cancer genes alert physicians to the possibility that virulent malignancies may develop later in life.  Another genetic aberration, in the HER2 protein, permits targeting it with a therapeutic antibody, a major step forward.


Science can only proceed by open-ended inquiry, untainted by preconceived biases.  Unscientific proposals that oppose the results of objective inquiry are unproductive.  They harm society at large by diverting attention and wasting resources.  Human progress relies on critical verification of scientific discovery, and on building further on the progress made.

Allison just left her gynecologist’s office, with a referral to have a breast biopsy.  She was apprehensive, of course, since she had married relatively late, and was worried about her infant son and husband.


Allison had been particularly concerned about her biopsy, because she’s a relatively late-age mother.  While breast cancer can arise in women of all ages, she had only recently had her first child, a son.


A couple of weeks later Allison went in for the biopsy procedure.  In addition to the well-established examination of the samples from the specimen under a microscope, a small portion was also sent for DNA analysis, which searches for a genetic match for a mutation associated with some breast cancer cases.  When such a match is found, the patient is more likely to develop breast cancer during her lifetime. The pathologist found no visual evidence for cancer in Allison’s samples, and the mutant DNA also was not present.


Now, with the negative biopsy result, and the information from the genetic analysis, Allison can continue to enjoy watching her son develop.  But she will be under close medical scrutiny for the possibility that a cancer may develop later, as the years pass.


The modern practice of medicine has benefited enormously from the results of scientific research in the biological and medical sciences.  Here I describe the discovery of the structure of DNA and the genetic code, and the immune system.  The next post discusses the immunology of vaccination and the unproven fears that vaccines may be connected to autism.


DNA and the Genetic Code.  Modern understanding of genetics has progressed dramatically since 1953, when the double helical molecular structure of DNA, the material containing the genetic code of all cells, was worked out by James Watson and Francis Crick (based on additional contributions from Rosalind Franklin). Other renowned scientists of the time had tried but failed to predict the structure.  Watson and Crick discovered that the structure can only be correctly constructed if, considering the four DNA building blocks, an adenine on one strand of the helix is paired with thymine on the opposing strand; and guanine is paired with cytosine (see the graphic below). 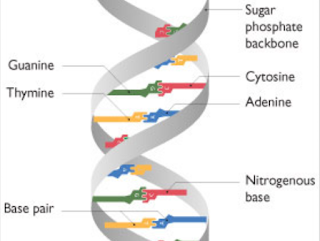 Diagram showing the double helix structure of the DNA molecule.  Guanine (green) on one strand can only bind with cytosine (red) on the other, and thymine (orange) only with adenine (blue).
Source: https://ijarovic.files.wordpress.com/2012/02/dna_helix.jpg?w=580

The sequence of the four building blocks, generally called nitrogenous bases, along the DNA strand, defines a code that specifies how each protein is synthesized in the cell. Proteins are the large molecules that variously define a) how cells go about their molecular business, b) provide structural elements that give cells their sizes and shapes, or c) communicate with neighboring and distant cells of the organism.

Breast Cancer Susceptibility.  As time passed, the base sequences of many single genes in cells have been worked out.  Among them were the two breast cancer, or BRCA, genes, BRCA1 and BRCA2.  A mutant, or variant, form of either of the BRCA genes can be easily identified by a genetic analysis that seeks the occurrence of the mutant base sequence in a subject’s DNA.  Having the mutant form increases the risk for later development of breast cancer by about 50%.

Antibody therapy.  Certain breast cancers can be treated with some new drugs that are the result of major recent advances.  A breast cancer biopsy specimen can be assessed for the presence of a larger than normal level of a surface protein, the human epidermal growth factor receptor 2 (HER2) protein, which makes the cancer highly malignant.  Such breast cancers can be treated with a new biotechnology product, a monoclonal antibody drug called Herceptin®, that binds to and inactivates HER2.

Polyclonal antibodies.  One of the ways that the immune system reacts to, and fights against, a foreign (likely disease-causing) particle, such as a virus, cell, or parasite, is to generate antibodies (a group of special protein molecules) that specifically react against particular structures on the particle (the antigen).   The antibodies bind molecule-to-molecule to the antigen, inactivating the particle.

Our natural immune system works by creating many antibody proteins that differ at the molecular level one from another, but that all bind to the foreign particle.  Each antibody protein arises from a distinct, specific cell in the immune system.  Because the natural immune reaction generates this large number of antibody species, collectively they are called polyclonal antibodies (see the image below).

Left: Polyclonal antibody molecules (dark gray) in a sample bind different portions (colored pairs) of an antigen.  Right:  After selection of one of the antibody species, the antibody sample contains only one kind of antibody molecule, a monoclonal antibody, that binds only one portion of the antigen (blue pairs).
Source: http://absoluteantibody.com/antibody-resources/antibody-overview/antibodies-as-tools/

Monoclonal antibodies. Immunological research revealed that different antibody molecules in the polyclonal set bind differently to the antigen (see the image above).  Some that bind weakly only partly inactivate the antigen, whereas others that bind quite tightly are efficient as inactivators.


In 1975, Georges Köhler and César Milstein (Nature, 1975 Aug 7;256(5517):495-7), developed a technique that separated immune cells from one another, as well as creating hybrid cell fusions that never died. They cultured each isolated immune cell in a growth medium so that each culture now contained the daughter cells originating from a single fusion cell.  Now the antibody molecules in each culture were all identical to one another.  These are called monoclonal antibodies (see the image above).  The resulting monoclonal antibodies could be tested for how well they neutralized the antigen.


Herceptin® is the trade name for a monoclonal antibody drug that reacts specifically with the HER2 protein on a tumor cell surface, preventing the normal functioning of the receptor and inhibiting tumor growth.  In essence Herceptin® treats HER2, a normal constituent of human cells, as a foreign substance, attacking and inactivating it.


Remarkable advances in biological and medical science have been made since the discovery of the DNA double helix and the identification of the genetic code.  Since about 2000 we have the sequences of all the genes in human DNA.  This permits identification of normal and pathological conditions in humans.  Understanding of the origins of many cancers has resulted, and has led to new therapies.  Among these is cancer immunotherapy, in which antibodies are created to antigens on cancer cells, as if the cancers were foreign invaders like viruses and bacteria.


Science advances by the objective pursuit of new information about the natural world.  The results frequently lead to practical applications that improve our health and prolong lives.  The intrinsic value of scientific study should be defended and supported by all to continue its progress.
© 2017 Henry Auer