Light And Heat – The Greenhouse Effect

Summary:  Global warming is attributed to a greenhouse effect occurring in the atmosphere as a result of the accumulation of excess amounts of carbon dioxide, methane, nitrogen oxides and other “greenhouse gases”.  Sound methods of objective scientific investigation have shown that the excess levels of these gases is due to human activity, namely, the burning of fossil fuels that produce CO2 on combustion.  This blog posting provides an explanation of the greenhouse effect in general, and shows why carbon dioxide is a greenhouse gas.  A brief discussion is presented in the paragraphs immediately following.  Expanded explanations are found in the Notes further below that are referenced in the discussion.
The Greenhouse Effect.  The greenhouse effect refers to the fact that a glass greenhouse (or a car interior) maintains a warmer temperature inside the greenhouse than outside when the sun shines on it.  This happens because glass is transparent to sunlight, permitting the sun’s light to reach the inside of the greenhouse.  Some of the heat released by the incident sunlight is trapped by the glass, retaining much of the heat inside the greenhouse.
Colored objects convert visible light to heat. Whenever light from the sun strikes a colored object on the face of the earth, the object absorbs some of that light (see Note 1).  All light is actually a form of energy.  The energy in visible light that is absorbed by the colored object is re-emitted as heat energy, invisible to the human eye, called infrared radiation (see Note 2).
Greenhouses trap some of the heat radiation. In a greenhouse, as we noted, the glass lets the sunlight through.  Plants, soil and other objects in the greenhouse absorb the sunlight, and re-radiate heat energy as a result.  If these objects were in the open, the heat would radiate out into the atmosphere.  But in a greenhouse, the glass panes actually absorb a part of the heat radiation and don’t let it radiate back out.  The glass traps the heat inside the greenhouse, keeping all its contents warmer than the outside air.
﻿Greenhouse gases trap heat in the earth’s atmosphere. Greenhouse gases such as carbon dioxide (CO2) in the earth’s atmosphere work in exactly the same way.  They are transparent to visible sunlight, but absorb some of the heat radiation in the infrared portion of the spectrum, retaining the heat within the atmosphere and emitting some of it back to the surface (see the graphic below, and Notes 3 and 4).

Rising CO2 levels result in global warming. Over the course of the eons during which CO2 concentrations were constant in the atmosphere, temperatures were within a range that permitted life forms to develop and branch out on our planet.  But now, in a relatively short period on the geologic time scale, man-made CO2 arising from the burning of fossil fuels  is being added to the atmosphere.  Climate scientists are finding that the greenhouse effect of the added CO2 is increasing, making global temperatures warmer.  This effect has been most pronounced over the past 50 or so years, and especially so in the recent two decades.  The graphic below shows superimposed measurements of CO2 concentrations in the air and global temperatures from 1880 to 2004.
﻿﻿﻿
﻿﻿﻿

It’s quite apparent that the two trends are fully correlated with each other, showing that it is highly likely that the higher CO2 concentration is directly responsible for the warming trend because of the greenhouse effect.
Other gases are also greenhouse gases.  Among the most significant is methane, the gas of natural gas (see Note 5).
Conclusion: From this discussion we understand how atmospheric CO2, methane and certain other gases behave as greenhouse gases, and that the greenhouse effect is increasing as we burn more fossil fuels and release more and more CO2 into the atmosphere.  The greenhouse effect is leading to global warming.  Thus it should be a high priority for all of humanity to minimize the burning of fossil fuels, and to develop programs that combat the effects of the higher amounts of CO2 already present.
*  *  *  *
NOTES
Note 1. We all know that white objects absorb little or no sunlight.  But consider the light from the sun that does strike an object.  Sunlight is made up partly of visible light of all the colors of the rainbow, from violet all the way to red; this is called the visible spectrum.  This is also seen when light passes through, for example, a crystal chandelier or a glass prism, displaying the rainbow spectrum.  This is shown in the graphic below.
Objects we perceive as having color, such as a green leaf, or the orange color of autumn leaves, absorb some of the colors in sunlight but reflect back the remaining colors (see the graphic below).  ﻿﻿ ﻿﻿﻿﻿﻿﻿
﻿﻿﻿﻿﻿﻿﻿﻿﻿ ﻿﻿

Greenhouse0-mrnice.nl
Chlorophylls and carotenoids are the pigments in green leaves that give them their color.  The chlorophylls a and b in the leaf absorb the violet-blue and red ends of the spectrum, reflecting back the unabsorbed greens and yellows (the higher the line, the more light of that color of the spectrum is absorbed).  These unabsorbed greens and yellows are the colors we see.  The carotenoids absorb the bluish and greenish parts of the spectrum and reflect back the oranges and reds, which are the colors we see in autumn.  Black objects appear black because they absorb all the colors of the visible spectrum; we should consider the black to be actually the absence of any light whatsoever.  The visible light absorbed is radiated back as heat, or infrared light (see Note 2).﻿
Note 2. It’s known from physics that light is actually a transmission of energy.  The energy absorbed  by colored objects (Note 1) is converted to a different part of the energy spectrum, the infrared spectrum (infra means below, meaning below the  red light of the visible spectrum), which is felt as heat.  The light contained in the visible, or rainbow, spectrum is not heat energy in and of itself.  Rather, colored objects feel warm in sunlight because of the conversion to heat, or infrared radiation (see the graphic below, showing the infrared portion in the spectrum of light radiation).  Black objects absorb the most light and so feel the warmest, while light shades absorb considerably less and don’t feel warm in the sun.
﻿
﻿

Note 3. Over the lifetime of the earth, as life forms emerged and spread, over more than a billion years, the earth’s atmosphere accumulated a certain level of carbon dioxide partly as a result of metabolism of carbon compounds by the living beings.  Through the eons that carbon dioxide has been recycled out of the atmosphere partly by photosynthesis, which re-incorporated it back into plant matter, or biomass.  In the history of the earth, these balancing processes maintained the carbon dioxide level relatively constant within certain limits of variation, such that up to the beginning of the industrial revolution the amount of carbon dioxide in the atmosphere was about 280 parts per million (ppm).  Today however, as a result of man’s burning fossil fuels for energy, the CO2 concentration is now about 380 ppm, and growing.

Note 4. Why is CO2 a greenhouse gas?  Most molecules behave as if they have a “color” in the part of the unseen light spectrum that transmits heat.  This is called the infrared spectrum (see the graphic in Note 2).  Different molecules have different “colors” in the infrared part of the spectrum, just like different substances having different colors to our eyes in the visible spectrum (such as the chlorophylls and carotenoids in the graphic in Note 1).  Atmospheric CO2, while permitting the visible light of sunlight to pass unimpeded through the air to the ground, does have an infrared “color”, and partially absorbs heat radiated back into the atmosphere from the surface of the earth after colored objects have absorbed sunlight (see the graphic below; here absorbed infrared radiation is indicated in the downward troughs, and transmitted or unabsorbed light is shown by the flat portions at the top). 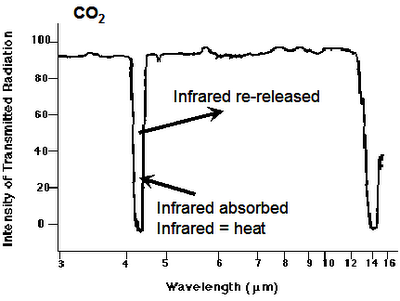 The absorbed infrared radiation is re-released in all directions, including back into the atmosphere and down to the earth’s surface.  The heat absorbed by the CO2 would otherwise radiate without hindrance into outer space.  Thus atmospheric CO2 retains a portion of the heat ultimately provided by sunlight via the re-radiation of heat from the earth’s surface.  This retained heat keeps the atmospheric temperature somewhat warmer than it otherwise would be.  In this way CO2 and other greenhouse gases act just as the glass in a greenhouse does.
Note 5. Methane has an infrared “color” that is much stronger than that of CO2.  Molecule for molecule, methane is about 25-40 more effective in absorbing heat than is CO2.  For this reason, scientists working on global warming are very concerned about methane, although its concentration in air is less than 1% of the concentration of CO2.  This is why there’s an interest in reducing the amount of methane arising from dairy cows and other domesticated animals that chew the cud.  The bacteria in the rumen of these animals produce large amounts of methane that are belched out by the animals.  Methane is also sequestered as a solid crystalline ice hydrate in arctic tundras.  This methane originated from the decay of organic matter in the tundra’s vegetation.  As the tundra melts due to global warming, large amounts of methane are melted out of the hydrate crystals and released into the atmosphere, which contributes to warming even more.  This is one way that global warming is accelerating its own progress on Earth.
Posted by Henry Auer at 10:51 PM