The Obama administration granted conditional approval to Shell Oil Company to begin exploratory drilling in the Arctic Ocean off the North Slope of Alaska on May 11, 2015 .  In addition to generating grave misgivings about possible environmental damage from drilling accidents, this decision represents a major compromise with the President’s own policies directed toward limiting global warming.  Burning any fossil fuel, such as the oil sought in this project, will add still more carbon dioxide (CO2) to the atmosphere, worsening the burden of greenhouse gases added to the earth’s air.


In his second inaugural address of , the President committed to “respond to the threat of climate change, knowing that the failure to do so would betray our children and future generations”.  Noting the recurrence of severe weather and climate events, he stated “none can avoid the devastating impact of raging fires and crippling drought and more powerful storms”.   In order to combat these trends, the President summoned the nation not to “resist this transition” to “sustainable energy sources”, but rather to “lead it” by developing the new “technology that will power new jobs and new industries”.


The President, in his State of the Union address the following year () pursued the same theme.  He stated a highly profound and basic motivation for attacking the problem of global warming:


“Climate change is a fact.  And when our children’s children look us in the eye and ask if we did all we could to leave them a safer, more stable world, with new sources of energy, I want us to be able to say yes, we did.”


The “all-of-the-above” energy strategy is intended to promote economic growth and job creation, enhance energy security, and develop a low-carbon energy economy.  To the extent that ensuring energy security relies on exactly those “last century” strategies based on fossil fuels, “all-of-the-above” pits continued exploitation of fossil fuels against much smaller, but rapidly growing, renewable energy industries.


The President, to his credit, has indeed set out policies that will reduce emissions of CO2 from sources.  Emissions from passenger vehicles will be much lower since the fuel efficiency standard for cars and light trucks is to reach an average level of 54.5 mpg by 2025.  New standards for heavy-duty trucks are to be issued in 2016.  The proposed Clean Power Plan, to be finalized later in 2015, will lower emissions from large electricity generating plants by 30% below 2005 levels by 2030.  These policies are significant positive developments along a path to lowering emissions produced by the U. S.


On the other hand the Obama administration has made many decisions that could expand production of fossil fuels beyond their present extent.  Its approval of exploratory drilling in the by Shell is only the latest policy shift away from minimizing further emission of CO2 and other greenhouse gases.  It is also authorizing extensive new coal mining operations in the in and .  And it has announced that leases for oil exploration in the Atlantic Ocean off the U. S. east coast could be issued beginning in 2021.  Its decision whether to approve the Keystone XL pipeline that would bring Canadian tar sands oil to the is still pending.


Expanded development of fossil fuels requires the investment of large amounts of capital.  When considering expansion of our energy economy an important question always is how to deploy new investments.  In order to minimize new emissions of greenhouse gases it is important to direct such investment toward renewable energy, not to the further expansion of fossil fuel resources.  Decisions to extract more fossil fuels have long-lasting consequences, since such projects will take several years to reach fruition, and will lock in new greenhouse gas emissions for decades thereafter.  This directly interferes with achieving our goal of lowering new greenhouse gas emission rates.  Instead, it would be best to allow existing fossil fuel-burning assets to exhaust their useful lifetimes, and to replace them with renewable energy resources.


Coal is the worst among the fossil fuels in terms of greenhouse gas efficiency: burning coal generates a little more than half as much heat as natural gas per ton of CO2 emitted.  Although the administration’s Clean Power Plan would have the effect of phasing out most coal-fired electric plants on the one hand, on the other the administration is opting to expand coal mining.  Since demand for coal will be reduced within the , it is clear that newly mined coal would be destined for export.  The should not be contributing to expanded use of this inefficient fuel abroad at a time when international efforts are being directed to reduce greenhouse gas emissions.


Cars powered by internal combustion engines are very inefficient in their use of the energy contained in the fuel they burn.  Approximately 80% of that energy is dissipated, mostly as waste heat, rather than used to propel the vehicle along the road.  This is illustrated in the graphic below. 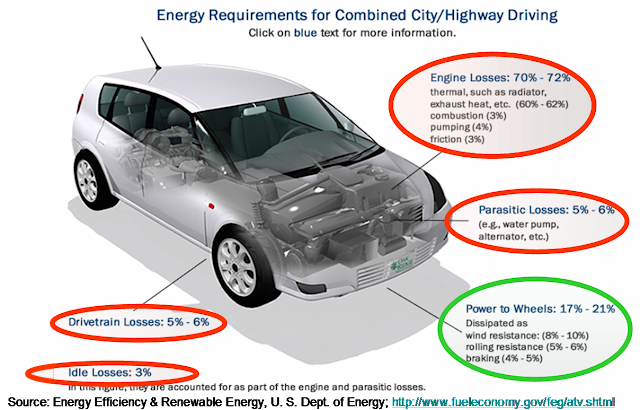