The public, when contemplating global warming, includes those who question whether warming underlies the occurrence of extreme weather and climate events.  The National Academies of Science, Engineering and Medicine recently issued a report, “Attribution of Extreme Weather Events in the Context of Climate Change”.  It emphasizes that the appropriate format for questions concerning this issue can be phrased in terms such as “Are events of this severity becoming more or less likely because of climate change?”


The report emphasizes that because of rapid advances in data analysis and climate modeling the severity of many extreme events can be attributed to contributing factors arising from warming.  It includes a schematic image, shown here, characterizing how the increasing degree of understanding of various types of events leads to increasing confidence in the degree to which we can attribute severity to contributions from global warming.


This post concludes with a selection of examples from the climate literature where such analyses have been made, leading to affirmative statements of attribution such as considered here.

Recently weather news has reported on extreme events in many regions of the world.

These few anecdotes are potentially significant indicators of the effect that global warming is having at regional and local levels around the world.  Indeed, increased rates of occurrence of such phenomena are predicted with high confidence in recent global warming reports.  But in discussing the role of warming at the scale of such geographically small areas it is important to evaluate whether each one in fact is related to warming.  For example, if few or none are, climate science would be hard pressed to persuade policymakers and the public to undertake efforts to minimize further warming and adapt to its effects.  On the other hand, if it can be shown that there is indeed a contribution from warming, then climate science is justified in actively pursuing appropriate policies such as those agreed to at the United Nations conference in Paris in December 2015.

Here we discuss the question of whether, and how, extreme events can be attributed to global warming.


The U. S. National Academies of Sciences, Engineering, and Medicine issued the report “Attribution of Extreme Weather Events in the Context of Climate Change” (2016); : The National Academies Press (the Report) on .  The Report emphasizes that extreme events, just as all our weather every day, results from the interactions of many atmospheric forces and processes.  For this reason, it makes the very important point that we can not justifiably ask a question such as “Was this extreme event caused by [man-made] climate change, yes or no?”  Such a simplified black-or-white question overlooks the complexity in climate and weather.


Rather the Report offers different questions phrased as “Are events of this severity becoming more or less likely because of climate change?”; or, for single events such as local storms, the question could be “To what extent was the storm intensified, or its precipitation increased, because of climate change?”  Note that the questions deemed appropriate seek expressions of likelihood, rather than the certainty demanded by the yes-or-no question.  To any viewer of a televised weather forecast this should hardly be surprising.  After all, these daily predictions always provide likelihoods for sunshine (clear, partly cloudy, mostly cloudy, etc.) as well as percent probabilities of rain, sleet or snow.  In the same way, and for the same reasons, the Report concludes that statements of attribution should be phrased in terms of the probability or likelihood that global warming was a climatic factor contributing to the occurrence of the extreme event.


The Report summarizes its detailed deliberations about attribution of events to known or understandable contributing factors with a simplified conceptual diagram, shown here 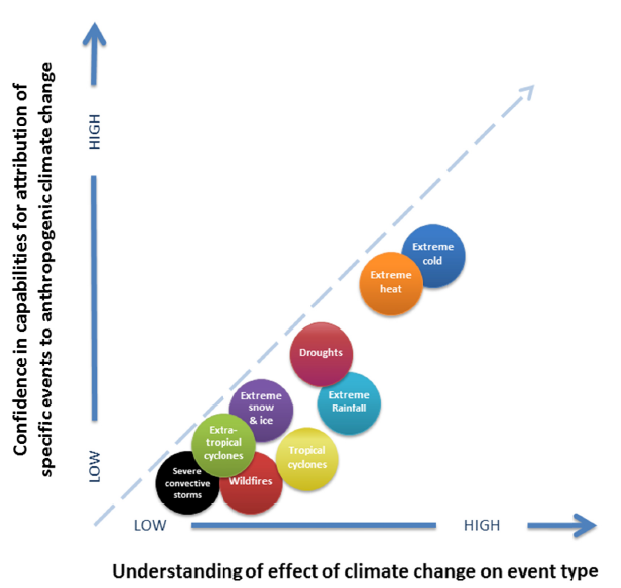