Summary.  Sea level rise is caused by expansion of ocean water as the world’s temperature rises, and by net melting of glaciers, ice sheets and ice shelves.  Ice will continue melting as long as the temperature remains above the freezing point.


Sea level rise is already impacting coastal cities in the and elsewhere.  Regular flooding based on high tide schedules is now happening, for example, in and


Climate models project future increases in sea level rise in all scenarios examined, for modeling as distant as 300 years from now.  This will clearly damage coastal cities around the world, inflicting major property damage and requiring extensive, expensive renovation projects.


The recent report by the Risky Business Project advocates taking a business-oriented risk assessment approach to global warming.  As applied to the occurrence of sea level rise, risk management involves assessing harms and evaluating investments in both adaptation to continued sea level rise and mitigation of continued global warming.  Such investments would benefit people by protecting them from future harms arising from sea level rise, and by expanding economic activity from new projects undertaken.


Introduction.  An earlier post provided a tutorial explaining the sources of global sea level rise ().  One important factor is the increase in volume that the waters of the oceans occupy as their temperature increases.  Since the oceans are contained, the only way to accommodate the increased volume is to expand upward, contributing to .  The second significant contribution comes from melting of ice that originates from a land-based source.  Glaciers and ice sheets, exposed to air on their upper surfaces, melt whenever the air temperature is higher than the melting point of water.  Ice shelves, driven from land-based ice sheets to float on the ocean, melt from below whenever the sea water temperature is above its freezing point.


Sea level rise is already affecting the U. S.


.  On the (U. S.) PBS NewsHour broadcast a news feature on ocean flooding in .  The frame below, taken from the broadcast, shows a street in Miami Beach, a municipality built on a barrier island facing the Atlantic Ocean, flooded with ocean water on a sunny day. 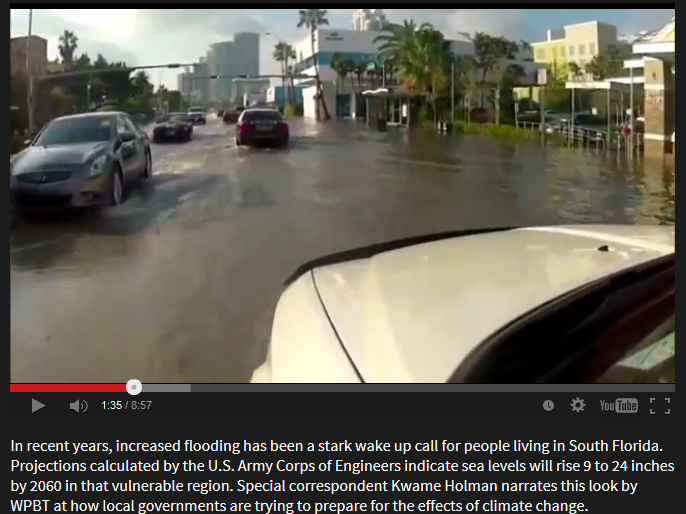 
In response, the Miami Beach Public Works Department initially planned a US$200 million remediation program over the next 20 years to fend off flooding and encroachment by the ocean.  Recently the agreed to double its investment, to US$400 million.  More broadly, a four-county consortium in the area is planning a concerted program to address the expected sea level rise.  The local politicians are grappling with the political pressures opposing the extensive investments needed to prepare for the expected worsening of the problem.


A conference in June 2012 on the effect of global warming  focused on the projected loss of land area in over the next century due to sea level rise.  It is foreseen that the Florida Key islands would be lost, and that and the surrounding area would be small islands in the encroaching .  The report notes that this area has the most people and property endangered by sea level rise of any in the U. S.


.  is at the confluence of the , and the .  It is the site of a major base of the U. S. Navy which is a principal driver of economic activity in the region.  The area has been subjected to continued episodes of tidal flooding along its coastline.  In a report on the PBS Newshour in December 2012 its mayor, Paul Fraim noted that the city is repeatedly flooded at high tides, which is worsening with passing time.  The screen shot below shows a home that been repeatedly flooded in recent times. 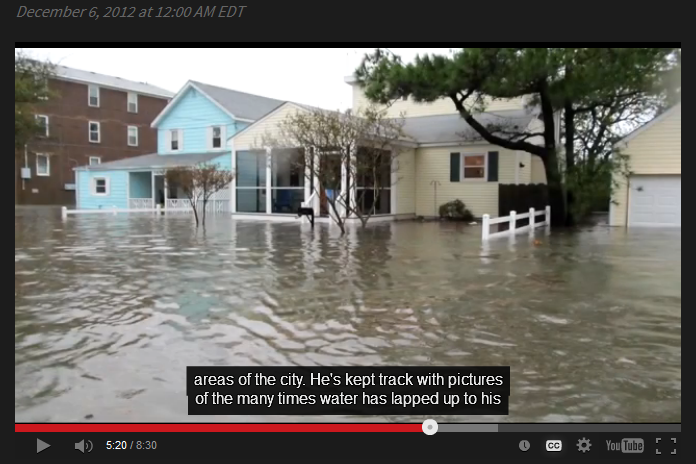 Still frame from PBS Newshour broadcast on sea level rise affecting   The photo shows the home of Bob Parsons, who has documented the many times flooding has affected his home.
Source: http://www.pbs.org/newshour/bb/politics-july-dec12-norfolk_12-06/.
The mayor stated that parts of the city might not be habitable in 15 years, and that the city is already renovating impacted areas by raising home structures to higher levels, and raising roads.  Relocation to higher ground is also envisioned.  The U. S. Navy is replacing 14 piers because of rising water at a cost of US$490-560 million.
The Washington Post reported that according to the U. S. National Oceanic and Atmospheric Administration, Norfolk, together with a 600 mile section along the U. S. East Coast, is a “sea level rise hotspot”, with expected to be 3-4 times the worldwide average.  Much of this is due to a change in the Atlantic Ocean Gulf Stream that directs more water toward the eastern shore.  in addition is slowly subsiding into the sea due to geological factors.  A Virginia study projects that in the Norfolk area could be 5 ½ feet (1.68 m) by the end of this century if the world does not institute mitigation measures to curb global warming.
The report states that engaged a Dutch firm to design an adaptation plan to protect the city.  The resulting project, involving new flood gates, building higher roads and renovating the storm sewer system would protect against water 1 foot (31 cm) higher, and cost US$1 billion, more than the city’s current annual budget.
Sea Level Rise Around the U. S.  An interactive map of coastal and tidal regions susceptible to ocean flooding around the shows the increasing loss of land area as the sea level rises between 1 foot and 9 feet (30 cm and 274 cm).
Projections of future show severe further effects to the year 2100, and the year 2300.  Schaeffer and coworkers (Nature Climate Change 2012; DOI: 10.1038/NCLIMATE1584) developed projections based on the warming trajectories arising from several scenarios for emissions of greenhouse gases.  These range from a continued annual emissions rate in an essentially unconstrained scenario to one with a hypothetical stringent reduction to a zero emissions rate in 2016.  Their results are summarized in the following graphic. 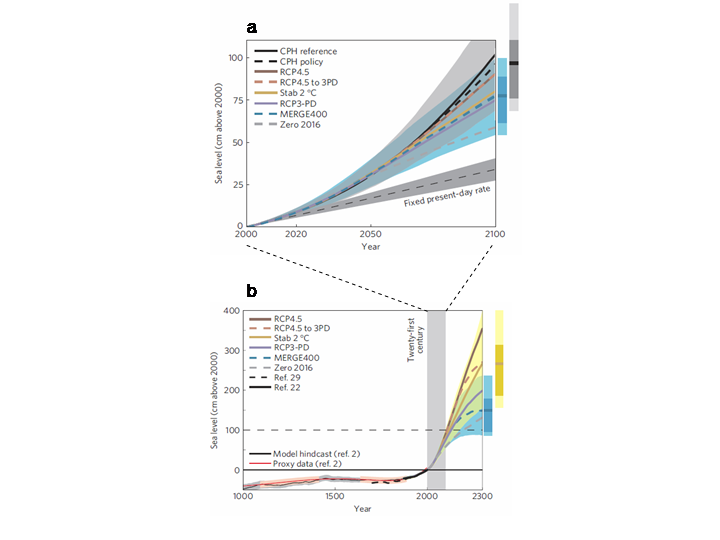 Projected sea level rise under various greenhouse gas emission scenarios, ranging from unconstrained ( reference) to stringent reduction to zero emissions in 2016 (Zero 2016).  The colored bands give full uncertainty values within the graphic, and the shaded bars to the right, for only two cases, the lowest and highest projections.  Note that the time axis (horizontal) and the axis (vertical) use different scales in a and b.  a, Projections for 2000-2100; the vertical scale runs to about 43 in. b, Historical data from 1000 to 2000, and projections from 2000 to 2300 with the vertical gray shading showing the present 21st century; the vertical scale runs to about 13 feet.
Source: Adapted from Schaeffer and coworkers, http://www.nature.com/nclimate/journal/v2/n12/full/nclimate1584.html?WT.ec_id=NCLIMATE-201212.
The results of Schaeffer and coworkers reflect in numbers the notions expressed in the Introduction; namely, that as long as the global temperature operates to keep temperatures over land ice, and under ocean-based ice shelves, above their melting points, ice will melt and contribute to further .  Temperature-induced expansion of the oceans continues in scenarios with continued emissions of greenhouse gases (the upper projections in the graphics), but this writer presumes that this contribution is reduced in scenarios with limits on emissions (lower projections in the graphics).  And since global temperature depends on the total accumulated level of greenhouse gases in the atmosphere, the temperature cannot go back to lower values, low enough to keep ice sheets and ice shelves frozen.  In contrast, panel b in the graphic above shows that sea level was essentially unchanged from the year 1000 until the beginning of the industrial revolution when humanity began burning fossil fuels.
Conclusion
The recent Risky Business report highlights the important role that risk analysis can play in planning future responses to global warming.  The effects of warming can be viewed as shifting a probability curve giving the likelihood of occurrence of an extreme event with major damaging effects “to the right”, i.e., in the direction of higher likelihood of occurrence.  An example drawn from the topic of this post could be an extreme effect from sea flooding due to rising temperatures.  Such disasters wreak significant socioeconomic hardship on those affected.  The report suggests that risk management could develop programs for investing in infrastructure to minimize future risk.
The risk of harms from is extremely high, according to the model projections shown in the graphic above.  In the framework of the Risky Business report, risk management under these circumstances leads to the conclusion that investments to help mitigate further warming, as well as adaptive investments to strengthen infrastructure to withstand , are both warranted.  Risk management should be adopted worldwide, since global warming is a universal phenomenon involving all nations that emit greenhouse gases, and the effects of likewise are felt worldwide.
The risks arise because around the world, many cities are situated along coastlines, and as countries develop their populations tend to leave rural settings and gravitate to their cities.  Among developed countries also, many cities are in coastal settings.
Focusing on the , the examples of regular inundations from the ocean, described above, are not exceptional.  aggravates tidal flooding, and sets the stage for more damaging storm surges in extreme weather events.  The financial costs of such damages are very large, and are met from public coffers and private risk insurance.  Both these coverages will increase as worsens.
Risk management entails investments that would both minimize further warming and protect against damage when threats are present.  Such investment would help lower future damage costs, and contribute significantly to the economy by increasing employment in the industries involved.  Thus the risk management evaluation of and its attendant damages leads to activities that minimize future harms to coastal communities and expands economic growth.  Both of these outcomes are highly desirable.
© 2014 Henry Auer
Posted by Henry Auer at 9:02 PM